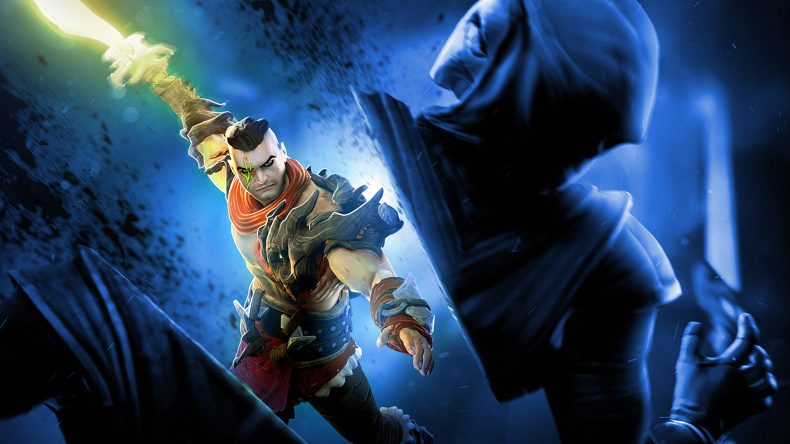 Warlander had my attention as soon as I saw the gameplay in motion. The lightsabre-esque weapon, the Soulslike-like combat, the striking aesthetic – they all added up to a game I’d have given up bacon to get hold of. Unfortunately, like my Tinder profile picture it turned out to be somewhat misleading and the reality is a far less impressive affair. I bet Warlander doesn’t really have an interest in fine dining, either.

While it’s sadly fairly common these days to be catfished by an early access game, you still can’t help but take it personally, and Warlander, frankly, hurt. It sold me on its promise of tactical combat and “Slay the Spire meets Dark Souls” hyperbole, but the truth is a little different. You play as Bruce, a hero whose name is about as imaginative as his backstory, who awakens after the destruction of his village by The Villain, and is given a magic lightsa… laser sword? Light sword? Anyway, it’s called Ferguson for some reason, and is promptly told that he has been imbued with the powers of the Forest to defeat the evil Technos. As subtext goes this is about the equivalent of getting hit by a bus with the word “subtext” written on it in burning oil. You’re then thrown into an admittedly very pretty world separated into individual nodes containing either enemies, power ups, merchants of a sort, or scenery. This is where the callback to Slay the Spire comes from as you can pick your path through the game, node to node, and it’s all randomly generated. Unfortunately, random is a bit of an understatement here in that there is literally no pattern to it whatsoever. You can’t do anything to influence what might come next and the game does nothing behind the scenes to balance it, so it’s possible to get three screens of bugger all followed by a boss fight that you’ll almost certainly lose unless you were born already “gud”.

The combat is actually pretty decent though – or it would be if Warlander would allow you to play with at least the industry standard toolset. Despite the controller layout proclaiming quite clearly that Q or the Right Stick will lock on to an enemy, this feature is simply not in the game. You also can’t invert the Y-axis on a controller which is the gaming equivalent of a ring-dial telephone. As a result I abandoned the controller for the Mouse and Keyboard which let me control Warlander in roughly the same way as my washing line controls my pants during a storm. The default sensitivity is very high, but once I slid it back I was able to at least look around each area without giving Bruce whiplash.

Once you find a flow, the combat does elevate the game above its mediocre story. You’ll likely have to fight with it, and while I don’t mind “gitting gud” I’m well within my rights to demand that the game do so first. Combat in Warlander is about dismemberment, and let’s be honest here, good dismemberment physics improve everything, in games or otherwise. It’s ridiculously satisfying to sever heads and arms, and if you time your parries right and break the enemy’s guard, you can slice ‘em up like glowing salami. A variety of special moves become available as you progress, including a sword throw and the ability to control vines, which do mix it up somewhat. Interestingly, Bruce’s upgrade currency is derived from the apostate limbs of his Techno enemies, so the more you kill, the easier it is to improve – which makes it doubly infuriating during runs where you have very few occupied nodes. You’d be forgiven for thinking Warlander was still in Early Access, as the undercooked story presents little other than context, the oddly comedic names feel like placeholders, and the combat is clearly not fully formed. There are few options to adjust, and very little meaningful progression beyond just pushing on for the sake of it. Even if you do enjoy the combat, and you may as it’s certainly a long way from awful, the constant repetition of the same handful of conversations between Bruce and Ferguson will make it hard to enjoy anything in between the combat, and minor bugs and glitches in the movement and visuals don’t help.

It’s hard to work out why Warlander couldn’t have had a few more months on the workbench, to be brutally honest. It’s trite to say something “has potential but”, but Warlander really does have potential but. It feels more like a demo than a finished game, and after a few patches may well be able to stand at least on line with other mid-tier roguelites and action adventures. As it is at launch, though, it’s simply not the full package.

Nice aesthetic
Dismemberment is satisfying
Ferguson looks like a lightsaber

After a few patches, Warlander may well be able to stand at least in line with other mid-tier roguelites and action adventures, but right now... not so much.