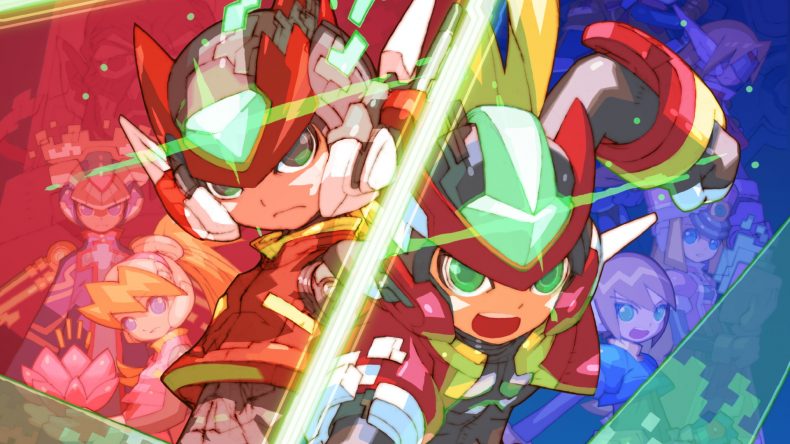 Bringing collections of retro games to a newer console isn’t a new concept. Bundling together a few of the classics for a new or nostalgic audience is a surefire way to excite fans of a classic gaming series. This generation there have been 4 Mega Man collections released alone, and now every game from the original and X series is playable on your modern console. Capcom was obviously worried that this still wasn’t enough for fans of the blue bomber, and thus Mega Man Zero/ZX Legacy collection was born.

Mega Man Zero/ZX Legacy collection is a bundle of 4 Game Boy Advance games and 2 DS games, consisting of Mega Man Zero 1-4, ZX, and ZX advent. The games all share a lot of the same DNA, and you’ll spend a lot of time switching from beam sword to blaster, navigating treacherous levels and taking on sinister robot foes. Whether it’s the GBA or DS games you opt to play though, don’t expect an easy ride – these games are incredibly tough. The Zero series follows the reawakened titular Zero, as he helps scientist Ciel overcome armies of Reploids, and a variety of overarching evil characters throughout the series. Both ZX and Advent have two selectable characters (with minor differences depending on who you pick) who fuse with powerful Biometal to fight Mavericks threatening the newfound peace between robots and humans. All six of the games have a surprising amount of story to propel you into different slashing and blasting situations.

The Mega Man Zero titles will see you selecting missions to fight enemy bosses (often, as is Mega Man tradition, in an order of your choosing). Each stage leads you to a boss, which you’ll have to learn the attack pattern of, and defeat with the variety of weapons and elemental chips you have at your disposal. Each of your weapons level up from frequent use, gaining new charge attacks and abilities to help you overcome the Reploids in your path. My favourite weapon is the Shield Boomerang, which reflects enemy fire and can be thrown Captain America style.

As well as upgrading your weaponry and applying elemental damage to your attacks, you also gather a selection of helpful Cyber-Elves on your quest. These equippable little cuties provide buffs for Zero, ranging from standard health and defense boosts to freezing enemies or even rescuing you from a bottomless pit. Combining the power of the Cyber-Elves with your best weaponry and own skill is the only way you’ll have a chance of beating the series linear stages. Whereas the Zero games are all about beating individual missions, the DS games have more Metroidvania elements to them. Although there are still missions to beat on your journey to defeat the robot nasties, this time around you’ll need to navigate the open world to find their location using new transformations and key cards.

Whereas selecting weapons and elements is how you overcome obstacles in the Zero games, the ZX series is all about transforming into entirely different robot forms suited for the enemies in your path. Some forms are more agile than others with hovering capabilities, whereas others may specialise in melee or ranged warfare. Defeating a particularly tough boss and then gaining the ability to turn into them on the fly is a very satisfying loop, especially when it opens up a new area for you to explore.

Managing to progress far enough into any of the 6 games to see these interesting weapons and transformations would be no easy feat, if not for the new difficulty selections and saving options added to Mega Man Zero/ZX legacy collection. Casual Scenario mode can be turned on to turn you into a much more powerful killing machine, with buffed firepower and defense to make defeating the bosses to experience the games’ story a breeze. If the punishing lack of checkpoints is what’s putting you off beating the metal menace, Save Assist adds a few welcome checkpoints into the missions. Save Assist especially feels like a great addition to these games, and makes these classic games much more accessible. Outside of the difficulty adjusting modes, the main new way to play these games is the Z Chaser mode. In Z Chaser you are given a fully upgraded character, and challenged to beat the time of another player in a specific mission of one of the six games. There are 2 levels from each game, and options to split the screen in different ways to watch the other player’s progress as you play. Although not a mode that anyone but the most die hard time trial players will get much mileage out of, it’s a nice addition to the collection that would’ve been impossible to do on the original hardware.

Unfortunately there is one significant issue is taking retro portable games and releasing them on modern consoles, and it is purely graphical. Stretching a game originally made for a 2.9 inch screen onto even a modest TV just doesn’t look good. There are some filter options to smooth out the pixels, but no matter how you spin it these games are going to look a little ugly on the big screen.

Mega Man Zero/ZX Legacy Collection is home to 6 very enjoyable (and varied) games in the Mega Man series. The new difficulty options make these challenging games much more welcoming, and are worth the price of admission alone. If you can get over how the games look stretched on modern home consoles (or if you’re planning on buying the Switch version) then you’ll find hours of classic run and gun action to enjoy here.

Although not the most visually pleasing games stretched onto modern setups, it's hard to argue with the level of quality in these six great games. With some added accessibility options, this collection is well worth replaying.