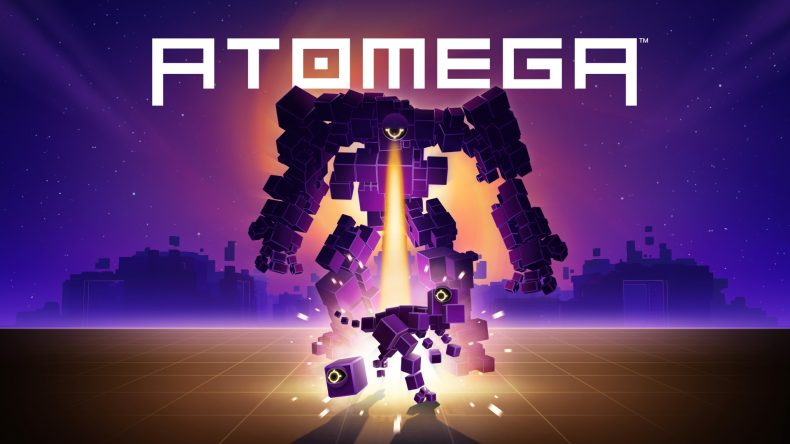 If you’d have told me that the team behind Grow Home and Grow Up, Ubisoft Reflections’ next game would be a PvP shooter, I would’ve told you to get out of my office. If I had an office. Whatever, the point is, it’s not at all what I expected. Yet here it is, with Atomega.

It’s not your typical PvP affair, however, as the focus is as much on collecting as it is on shooting. In fact, it’s entirely possible to do well without ever firing a shot. You start each game as a little ball of light, and your goal is to grow by consuming purple cubes of varying size. This has you morphing into different forms, for no other reason than to present a target for your competitors to aim for. It’s cute to see you dinosaur-shaped shadow as you bound along in search of your next cube meal, or at least it would be cute if you weren’t constantly on the lookout for other players. Obviously, the bigger the form you take, the bigger the target you present. Smaller forms might do less damage, but they can fit into little gaps to get away from incoming fire and get around the defences of a big ol’ Prime form, for example. Combine this with the Steal power and you can essentially swap forms with an enemy by nabbing their bulk and grafting it onto yourself. These powers can really change the tide of a game; collecting yellow cubes gives you a random ability, much like Mario Kart, and can be activated as and when you need. These range from the stealing ability I just mentioned, to Magnetise, which draws in cubes as you pass them, Grow, which doubles the amount each cube fills your growth meter, and more besides, which I suggest you learn how to use effectively if you want to win.

If you’re taking damage and are about to be “deformed,” which is the game’s less unpleasant way of saying you’re deader than corduroy, you’ll be prompted to teleport out of the fray. Doing this will forfeit your current form, knocking you down one level, but it’ll keep you in the running to becoming an Omega. Overwatch has its Ultimate abilities, Destiny has its Supers, others have their airstrikes and their Titanfalls, but none of them have made me feel cooler than turning into a giant that shoots a stream of powerful energy from its face, literally towering over the entire map. The first time this happened to me, it was just seconds after another player became an Omega and we had an epic face-off that felt like something out of Pacific Rim. Only without the Kaiju. Or that buff Australian fella and Idris Elba. It doesn’t last, though. An Omega form’s time is finite, but collecting cubes and damaging competitors will prolong that life span. If you’re a smaller creature, the message that another has turned Omega will let you know exactly where that player is, assuming you can’t already see the monstrous titan shooting a death ray out of his face. I can’t deny that there’s a real rush during this time, whether you’re the giant or not. You can call an unspoken truce with others in order to take down the largest threat, or you can continue to fight it out with anyone and everyone on the map as you avoid the Omega’s searing energy beam.

I keep using that phrase, don’t I? “The map.” That is quite simply because there is only the one map in Atomega, right now. Despite the fun contained within that map, it really cannot be ignored that one map just isn’t enough. Can you imagine if Overwatch had released with a single map, or Call of Duty? Now, I realise that their budgets differ wildly, but there simply isn’t an excuse for this lack of content. That isn’t to say that it isn’t still fun. Far from it, in fact. But until Ubisoft Reflections delivers on its promise to bring in more content, it means that Atomega currently has little longevity. It sure is pretty, though. It has a visual style that takes Grow Home’s cute, blocky characters and drops them in a Tron-like environment. Everything looks like it’s made of coloured light, including the customisable player avatars. Their various forms are all made up of coloured blocks, intermingling to create the animated frames of animals in their various states of evolution. Everything has personality, including the map that is easy to navigate and provides plenty of advantageous positions that can be used for both offensive and defensive strategies.

As I said at the beginning of this review, it’s nice to see a PvP shooter that offers something different to the usual death-dealing. Although you’ll inevitably end up fighting for survival at one point or another, the ability to cheat death by teleporting away constantly keeps things moving. Even when you do die, there’s no waiting for a respawn, your ball of light will simply re-emerge from your shattered blocks and you’ll begin the collection process again. This pace ensures that Atomega remains fun, but you’ll find yourself lamenting the lack of maps pretty quickly.

Atomega’s concept is great, especially in a world of identikit PvP shooters, but its dearth of content means it simply doesn’t last.