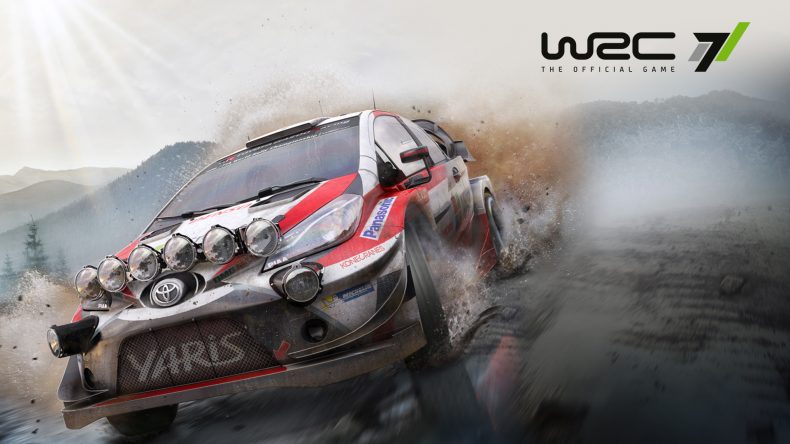 In the process of reviewing this game, alongside two other driving games, it struck me how varied the racing genre really is. In the space of a week I have driven touring cars around Donington and the Algarve, Le Mans cars around Laguna Seca in the pouring rain, and done the whole ‘only turning left’ bit in NASCAR trucks; and now I’m tossing an overpowered Ford Fiesta around the dusty country roads of Poland, in WRC 7.

I enjoyed last year’s game, but what I noticed quite early on with Kylotonn’s latest go at the WRC licence, was how similar it is to the game I played this time in 2016. The menu design and general presentation is almost identical, and the same issues crept into my time with this game. The daredevil crowds that notoriously swarm the most dangerous areas of real WRC stages are just as inanimate here as they were in WRC 6, and the way the game penalises off-track excursions is still wildly unfair and inconsistent. Leaving the track will sometimes immediately reset your car, giving you a nine second penalty, regardless of how far off you went. It’s strange to see how little has changed there, but it is nice to see other improvements to the visual presentation and tweaks to the handling that make it at once more realistic and more exciting. The game once again starts out with a driving test of sorts, throwing you in at the deep end in order to gauge how you drive a rally car. It doesn’t exactly cater to anyone without at least a little rally knowledge, but as your co-driver describes the road ahead and its dangers, the handy coloured icons overhead will help you to understand the difficulty of each incoming curve. Once this driving test is complete you’ll be recommended a setup to suit your driving style, but let’s say you made some mistakes along the way and you know where you went wrong, you can change the recommended settings appropriately.

The driving is where WRC 7 really shines, with a handling model that feels like it has been given an extra coat of realism and speed. Driving at high speed now really does feel as scary as it should; the trees whizzing by in a stomach-churning blur, your breath catching when the co-driver says “don’t cut” before a corner and your front bumper grazes a boulder on the inside of the corner – or you cock it up completely and are sent spinning off into the trees, pieces of your poor little car flying off in all directions. This is amplified by the more extreme feel of each driving surface, with loose surfaces like gravel really causing that realistic extra loss of grip as you slide ever closer to that corner’s outer barrier, your arsehole clenching so hard that if you put coal up there, you’d shit out diamonds. Unpleasant images aside, there’s nothing that causes this feeling more than the treacherous snow of Sweden’s terrifying stages. “Caution, slippy; hard brake into acute hairpin” is a phrase that you’ll come to fear as much as that big guy in Outlast, and you cannot help but find your whole body tensing up during the flatout sections. You almost breathe a sigh of relief when a tight corner approaches and you can slow down a bit. You know what surprised me about this, though? It’s bloody exciting. Even Dirt 4 didn’t elicit such heightened levels of adrenaline, despite being the better overall experience.

Not that the experience here is lacking, but again it hasn’t really moved on from last year. There is still a decent number of modes for you to get stuck into; like the timed challenges and multiplayer for online bragging rights, as well as a variety of custom stages and championships for the solo player, but obviously the meat of the game is in its career mode. I hate to say it, but yet again it’s just like WRC 6. You start with a junior team, choosing from three offers whose differences basically boil down to whether you want to drive carefully, recklessly, or somewhere in between; with your team’s happiness and work ethic depending on how closely you stick to that agreed driving style. From there, you’ll do your best to perform well in rallies and reach objectives set out by the team boss, which start out quite relaxed so that you’re not simply expected to win every event. At the end of the season (or your current contract) you might find yourself offered a seat in a WRC 2 car, with the ultimate goal being to do well enough to earn a full WRC drive and an eventual world championship win. With this being the official game of the World Rally Championship, you’d be right in thinking that the official teams and rallies are represented in WRC 7. With an impressive amount of detail, no less. Each car is meticulously recreated inside and out, with each surface dirtying them up nicely. Gravel and dust will cloud over the paint, mud will splatter over the windows and up the wheel arches, and snow will stick in the tyre treads; perhaps not matching the visual quality of Project CARS 2’s Rallycross events, but it’s impressive nonetheless. The lighting is equally realistic, with sunset stages causing all kinds of distractions as you drive into the heavy rays, or your car’s spotlights punching a bright hole in the pitch blackness of night stages. This shows you the detail put into the textures around each rally stage, with even the brake lights highlighting the pockmarked snow and ice in an aura of red. It can be quite a looker at times. Of course, most of these details will only be visible when slowing down replays; no way you’re seeing that much detail when driving at 80mph through a forest.

With its improved visuals and realistic (but still quite accessible) handling, there’s no denying that WRC 7 is one of the best representations of rally driving out there. However, it’s pulled back slightly by a largely unchanged overall experience from last year’s game. In truth, not much needed to change (if it ain’t broke, yadda yadda yadda…) but it’s still disappointing to see some of the same flaws rearing their ugly heads. With those issues ironed out, WRC 7 could have beaten Codemasters at its own game, but hey, second place is still a damn good achievement.

Spectators are barely animated
Career is near identical to WRC 6

WRC 7 is undoubtedly 2017’s most exciting rally game, held back only by an overall experience that makes the same mistakes as its predecessor.