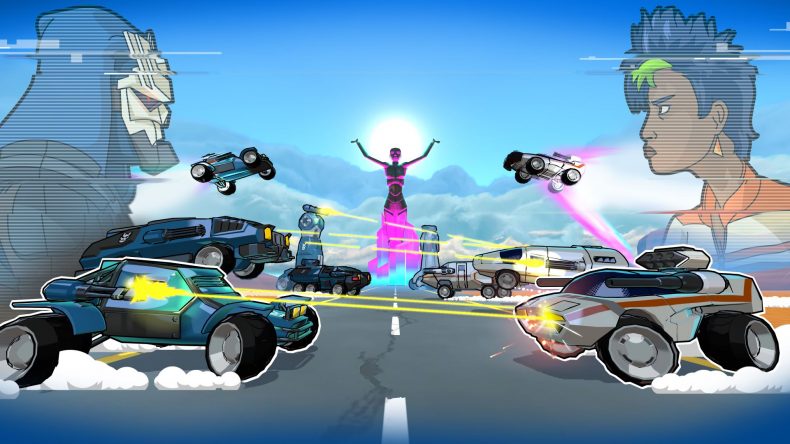 Online shooters are doing their best to emulate the success of Overwatch these days, aren’t they? Be it the ill-fated Battleborn or the recent Lawbreakers, that familiar brand of competitive shooting sure is popular. But they’re all just shooters, aren’t they? Well, that might be a bit unfair, but they don’t exactly break the mould; which is where Auto Age: Standoff comes into play.

Taking the PvP shooter idea, Phantom Compass adds a vehicular combat slant, much like the stuff seen in the PSOne days of Twisted Metal. Pitting small teams against one another, you’re encouraged to put together the right loadout to suit your play style. Pick from several machines, each with their own mix of speed and armour strength, then outfit them with a choice of primary guns and secondary weapons/abilities. This all sounds simple enough in theory, but you’re never really taught how to do any of this properly, so it takes a bit of trial and error to find the right loadout for you. None of the vehicles feel dramatically different though, so you won’t spend too much time here. As I said, the gameplay has a whiff of Twisted Metal about it, with the simple, responsive controls and focus on fast-paced combat. It actually feels a little like playing with radio-controlled cars, given how quick they change direction and how much they bounce around the maps, but that suits this kind of game quite well. This means that a gamepad isn’t entirely necessary for a change, although it was a bit more comfortable using my Xbox One controller, especially during lengthier sessions. Matches tend not to last too long though, and it works better that way. The pace is too quick for long, drawn-out campaigns.

Best played against other players, Auto Age: Standoff finds games quickly when needed, but only time will tell if players will stick around to keep servers busy. That depends entirely on how much post-release content Phantom Compass adds to the game, because its current list of just four maps simply isn’t enough. There are only a few game modes as well, with two of them being deathmatch variants, and they will grow tiresome in no time. You will find that aiming doesn’t exactly work during many of these deathmatches, as the targeting gets confused, especially when you get too close to your opponents. This can get a little frustrating when battling the AI, which rarely seems to miss. Star Wars’ Stormtroopers could learn a few things from Auto Age’s crackshot AI.

There is a small amount of single player content, but that is limited to a short, story-driven tutorial that, quite honestly, serves no purpose beyond teaching you the basics. The story of Val Vega and Dark Jaw, in a bleak, Mad Max-style future of four-wheeled combatants, is largely pointless. There’s nothing to rival the character of Blizzard’s PvP shooter here, but it does have an aesthetic that sets it apart from most games on the market: it is quite clearly influenced by cartoons from the Eighties. Hell, even the villainous Dark Jaw sounds like he belongs to Skeletor’s crew. This Eighties aesthetic extends to the art design, with a clean, cel-shaded look. Vehicles look like they could have been lifted from the old Transformers cartoons, and the bright colours and recurring neon purple seen throughout any energy-based weapons or shields, will bring back fond memories of the halcyon days of Hasbro’s robots in disguise. Even the music has that cheesy sound of the decade of big hair and dodgy clothing, complete with a theme tune that is actually rather catchy. I mean, it’s no ‘The Touch’ by Stan Bush, but it’s fun nonetheless.

It’s a shame then, that Auto Age: Standoff doesn’t have the content to back up its rather enticing visual design. With a few more maps and another game mode or two, it would have been much easier to recommend. As it stands however, it’s a good game held back by an entirely average overall package.

Auto Age: Standoff wears its Eighties influences on its sleeve, but doesn’t add enough content to back it up. It does offer a decent distraction though, with a bit of fun vehicular combat that harks back to the days of Vigilante 8 and Twisted Metal’s PSOne days.