Batman: The Enemy Within – A Telltale Series – Episode One: The Enigma 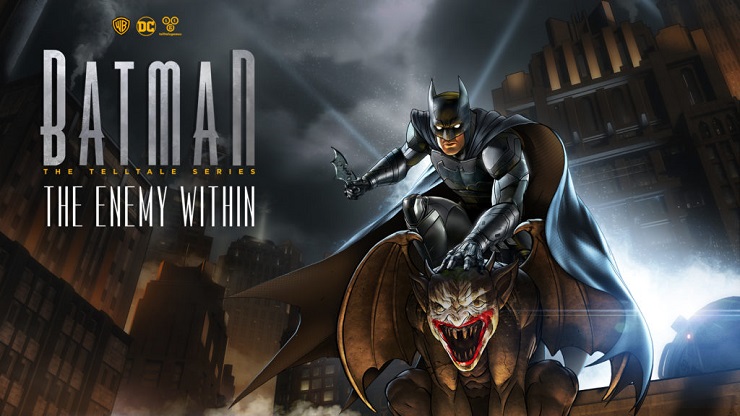 It’s become a typical reaction to dismiss Telltale Games at the moment. Not because they make bad games, but because there’re too many of them. When things aren’t being mixed up, and formulas aren’t being changed, it feels like another story pasted on top of another. Last season’s Batman wasn’t as good as I hoped for, but it did try and make some changes to the way you play. My main problem with it was it’s story; I’ve been a huge Batman fan my whole life, and that means I’ve seen many different takes on the villains of Arkham. From Arkham to Blackgate, there have been tons of iterations of Joker, Penguin, and everyone in between that I didn’t see how a couple more would light up the Gotham sky brighter than the Bat Symbol. It disappointed me, and although there were some great ideas, namely the Vicki Vale heel turn and the Children of Arkham, it still fell far shorter than what I’d hoped for.

When they announced Season Two, I wasn’t that interested, and even though The Riddler was set to be in it, my time with Telltale was wearing thin. Nonetheless, I played it anyway, and I’m so damn glad I did. Holy shark repellent, Batman! This is everything I wanted it to be and more. The Enigma not only tells a great story, it incorporates some fantastic dialogue and even better gameplay. You finally feel like Batman – like Bruce Wayne, and the thrill ride doesn’t stop from the second you start until the credits roll. We see a fresh take on Edward Nygma, the introduction of Amanda Waller, and the return of John Doe aka The Clown Prince of Crime (before any clowning). The basic premise of Episode One sees Batman trying to foil the plans of The Riddler. It’s been a long time since Edward has been in Gotham, and things have changed. Bruce isn’t aware of the destruction Mr Nigma did the last time he was there; in a nice turn of events, he was prominent in the days of Thomas Wayne, Bruce’s father. This time around, The Riddler is a psychotic quiz master who’d probably put Jigsaw from the Saw franchise to shame. My God, he’s sadistic. It’s a side of his character I’ve never really seen before, and I found it fascinating. He’s normally pulling the strings on camera, well away from the streets of Gotham, and would rather punish those he deems unworthy from the comfort of his own home, or base of operations. There is blood, and plenty of it. We’ve not seen anyone this sadistic, yet, and having the Riddler be so violent and creative makes perfect sense.

Telltale Games has an upper hand when drinking from the pool of DC because there’s no huge comic book canon to look to, and they’re creating a completely new adventure without treading on anyone’s toes. They’ve been ruthless here, and violence and death are becoming common. People die, and it’s savage. I love the way they’ve turned Thomas Wayne into somewhat of a criminal, thus giving many citizens of Gotham clear reservations about Bruce’s standpoint as the wealthiest man in the city, and whether they can trust him or not. In The Enigma, they do something rather shocking, and it could change everything. The introduction of Tiffany Fox (Lucius’ daughter) is a smart move, as it seems likely she may play an important role in Season Two, and maybe even don the cowl of Batgirl like in Future’s End story arc from the comics, along with Amanda Waller. She’s responsible for the Suicide Squad, so it’ll be very exciting to see if there’s a hint of their appearance later down the line.

Controlling both Batman and Bruce feels very natural, and the combat feels wonderful. There are times when you can also choose how to attack someone; two options will pop up with certain moves, and by pressing Q or E, a different attack will be launched. It’s a nice idea, and it also adds to the freedom and choice you have in battle; Soccer Kick or Anchor Punch, Round House or Body Slam – you decide. The links are back as well, but they feel more important this time round. Also, they’re pretty easy to solve – something that felt laborious in Season One. If you can remember back in the previous season, Bruce got thrown into Arkham Asylum, and in there he met a rather pale chap known as John Doe. Of course, he’ll be the foundation for what The Joker will be built on, but it’s interesting seeing just how he’ll be playing a role in this season. You have some choices to make regarding him, and from how the game ends, they seem much more important than I had originally thought when I made them. He’s kind of loveable, a bit simple – a shell of the evil clown we all know and love, but most of all he’s in awe of Bruce. He seems to think a lot of him, and some of the decisions you make play quite a role in his development as a serial killer.

There’s a great balance of puzzles, investigations, combat, and story progression. I wasn’t bored for a second playing Episode One of The Enemy Within, and I’m really happy about the direction they’ve gone in. Telltale Games make fantastic adventures, but it’s been a while since I’ve been blown away by them. This is just what the series needed if it’s to be successful, and after an exciting reveal at the end, I can’t wait to see what happens next.

Great bunch of characters
The explosion!
John Doe's inclusion
The Riddler is amazing

I was really impressed with the first episode, and it feels like things are only just starting to warm up.

You may also like
batman: the enemy withinTelltale Games