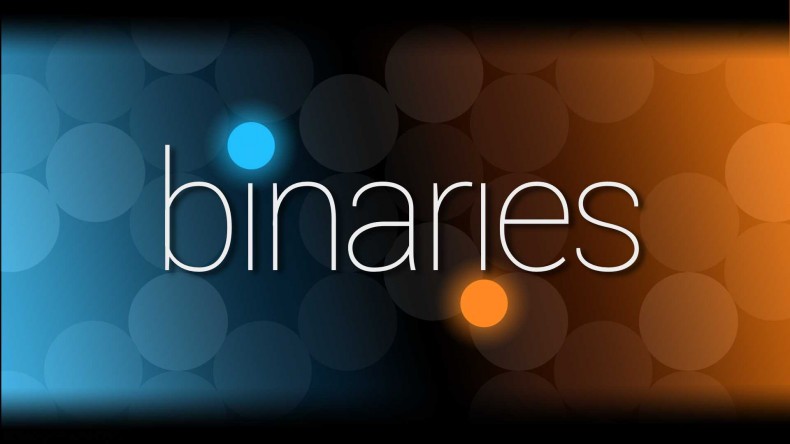 Super Meat Boy… Chances are you either loved it or hated it. Or loved to hate it, more likely. It was a fantastic game of soul-destroying difficulty, and an inducer of world-ending rage. Developer Tony Gowland (of Ant Workshop) was apparently frustrated by his inability to finish games like Super Meat Boy, and so he decided to make a game of his own, which he could actually complete. As a result, Binaries came into being.

In Binaries, you control two separate balls at once (hey, stop giggling, I’m being serious here) using the Dualshock 4’s left stick, and the aim is to get the blue ball to the blue finish point and the orange one to, you guessed it, the orange finish point. It all sounds very simple, but when spikes and turrets come into play, along with finish points on opposite sides of the map, things get fiendishly difficult.

There is a certain amount of charm and humour to the game though, which aims to ease the frustration somewhat. Snippets of text appear during some levels, making light of the perils awaiting you, though sometimes it distracts you and, because you giggled at that innocent line of text, you moved straight into a spike. This is a minor irritation though, as you’ll usually be hitting spikes anyway thanks to some brutal level design, and it will mostly be down to our species-wide inability to watch two entities at the same time. You see, that’s possibly the best and worst thing about Binaries. Controlling two characters at once may be interesting in theory, but in practice it can be just that little bit too difficult for our tiny human minds to comprehend. But that’s where the level design comes into play, and for the most part, it deals with the potential difficulty very well. Of course, some levels are just going to be too tough for some players, but the game opts for a honeycomb structure in its level menu, opening several surrounding levels for each one you complete. It doesn’t lock progression behind completion grades either, meaning that you’ll often have at least two or three levels open at a time, possibly more. This, however, does not stop you from becoming totally stuck and unable to progress, as some of the levels can be ridiculously cruel, requiring some godlike patience as you die again and again, just trying to find your way through to the end.

Luckily, levels aren’t linear. Some will be an obvious ‘straight line’ but others can be done through trapping one ball somewhere in order to freely move the other to another point on the map, you will ultimately find your own way through trial and error. The faster you get to the end, the better your grade will be, but only the most masochistic of players will obtain an S rank for every level. Hell, it requires a degree of self-flagellation in order to get an A or even a B rank in some levels, but as I mentioned earlier, your grade doesn’t determine whether you unlock new levels or not. Get a U rank for every level you play and you’ll still be able to progress, meaning that you can take all the time you need to discover the route through a particular level and you won’t be punished for it. Sound design plays a nice part in letting you know how you’re doing in a level, as the music ebbs and flows depending on your performance. The music cranks up a notch when you’re going the right way, subtly letting you know that you’re getting it right without you having to check for yourself. It’s a simple trick, and not exactly unique to this game, but it’s certainly appreciated when you’re already tasked with controlling two entities at once. The sound can also be quite harsh, emitting a shrill (and somehow condescending) buzz whenever you die.

Death is just a part of the process though, and the instant restarts mean there are no long loading times between failures, lessening the frustration you may otherwise have felt. In fact, there’s almost zero loading in the entirety of Binaries, letting you jump from menu to level and back again in the blink of an eye. Is that level too hard? Hit ‘Options’ and exit to the menu, select another to try and you’re in, no waiting necessary.

Recreating the challenge of Super Meat Boy, but adding an extra character into the mix, was always going to be a difficult ask, but Ant Workshop does a decent job of bringing it to life. Although it may put a lot players off early on, Binaries should be celebrated for trying something a little different, and still making it fun in spite of its infuriating difficulty.

Despite being a fun game, Binaries’ Super Meat Boy gameplay style doesn’t quite fit a puzzle game like this. Mainly due to our feeble human inability to monitor two characters at once.