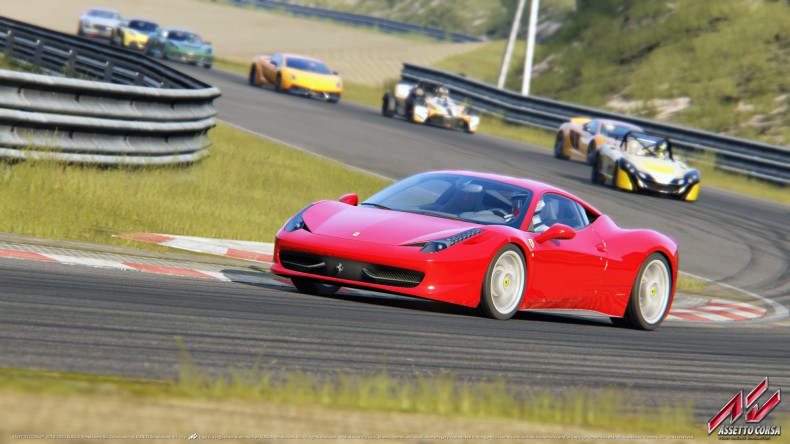 Damningly, Assetto Corsa – Italian for ‘Racing Setup’ – is at it’s best when there are no other cars on the track. Nothing but you, your car, and a winding ribbon of tarmac, there’s a special kind of joy to tackling each circuit, be it the forested inclines of Spa, the historic loops of Monza circa 1966, or the ever-challenging Nürburgring Nordschleife. Lap after lap, pushing yourself and your machine to the edge, every imperfection in the tarmac relayed to you by the excellent physics system; you can lose yourself in the joy of it.

And what a magnificent physics system it is. The way your car leans into corners, under-steering wide, the grip coming back you as you exit the corner, easing on the throttle to stick on the limit of the racing line, is as realistic as any I have seen. As a pure sim, the options for tyre pressures, gear ratios, and dampers are manifold, allowing you to tweak everything in your pursuit of the fastest lap time – although each track has a specific setup pre-loaded for you if tinkering under the hood isn’t your thing. If you’re into hardcore sims, it doesn’t get any better. Literally.

Lets start with the archaic AI. Glued to the racing line, they are almost completely oblivious to you, leaving you no space when overtaking, and dumbly ramming you from behind should you get in their way. This isn’t the overly aggressive AI of Project CARS or F1 2016, this is just plain stupidity, and it means racing against them is more of a chore than anything else. This pales in comparison to the career mode, if this collection of loosely grouped races merits the title. With exciting names like Novice Series 3 and GT Advanced Series, you can imagine what you’re in for: laps of the shorter tracks in Fiat 500s, moving onto BMWs etc. Medals are awarded for the top three places, and progressing onto the next set of races means earning a predefined number of these. Later events fare better, all Ferrari offerings, GT3-class only and the like, but the slog (and it really is a slog) to get there just isn’t worth it.

With no points for anything less than 3rd, after a lap or two you’ll know when a race is a lost cause, simply restarting rather than finishing one. Combined with an AI that frequently runs you off the road and penalties that demand you slow down – read: take your foot off of the accelerator – for 10 seconds for the slightest corner cutting, and you’ll find Assetto Corsa more frustrating than fun.

A lack of any sort of continuity in the career is just another nail in the coffin. I’ve complained before about racers shoehorning in a limp-wristed story, but Assetto Corsa goes the other way entirely; a paragraph of text in the menus explaining how you’ve borrowed a mate’s BMW and how you want to show him how you drive. There is none of the ownership that drives Gran Turismo, no sense that you’re really progressing up the racing ranks as in Project CARS. Naturally there’s the usual raft of time trials, quick races, and race weekends as you would expect, as well as special events that give you a set car and track and challenge you to beat a certain time or a certain amount of points. The dip and dive nature of these, along with your pick of a lovely selection of cars, can be enjoyable, AI aside. The showpiece Ferrari ‘La Ferrari’ sits alongside classic F1 cars, road cars and everything in between, although the inclusion in the car menus of DLC before the game is even out rankles just a little.

The range of tracks is similarly broad, with the ex-Dutch F1 track of Zandvoort, Brands Hatch and the Barcelona GP track making appearances alongside a swath of Italian circuits. Only 12 locations are on offer, but, with the various layouts, the total tracklist comes to 29, and most are distinct enough to merit their inclusion multiple times. Sadly, none of the tracks look particularly great, feeling flat and featureless compared to many of Assetto’s brethren racers, and while the cars are fairly good looking, it’s no better than games that came out a year ago, and, with no weather effects or night racing – standards in a racing game by now, surely? – most of the action takes place in harsh, unforgiving daylight. Bafflingly, despite being big on the PC racing sim scene, there are no options in game to adjust the sensitivity of a racing wheel you attach, with the tiniest movements on my Thrustmaster wheel translating into wild wrenches – although the sensitivity of thumbsticks on a pad can be adjusted. For a racing sim, this is almost a cardinal sin, and is endemic of the lack of polish that surrounds the game, with clunky menus and races that see you magically teleport to the pits upon crossing the finish line.

Rough edges are understandable, of course. Developer Kunos Simulazioni is a small Italian studio with 30 employees, unable to devote the same kind of resources to a game as its competition. The PC version of Assetto Corsa, released in 2014, provided a solid foundation of an army of modders to improve the rest of the game. Console players are not so lucky, and, with so many other racing titles on the market, it’s impossible to recommend a game that is just so average.