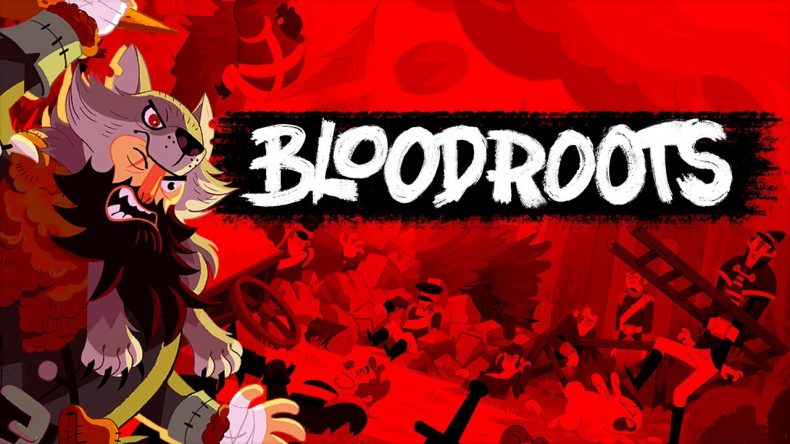 Hotline Miami was an uber violent top-down shooter that was relentlessly difficult and addictive. You died a lot, but you learned from every death. The more you died, the more you became familiar with enemy movements, and patterns started to form for how you killed the mobsters around you. Bloodroots is very similar with how it approaches gameplay, filled with that sadomasochistic touch Dennaton did so well.

Set in the Wild West, you play as Mr. Wolf, left for dead and brought back to life to exact revenge against those who did him wrong. What separates Bloodroots from games like Hotline Miami is the variety in weapons that can be used to kill enemies. Axes, swords, and bows can all be used, but there’re also plenty of ridiculous items you can use. Plastic flamingos, cabbages, tables, and bails of hay are all valid tools of destruction, plus a load more that allow you to create interesting ways to kill your enemies.

What’s even better is certain weapons can also be used to get around the environment. Not only can they beat the shit out of a bad guy, but they can also launch you into the air or act as a pole vault. For example, giant oars will spring you into the air, swords can be used to make you dash, and harpoon guns will kill an enemy and pull you towards them. There’re plenty of combinations you can put together that not only help you get around, but also slaughter enemies, and it’s up to you how you do this. The freedom to play how you want is liberating, but that doesn’t mean it can’t be incredibly tricky. You’ll end up dying a lot, but if you’re willing to put the time in, the satisfaction of clearing an area whilst speeding around throwing corpses or carrots is exhilarating. Bloodroots is a creative culmination of choreography and chaos, and you’ll get lured in by how addictive the flow of it is.

Bloodroots is really pretty. The level design is excellent, providing lots of different areas with moveable platforms, spike traps, and more, never being used too frequently to become repetitive. The various enemies have different attack patterns, using a range of weapons to try and kill you. Some run at you brandishing their swords, gunman stand on top of hills and mountains shooting at you, whilst others sit in ballistas firing huge boulders at you. Once you’re hit, you’re dead, but the non-existent load times between deaths make it almost impossible not to continue playing.

The art style makes your playthrough a delight because there’re lots of areas filled with great detail that bring Paper Cut’s vision of the Wild West to life. The music is also great, and much like Hotline Miami, it helps to motivate you the more you play. The gameplay and presentation go hand in hand to make Bloodroots a worthwhile experience. Whilst there’re plenty of times you don’t want to stop playing, some areas are massively frustrating. There is one area filled with spikes that covered the ground except in small spots where the enemies were standing. You have to jump on barrels to get through the spikes, but one false touch of the left stick would thrust you into the spikes once the barrel broke. You have to clear every area before moving to the next one, and it took me ages to do it. These moments ruin the flow of Bloodroots because they can be difficult to get past.

Another issue I had was whilst playing in docked, was the fast action would mean enemies hiding in plain sight are coming at you seemingly from out of nowhere. It’s much easier to see in handheld, but when you only get one shot before you have to restart an area, it’s a real pain when you get charged at and stabbed.

Bloodroots is a fast-paced action game that offers plenty of variety to kill your foes, even if it can be tough at times. The level design is fantastic, as is the art style and score, but it’s a shame that some areas are overly difficult and unnecessary. Still, you can do far worse than Bloodroots, and if you love the relentless gameplay of Hotline Miami, this is definitely one to try.

Bloodroots offers a satisfying gameplay loop, and the variety of weapons often make up for the overly difficult areas.