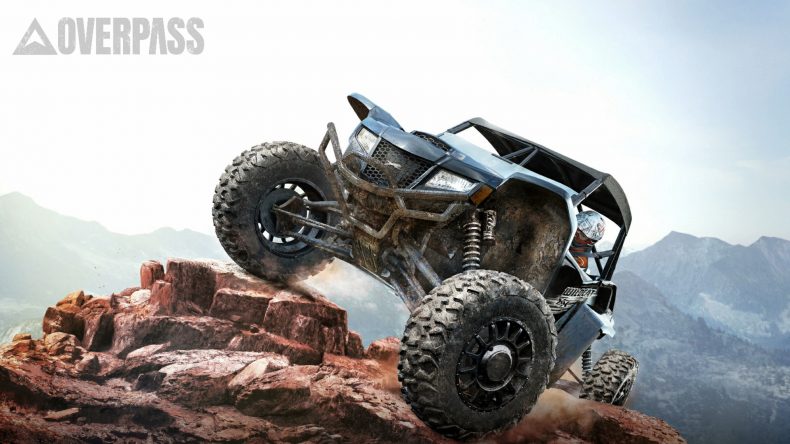 I’m going to show my age here, but I used to love the TV show Kick Start as a kid. It had trials riders racing against the clock on their dirt bikes, navigating seemingly impossible angles and obstacles with incredible bike control. There was even a kid’s version, with young riders doing stunts that would make today’s Health and Safety folks lose their minds. Overpass reminds me of Kick Start, only with buggies and quad bikes.

At its core, Overpass is like a fully 3D Trials HD, mixed with a bit of MudRunner for good measure. The aim is to reach the end of each course with the fastest time, preferably without rolling your buggy or throwing your poor rider from their quad bike. Each course is made up of extreme off-road terrain, with steep inclines and deep, muddy trenches that will test your throttle management. They’re also filled with obstacles, from natural rock formations to man-made see-saws and other, more treacherous tests of your vehicle’s suspension and ability to remain upright. My biggest issue with Overpass, and I’m sorry to begin on a negative note, comes right at the beginning of the game: the tutorial. Overpass is a unique game, requiring the learning of new skills or simply a retraining of the brain, as you’re tasked with navigating such harsh terrain. I thought back to my time with MudRunner, in which its tutorial taught me how to use differential settings to get through deep mud and up steep inclines with minimal loss of traction, especially when coupled with careful use of the throttle. Overpass doesn’t do this, instead offering a few throwaway lines of dialogue that barely gives away anything. In fact, the tutorial even lets you skip the uphill climb section if you get stuck. This is a huge problem, as it will literally skip over a key part of the gameplay, effectively leaving the player unable to deal with a good fifty percent of the game. This can mean you’re actually unable to progress in career mode.

I think that’s what makes it so frustrating and disappointing, knowing that Overpass is a game that could be incredible. When you do find a rhythm in a course, or you click with a particular vehicle, it can be a huge amount of fun to play. I loved the obstacle courses, trying to find the most efficient way over a series of concrete pipes that lay across an uphill path, or trying to drive over a pile of used tyres without tipping over as you bounce around. It brought out my inner Kick Start fan.

The physics do sometimes go against you, however. Considering the weight of the machines being used, it’s amazing how light they seem to be. They twitch and bounce at the slightest change in steering or terrain, sometimes resulting in a rolled vehicle. This would be fine if it felt like it was ever in your control to prevent it, but half the time it just didn’t. When your UTV suddenly bounces at an awkward angle, with no warning or reason, it can ruin a run. It’s worse on an ATV too, as you often have no chance to recover from a slight tip, as even leaning your rider has no effect. They’ll usually just leap from the saddle inexplicably, again possibly destroying a run. Normally, I can accept that I’ve simply done something wrong and I need to try a different tactic, but in Overpass it happened again and again, no matter the route I tried. This problem is exacerbated by the game simply not giving you the tools to deal with its uphill climb courses. The only information given in the tutorial is to change to a locked differential and to aim for non-muddy areas of the hillside, which might sound fine, but what about when the entire hillside is made of mud? What about when your vehicle becomes entirely stuck, halfway up the slope? No amount of throttle and differential management changes this predicament. There were times where I would think, “I need to reverse out of this and try again,” only for that reversal to result in my UTV turning on the spot, sending me rolling sideways down the hill. I didn’t turn the wheel, but it turned nonetheless. I just couldn’t win. In a game that needs precise movement and full control, it’s amazing how often Overpass just doesn’t offer either.

The way its career works is more accessible than most, at least. You’re presented with a spider’s web of options, with each completed event unlocking the next offshoot (or offshoots) in the web and so on, and so on. Finishing an event in the top three will unlock new items, vehicles and upgrades. These bonuses won’t unlock if you finish fourth, but the next event will still be available, so if you manage not to become stuck helplessly in a course (it’s entirely possible for that to happen, unfortunately) then you can still progress to the next set of events. It’s such a shame that this accessibility is so at odds with the actual gameplay.

It’s quite a looker, though. Played on a PS4 Pro, there’s no HDR but the lighting is still impressive. The setting sun’s rays pouring through the trees is a gorgeous sight, as is seeing your tracks cut through the mud (they remain visible on successive laps, too). That said, it has some very noticeable framerate issues in places. I often saw frames skipping as I drove along, as well as stuttering and slowdown, especially when see-saws tip over, exploding particles of dirt into the air.

Overpass had the potential to be a great game. It could have been the next Trials, but every good part of the game comes with a caveat. And honestly, half the time I just didn’t enjoy myself. Its tutorial doesn’t explain some of the most basic things that are integral to progressing in career mode, sometimes leaving you floundering on a muddy slope with no way to move on. It’s difficult to overlook such a large flaw, especially when the repercussions ripple throughout the rest of the game. It makes Overpass difficult to recommend to anyone other than the most hardcore fans of the trials offroad sport. If you were just a fan of Kick Start like me, you won’t find any nostalgic joy here.

Overpass is an interesting and unique take on the driving genre, but issues in the most integral areas of the game often make it a chore to play.