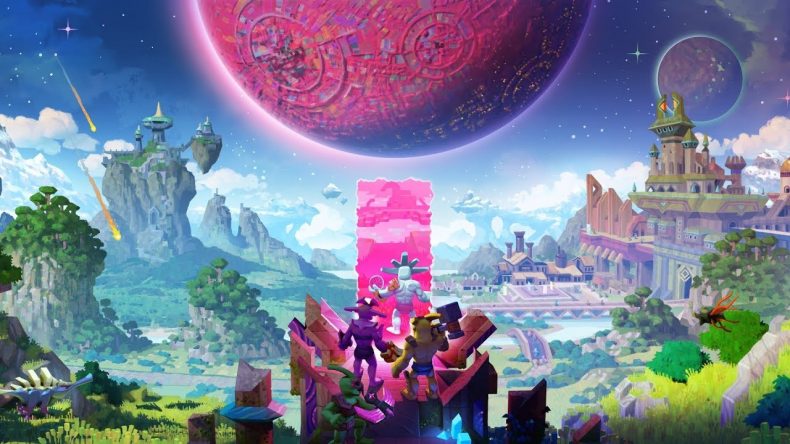 Boundless is an experience that feels like it is a game that is a couple of years too late. Another voxel based sandbox game with a heavy emphasis on crafting and exploration being released into a heavily saturated genre that is still, without question, dominated by Minecraft. Minecraft is so successful because at it’s very essence it is simple, but Boundless thrusts you into an overly fussy world compounded by layers upon layers of MMO style stuff to do. There is some charm there, but it is buried under unintuitive menus and a complete lack of support information.

You begin in a character creation screen that on the surface offers you myriad options for your character, however closer inspection shows that these options are all just gradients of the one you have just dismissed. Once you are happy with your avatar you will spawn in the Sanctum and equipped with your totem can choose a spawn point by gazing above you and selecting a planet to warp to. Once on your new world you are prompted to start gathering materials by hitting things with your totem. The process then is gathering enough to craft a better tool for the job, be that an axe for trees and foliage, or a shovel for dirt and sand and a hammer for gathering the various stone types. If you have played any type of sandbox survival game you will understand pretty quickly that once your basic tools are crafted and you have made a couple of crafting stations for more complex recipes your next order of business is to set up a base. As an MMO game you will need to plot out a patch that no-one else inhabiting the world can then build upon. You do this by crafting a beacon and then setting out a plot. Initially your buildable space is pretty limited, but as you progress you can craft more plots to increase the area you construct upon.

Everything you do in the world will grant you XP that you can then spend on skills. Early skills are focused on things like improving your overall health or your harvesting speed with certain tools. Later skills involve bomb making, the ability to warp to other worlds and lowering your tax on items you sell on the marketplace called the Exchange.
There are various objectives to work towards that you can do in your own time. Completing them grants you item boxes that you can open. The boxes mainly seem to contain XP as well as in game currency that you can spend on cosmetic items or purchasing more boxes. In the early stages the loot drop feels pretty regular, so much so that there is no real incentive to spend your credits on anything, however it will be interesting to see how this pans out after a much more extended play when levelling begins to take much longer. Crafting is fairly simple, you can use different crafting stations to do different things. Each item you make has a time associated to it, so for example if you require a new axe for chopping down trees you will need to allow for the amount of time it takes to make it. Basic items take much less time than more complex items and I am fairly sure there is a process to speed up the crafting, however the menus aren’t particularly intuitive and I can’t work out how to do it. Recipes too are convoluted. Early on you are tasked with creating a furnace. The furnace requires two components to work and, of course, fuel. Wood works, but it slows down the process of smelting, far better to use something like coal or a peaty soil – so far so good. The next problem is finding stuff to put in the furnace. I wanted to make glass, so I hoped that putting sand into the furnace would give me it like it does in Minecraft – it doesn’t. Instead you need a combination of sand and silty soil, something I only discovered by consulting the player created wiki on my phone.

I don’t have an issue per se with a game that has complicated systems that require a wiki to be open, Terraria is a good example of a game I have consulted external sources for to understand how things work, and in the early days of Minecraft on PC I had one open in the background constantly, however when playing on a console it isn’t the easiest of things to be able to consult one. Far better to have an in game encyclopedia that can be interrogated rather than relying on a third party to explain how the game works. A simple “What is this?” function would do a lot to remove some of the early frustrations with the game. Visually the game is quite pleasant. I have spawned on a fertile planet with hills and trees and lots of greenery. At night time the other worlds are reflected in the glass like water and it can be quite pretty, but in the day time the water just looks like it has rendered the blocks which gives an odd sensation whenever you are near it. Rather than simple cube shapes the world builds with tetrahedrons creating a softer texture than most voxel based games and the vegetation grows in erratic ways, just like in real nature. Draw distance is a bit of an issue though with texture pop in and a loss of integrity the further you look to the horizon. Perhaps the greatest strength of Boundless is the ability to craft warp points to other planets. You will need to complete some objectives and learn a little more about how they work, but portals are a great way of expanding the scope of your game as each world will be a little different with biomes you haven’t seen before or fauna that behave more aggressively.

There is something about Boundless, the sense of scale that the portals to other worlds offer is mind-boggling and there is a deep crafting system to keep builders and explorers alike focused. It just all feels a bit like you’ve done it before. The journal activities give you a sense of direction, but the crafting recipes are obtuse and the menus and systems are poorly implemented to a point where you just want to return to the simplicity and familiarity ofsomething else.

Boundless is a game heavy on exploration and crafting. The existence of craft able portals to
other worlds extends the scope considerably, but obtuse recipes and unintuitive menus dampen
the enthusiasm somewhat.