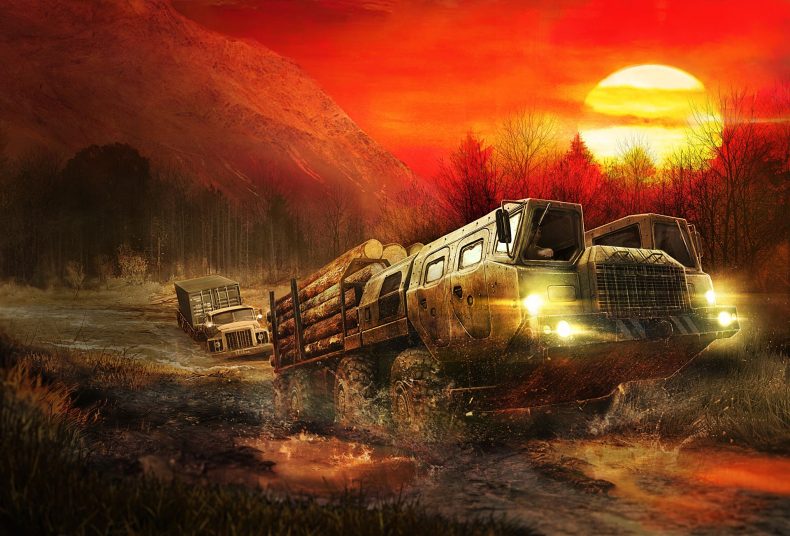 Just under a year ago, when I reviewed the original Spintires: Mudrunner game, I wrote: “With its pedestrian pace and delivery objectives, Mudrunner won’t appeal to an awful lot of people, but that doesn’t stop it being a fun and often relaxing experience.” In this new American Wilds expansion, not a lot has changed from the above, but I must say that it is still well worth your attention.

Spintires: Mudrunner – American Wilds (don’t you just hate multiple subtitles in a game’s name?) adds a couple of new maps to the sandbox single player mode, each with their own overall objectives and particular set of challenges to overcome in its environment. Alongside that is a handful of new challenge missions, which show off some of the new vehicles and just add a bit more personality to the package. The problem I had with the DLC is just how much of it is locked at the start. Mudrunner was plagued by this issue of an almost arcade system of unlocking new vehicles and maps, and American Wilds does not address this problem. Only one of the two new maps is unlocked and the vehicles are also locked behind the game’s Progression Point currency, and the game doesn’t really tell you how to earn these points in order to open up the content for which you have paid. Luckily I had played the game previously and knew that completing all the objectives on a map would earn some points, leading to an easier time of unlocking map two.

Challenges are obviously locked (except the first one, of course) because you’re expected to move through each one in sequence, though if this is your first time playing Mudrunner then you’ll want to complete the tutorial and the original challenges to learn the ropes before diving into the new DLC challenges. In fact, the game even suggests this, if you try selecting the new stuff first. You’re free to ignore this advice if you’re a returning player, thankfully.

But what is Mudrunner? It’s essentially a delivery game with offroad elements and a sandbox style, but there is actually a lot more to it than that. Each of the sandbox maps has watchpoints to discover, that will uncover sections of the map so that you can better plan your delivery routes. I enjoyed driving a little 4×4 out into the wilderness before taking on any deliveries, allowing me to get a feel for which roads are less treacherous and where the dirt roads might work for shortcuts. You can also discover other vehicles along the way, unlocking them for use later, as you can switch between vehicles you have unlocked, on the map screen. It’s an odd thing for a simulator like this, but you might be thankful for it when you get a vehicle stuck or damaged and need a repair or an alternative delivery vehicle. When you do get into a truck and decide to take on a delivery, that’s when things become a lot more challenging and strategic. Your best bet is finding a truck that is suited to offroading, but it isn’t impossible to take a standard rig over the dirt roads, you’ll just require a lot more patience and some liberal use of the winch where possible. This is because, as the title suggests, Mudrunner – American Wilds has you driving through some rather untamed areas filled with muddy tracks that have the potential to see you grind your way into an immovable spot or even tip over and ruin everything you’ve worked for in your trip.

This may sound stressful and I suppose it can be, but the lack of time limits really does allow you to just take your time and enjoy the driving. Enjoy the scenery too, as even with some rough edges like some basic trees and a strange fog effect that can overpower the lighting at times, it still conveys that look and feel of being out in the countryside. Only, you know, churning up nature in massive trucks. You can’t help but be impressed by the way your tyres grind into the mud and push it around, leaving real grooves that remain throughout the entirety of your stay. Thick gobs of wet earth will stick on your tyres and cause traction issues, even once you’re back on asphalt roads, so you will have to take care until your wheels have freed themselves of the extras weight. The water effects are incredible too, as it sprays and pours from your wheels as you fight your way through deep puddles and over shallow areas of rivers and swamplands. Thankfully, although the camera can still be awkward and clumsy, it seems to have been slightly improved to the point that you can actually see what you’re doing when driving in third person view. If you want a true simulation experience, you can jump into the cockpit view and you can even use a manual gearbox, which you can switch to whenever you want. Indeed, it’s sometimes essential when navigating through particularly deep mud or up steep slopes. The handling is mostly fine, but it can be a bit clunky until you get used to it. It’s a little too easy to turn too hard, but it’s actually more realistic than you might think due to the vehicles you are driving and the terrain you are on.

When everything clicks and you find yourself driving through the night to make that last delivery, Spintires: Mudrunner – American Wilds is remarkably fun and relaxing. In a world where games like Farming Simulator are finding their niche even in the console market, this deserves to find a decent audience. Fans of the original game will enjoy this American Wilds package, though it remains unlikely to bring in any new players, despite improvements to the core game.