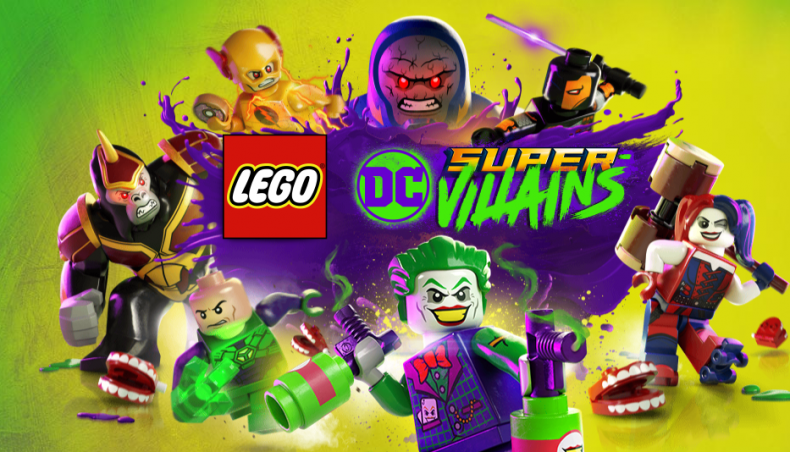 DC fans don’t know where they are up to, these days. The comics are doing well and the TV output is stronger than ever, but its movies are struggling. Where do the games fit in? Well, Injustice 2 was a stunning use of the DC characters, creating its own canon that is now officially recognised and both games spawned several comic arcs. The Arkham games were all successful, again creating their own take on the licence and characters, instead of merely adapting an existing story. This is where TT Games comes in, creating another of its LEGO games and going for a fourth bite of the DC apple.

After three games focusing on the Caped Crusader (and eventually the Justice League) it was decided that perhaps they should be sidelined this time, instead letting players see things from the perspective of the criminals of Gotham, Metropolis and beyond. Let’s face it, as much as we all love Batman, he’s long been due a rest from the spotlight. Or bat signal, in his case. LEGO DC Super-Villains begins with our fun loving criminals breaking out of prison, including a new arrival…you. Unlike the previous games, where custom characters were just a bonus aside, you really are the star of this particular show. You can make your character as cool or daft as you like, give them weapons and, most importantly, superpowers. You see, your mute “Rookie” isn’t a simple villain, they are quite literally a super-villain. The great thing is, as the game progresses and you unlock new characters, you also unlock new customisation options for your Rookie, allowing you to continually tweak and perfect your creation to suit how you want to play the game. It’s a simple addition, but one that genuinely changes how you play at times.

Anyway, breaking out of prison is made a little more difficult by the arrival of the Justice League. Strangely, a new set of suspiciously familiar-looking heroes calling themselves the Justice Syndicate, arrives to help round up the escapees. Headed by Ultra Man (no, not the Japanese TV show character), this new bunch of supers turn on the Justice League, teleporting our heroes off-world. Only Harley Quinn knows what really happened, and so it’s up to her and the rest of the DC Universe’s villains to save the day.

Saving the day consists of journeying across the DCU and smashing hundreds of pieces of LEGO, building and rebuilding sets that will open up new routes through each level. If you have played one of TT Games’ previous LEGO games, you’ll have no problem getting to grips with this latest outing. Nothing has really changed, you’ll still be looking to gather enough LEGO studs to earn “True Super-Villain” status, or going back in Free Play to find all the minikit canisters, or finding and defacing character posters in this particular adventure. You can still find and unlock red bricks to enable things like double studs and other things, as well as using various characters’ unique abilities to discover all the various secrets the game has to offer. As usual, there is a ridiculous amount of content on offer. The main story will take upwards of ten hours by itself, before you unlock secondary story missions or head back in free play to unlock everything you couldn’t reach before. On top of that, as has become custom in these games now, there is also an open world that can be explored at your leisure in between story levels. The open world in this case is both Gotham City and Metropolis, both with their own unique lighting (Gotham is eternally bathed in moonlight and pouring rain, while Metropolis remains sunny), including various outer areas to boot. It really is a huge game.

Sometimes that size can be a pain however, especially when it comes to the story levels themselves. Although they’re always fun and provide plenty of things to do and see, they tend to outstay their welcome a little too often, with some of them going on for around 45 minutes or more. It’s not exactly a huge problem, but there are times when a cutscene starts and you think it’s the outro for that mission, only for an entire new area to begin with new characters. It’s a little like the last hour of Return of the King, when the film keeps fading to black, only for the film to keep on going. You still enjoy what follows, but you’re also kinda wanting it to wrap things up. Thankfully, the story itself is great fun and there’s some exceptional writing and humour throughout. Fans of DC’s animated output over the years will be thrilled to hear the voice talents of Kevin Conroy, Mark Hamill, Tara Strong and Jennifer Hale, reprising their old roles from various DC animations. On top of that, we have the likes of Nolan North and Gina Torres voicing the Justice Syndicate, and even a few of the DCTV stars like Brandon Routh and John Barrowman lend their voices to their LEGO counterparts. There’s a real sense of quality here.

Between the writing, voice acting and the excellent visuals that are incredibly colourful and, as always, respectful of the LEGO licence, DC Super-Villains is a fantastic package. It doesn’t really do anything new to reinvigorate the gameplay, but its fun level design and inventive use of the licence combine to create something that everyone can enjoy, not just fans. It’s certainly worthy of sitting alongside the Arkham and Injustice series, as one of the best DC games out there.

The LEGO formula may be growing tired at this point, but LEGO DC Super-Villains is still one of the best games TT Games has produced and is an excellent use of the DC licence.