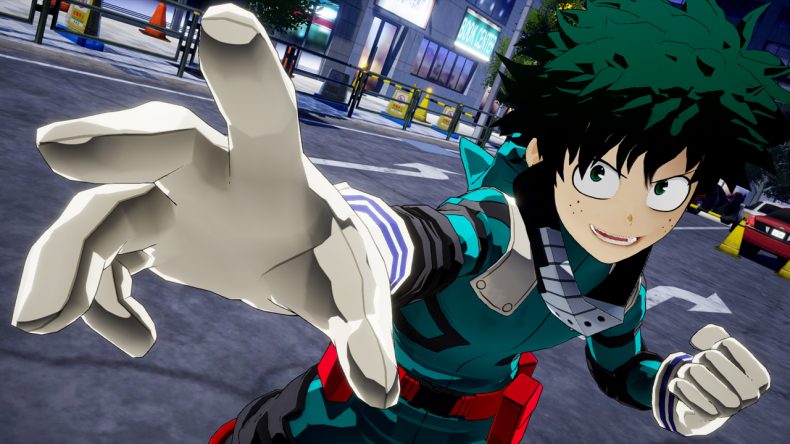 To say Bandai Namco have a high turnover of anime related material would be putting it lightly, after My Hero One’s Justice is released the company would have released their eleventh manga or anime related title in 2018. To have such a high output is surely good for the fans of the franchises that these games are based on, but considering that these games vary so wildly in terms of quality it seems that maintaining a constant stream may not be worthwhile.

My Hero One’s Justice is the first game tie-in for the My Hero Academia series, which centres around an alternate universe in which people can be born with physical abnormalities called ‘Quirks’. In fact in this universe quirks are so common that it’s almost unnatural for someone to be born without one. Step forward Isuzu Midoriya, one of the quirkless few but with a passion to protect people burning in his heart. Midoriya catches the eye of the most successful hero around All Might and is chosen to be his successor (All Might has a quirk that can be transferred), and as a result Midoriya attends the prestigious Super Hero Academy U.A. High. In most manga serialisations there’s normally a sports festival and the game picks up directly after this point where Midoriya interns with Gran Torino and concludes when All Might battles the villainous All for One. Unlike most of Bandai Namco’s anime tie-ins this is a one on one fighting game with the added bonus of players being able to choose up to two sidekicks. You have a regular attack, a jump button and two buttons to activate your character’s quirk, with one of them generating a different attack should you press a direction at the same time. Sidekicks can jump in to the fray should their usage gauge be filled and it wouldn’t be a Shōnen game if there wasn’t an over the top special move or two that guarantees a flashy finish to the fight should you time it right. It’s easy to get carried away with the feeling of being super powered as the characters jump and zip around slamming down haymaker punches and filling the air with destructive energy pulses all pulled off through simple button presses and directional inputs, it’s to ensure the game rewards the player with amazing visual feedback for little in the way of effort, and it works sublimely in that regard.

The arenas help with this massively, they’re fairly decent sized locations with tall walls and decent detail, not that you’d notice because they’re normally destroyed within seconds. My Hero One’s Justice does destructible arenas fairly well, nearly every punch, slam and even sound wave results in a pillar crumbling of floor shattering; at one point I managed to destroy a lamppost just by walking in to it, that’s how powerful the game wants you to feel.

The story mode is the game’s main hook putting you in scenarios from this section of the series like when Midoriya and Bakugo fight All Might as part of their training camp, or when Midoriya, Iida and Todoroki take on the ‘Hero Killer’. What’s truly good about this mode is that you’re constantly asked to use different characters, allowing you to experiment with different fighting styles and quirk types at least meaning that you’re not using only one character from the roster, and once you’ve battled All for One as All Might you’re then asked to play it all again, but this time from the villainous side of things. The story mode also doubles as a nice tutorial for the fighting basics, which is just as well because the training mode is kind of anaemic. You can view movesets, but there’s no option for training drills or specific enemy attack patterns, I mean, it had to be included, but it could have done with more work especially considering how much detail game’s like Blazblue, Street Fighter and Bandai Namco stablemate Dragonball FighterZ go in to.

As with beat ’em ups there’s the usual Arcade mode, vs battle, online battle and more commonly these days character customisation. Now, you’re not going to get a SoulCalibur VI level of editing here, but you can at least ensure you’re not stuck looking at a default outfit for the entire time. Everything you tackle in single player unlocks an outfit part or an accessory be it outright or through money earned which can be used to purchase additional customisation parts. You’ll unlock a load through the story mode, but you can get considerably more through the game’s Mission mode.

In Mission you’ll pick a line-up of three characters and will be tasked with battling your way across a board with degrees of varying challenges. If you’re not satisfied with how you did on a challenge you can redo it, but be warned your health does not refill after a fight and instead you need to gain health items through completing the challenges on the board. As a whole this doesn’t have the trials and tribulations of Midoriya et al to keep you hooked but it’s certainly a good diversion nevertheless.

Considering there’s an exceptionally large character roster in My Hero Academia it’s amazing how Byking have kept the character selection so restrained; there’s no Endeavour, Midnight, Snipe or Shoji to choose from and from a teacher standpoint Present Mic is included but only as a narrator for how modes work. I guess we should be thankful we don’t have the series’ resident perv Mineta as a playable character but it does seem that some people will be unhappy at some of the omissions, well, at least Froppy is in, so that’s good. One’s Justice does look pretty good on Switch, although considerably better in handheld mode due to not being able to see the poor aliasing in place. Characters are well represented and the action moves at a great pace. Where it all goes a bit wrong is in how the fight is presented, it’s on a 3D plane, which is fine to control but the camera struggles to frame the action well with one or both characters sometimes disappearing from shot at least once a fight.

But, Byking have at least done My Hero Academia proud here. The developer has roots in games like Rival Schools, Marvel vs Capcom and Street Fighter III and it shows. It’s not the best fighting game ever made, but it’s certainly a competent one that delivers in terms of spectacle and quantity of stuff to do. There’s some missteps which will put off many but this is certainly one of the better games from Bandai Namco’s hefty anime output if you’re a fan I’d recommend giving it a look, if not I reckon it could still be worth checking out when it goes on sale.

My Hero One’s Justice certainly gets an A for effort but scrapes by with a C for it’s working out.