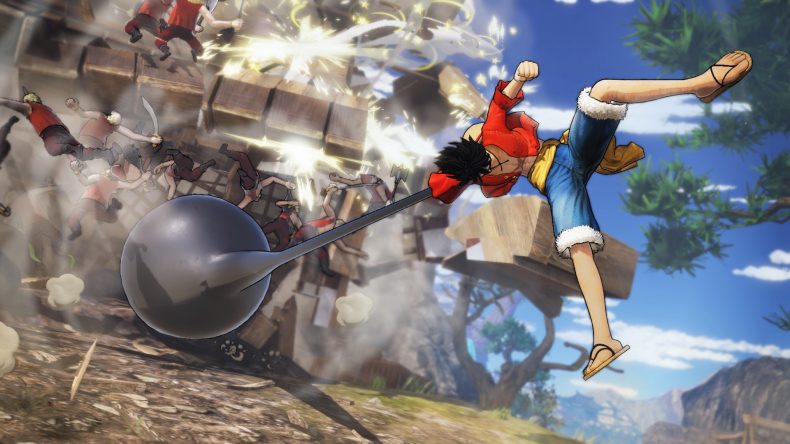 Fans of One Piece are very lucky when it comes to video game adaptations. From fighting games to sprawling action adventure games, Bandai Namco have ensure that fans of the popular anime could spend all of their free time playing exclusively One Piece titles. For many, the jewel in the crown of this mountain of games is the Pirate Warrior series. Now, Omega Force has returned with some big changes to this acclaimed Musou series for One Piece Pirate Warriors 4.

For someone who hasn’t played a Musou (or Warriors) style game, there’s a very specific appeal to the genre. You’ll find yourself fighting hordes of practically defenseless enemies with over the top moves, and it’s incredibly satisfying. Among these pitiful foes you’ll also find a few stronger enemies (in the case of One Piece Pirate Warriors these will often be named characters) which require a little more nuance. Some of these enemies have armour to break and become vulnerable after a big attack. These confrontations are where the difficulty lies, alongside strategising how to effectively push back an enemy army and capture their bases effectively. Protecting your allies and pushing back the enemy forces is the key to guiding Luffy and company to victory. There’s a huge amount of mission variety throughout One Piece Pirate Warriors 4. Some missions will find you overcoming an army of enemies, some require you to locate a specific enemy, and some are simply one-on-one battles. Not all of the mission types are created equal however, and the best stages are generally the ones with the basic “Defeat the enemy army” objective. One particularly irritating mission early on called for you to find the talent building in town, with a camera that doesn’t allow you to look up. The variety lends itself well to adapting the franchise’s storyline to the game however, with missions and cutscenes covering the most important moments of the anime.

The story focuses on eight specific (more modern) arcs of One Piece’s epic tale, beginning at the Alabasta Arc and stretching all the way to the most recent episodes. In previous outings, Omega Force has tried to pack decades of the show into a handful of missions. Pirate Warriors 4 doesn’t suffer from spreading the story so thin, and hours of missions and cutscenes help tell the familiar story in a more fleshed out manner. Newcomers to the choppy waters of the series will still struggle to keep up with the narrative, but fans will enjoy the trip down memory lane all the same. Outside of the story mode, you can replay missions as different characters in Free Log mode, or move straight into Treasure Log mode. Treasure Log is a huge selection of (largely) unrelated missions. There’s potentially hundreds of hours of content to be found here, with three tiers of stages to play, crew levels to grind and a host of unlockable characters. It wouldn’t be a Musou game without an incredibly diverse cast of characters, and Pirate Warriors 4 doesn’t disappoint in that department. If there’s a series favourite you’d like to play as, chances are they’ll be available.

Each playable character fits into one of four classes – Power, Speed, Technique and Sky. Each of these character types have their own quirks, but I generally found the more maneuverable Speed and Sky options more fun to play as then their clunkier alternatives. Whatever class you choose to play as, all of your favourite pirates have vastly different attacks and specials to discover and level up.

One of the major changes to the series is the way that special attacks work. Instead of building up one special meter and unleashing fury on a group of foes, you can now set four separate abilities that charge independently. These range from huge flashy attacks, to buffs that turn you into an (even more) unstoppable powerhouse. Each character has multiple of these that you can unlock, and set between battles. There’s a lot of depth to leveling up your characters. You use character coins and money that you obtain after beating missions to obtain level up your island themed skill grid. You can give a character stat boosts, passive buffs and new attacks, and really bring out the potential of your favourites.

The biggest issue with One Piece Pirate Warriors 4 is the camera, which is at best unreliable, and at worst unusable. When facing multiple of the weak opponents it’s not really an issue, but when you lock onto one of the tougher opponents it’s awful. The camera follows the enemy far slower than the action, and sometimes just unlocks for no reason. It’s a really unfortunate blemish on an otherwise fun game.

One Piece Pirate Warriors 4 is an enjoyable Musou game with some fantastic new additions to the genre that’s let down by some terrible camera issues. If you’re a fan of the series (and thus able to follow the story) there’s a wealth of content to explore if you can overlook its flaws.

Read our review of the Nintendo Switch version, here.

A rare innovative Musou game, with tons of content but a handful of issues. If you can wrestle the camera into submission, and especially if your One Piece fan, One Piece Pirate Warriors 4 is full of treasure once you dig past its flaws