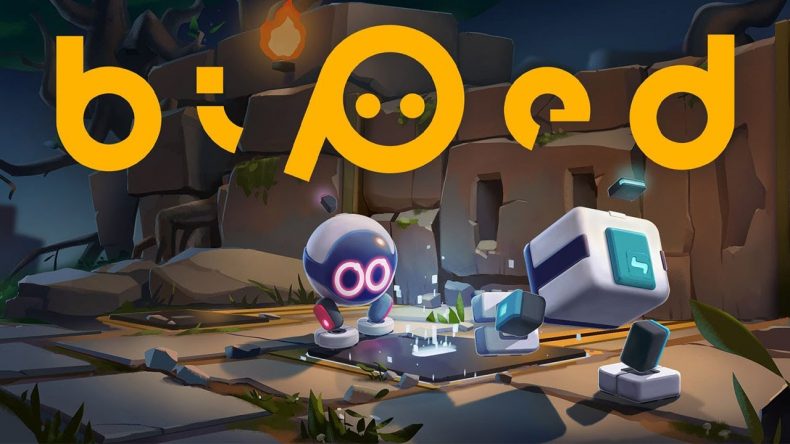 Walking in a video game is rarely a difficult task. One press of a button or tilt of an analogue stick and your character will trot along their merry way, putting one foot in front of the other with wreckless abandon. That’s not the case in Biped however, as foot control is the key to success in this single player and co-op 3d “platformer”.

You play as one of two adorable little robots, on a quest to activate beacons on earth. This means traveling to the end of 8 levels, and navigating the obstacles found on the surface, one foot at a time. Although the story is basic, the charming little bots are all the motivation you’ll need to stomp your way through to the goal.

Each of your analogue sticks controls on of your bipedal legs, pushing the stick in a direction stretches a leg out and releasing it puts your foot down. For more precise footwork, an indicator shows where your foot will land as you make each step. On smooth surfaces, you can also glide by pushing both sticks in the same direction. All in all it’s a surprisingly easy-to-learn way to maneuver (in part thanks to a great training stage) but hard to master – specially when faced with the huge variety of hurdles littering the earth. Each level has a new and interesting selection of obstacles for you to overcome with your stepping-based powers. From simple levers and see saws, to magnetic surfaces and even a treadmill raft. Every single one of these obstructions is well-designed and entertaining to overcome, and because there’s such a variety, you never get the chance to be bored.

While taking on the challenges in Biped alone is fun, doing it in co-op is even better. There are two separate campaigns for solo and local co-op play, with entirely different levels. Each campaign takes around 2 hours, so if you don’t have a friend to play with locally, there isn’t a lot of content to play through and you’ll be missing out on half of the game. When playing with a partner, you’ll have to really work together to progress to the beacon. Balancing a seesaw together or taking alternate steps on a colour-coded platform is a tricky task, but incredibly rewarding when you succeed.

The single player campaign makes up for the lack of buddies with delightful AI allies throughout. Helping another little robotic ally across an obstacle is made easy by them counting down between each step, and it adds yet another interesting challenge to overcome as you progress through the stages. On your journey you’ll go through the obvious selection of stereotypical platforming levels. There’s the forest level, the desert level, the snow level and the water level. Although it’s not particularly inspired, there’s something comforting about these familiar tropes. There are optional challenges for the Biped completionist to attempt on each stage. If you beat a stage with less than 3 deaths, collecting all the hidden stars, or with a fast time you’ll earn a medal. It’s an entertaining way to get you to replay levels you’ve already beaten, and forces you to play in an entirely different way.

As well as stars, there are also coins scattered around Biped. This other Mario inspired collectable is worth gathering for one reason: buying cool hats. Your cute little robot can wear any of the purchasable hats, from cowboy hats to a googly-eyed chicken cap. Even robots deserve the latest fashion.

Biped is an excellent little adventure in walking, packed full of interesting ideas. Each level feels fresh, and tackling obstacles with a friend locally is incredibly entertaining. If you’re playing alone there isn’t a huge amount of content, but this unique game makes up for it in creativity and personality.

Not a huge amount of content if you're playing solo

Biped is a unique 3d "platformer" with a really interesting way of moving your character. Entertaining in both single player and co-op, Biped is packed full of creative obstacles and unique challenges.