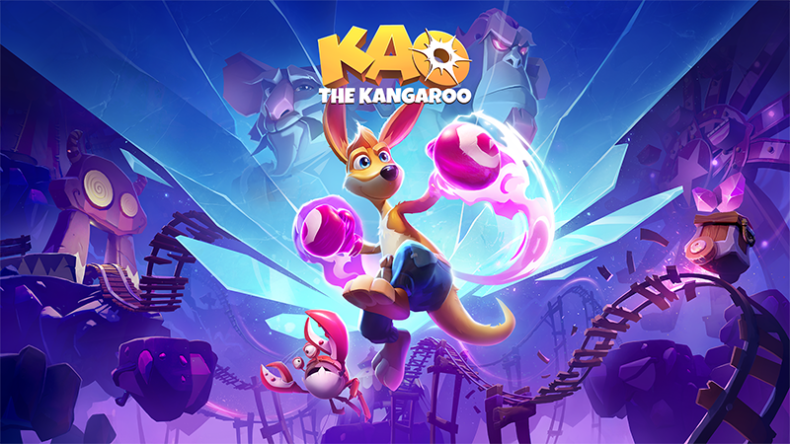 I have to admit, Tate Multimedia’s Kao the Kangaroo series alluded me in the early 2000s. I was pretty much obsessed with 3d platformers at the time, but somehow this little marsupial escaped my notice. Over twenty years later though, Kao is back for more jumping and punching. I’m always happy to check out a new 3D platformer, so thought I’d better hop to it.

Kao isn’t having the best time when the game starts, with his father and sister missing from their tropical paradise home. Not one to sit around and do nothing, our plucky young hero sets out on an adventure to find them with the help of his dad’s magic boxing gloves. The story isn’t particularly crucial to the game, which is fortunate because most of the characters are pretty grating.

If you’ve played a 3D platformer before, you’ll feel immediately at home with Kao the Kangaroo. Kao has all the moves you’d expect, he can jump, double jump and do a classic spin attack. If you like jumping from platform to platform in colourful worlds and collecting shiny shit, then you already know if you should buy this game. 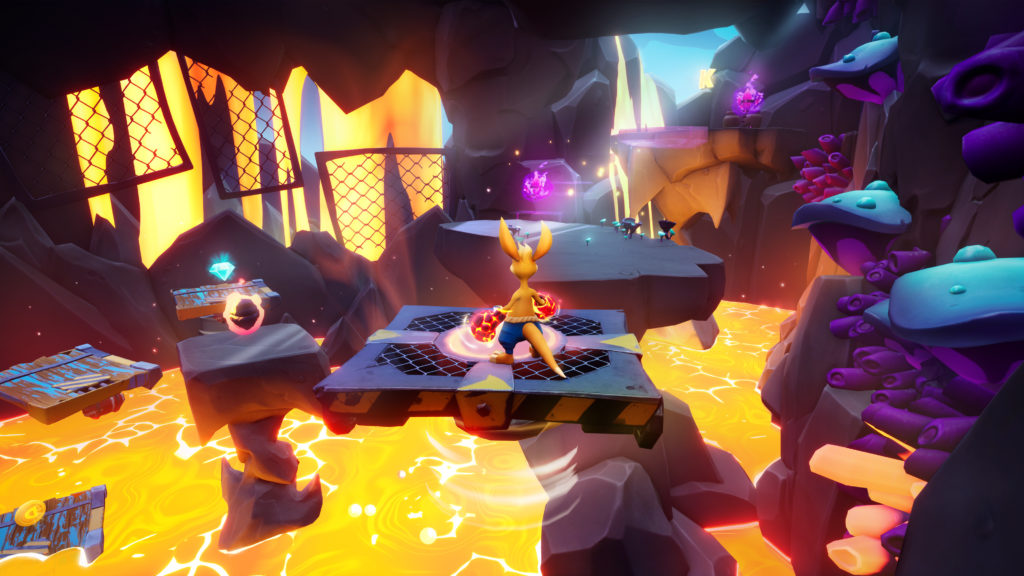 There’s also a focus on combat thanks to Kao’s signature boxing gloves. Bashing square will deal with most enemies pretty quickly, and when you land enough punches you’ll fill your power bar and be able to unleash an explosive special attack with the triangle button. There’s also ranged enemies that fire various projectiles at you, which you can reflect back at them with a well timed spin. It’s fairly simple to deal with most foes, but also pretty satisfying.

Your main goal in Kao the Kangaroo is to collect a big old list of stuff in each stage. There are mysterious runes that unlock new levels, the letters that spell KAO that unlock outfits at the shop, and blue crystals that… don’t seem to do anything. If you love making sure you pick up every little shiny collectable in a game then Kao will appeal to you, but outside of the runes none of them feel particularly essential to gather.

Outside of stages you’ll be sent to an overworld full of nooks and crannies to explore. These areas have plenty of collectables too, as well as entrances to new levels and a shop to spend your hard earned coin. There’s some very handy extra health to purchase, as well as cool new outfits and pointless extra lives. You’ll always have more than enough cash to grab what you need, especially once you’ve purchased the retro Kao costume and realised nothing will ever compete with it. 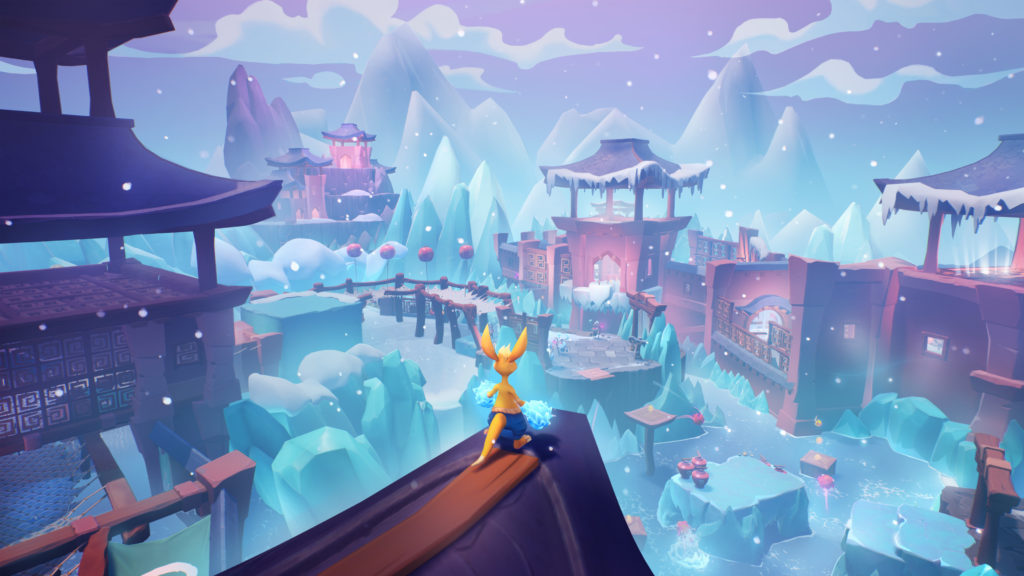 As you progress through the game, new interesting elements get added to the mix. Kao the Kangaroo doesn’t do anything particularly innovative, but has all the 3d platformer staples you know and love. Rail grinding, grapple points and those stages where you run into the camera from the Crash games are all here, and they’re all exactly how you remember them. Even the worlds are the standard platform game staples, from volcanoes to ice mountains. Kao is very much a “greatest hits” of the genre, which isn’t necessarily a bad thing.

Perhaps the most interesting parts of Kao the Kangaroo involve the elemental powers you get for your gloves. Fire gloves are the first of these, and can be used to burn through spider webs or melt ice. Ice gloves can freeze water to be walked across or slide boxes on. There are a few puzzles that take advantage of these different powers, and although not particularly taxing on the brain they’re a nice change of pace.

The boss fights in Kao the Kangaroo are also brilliant, and pretty damn challenging. Each big bad has a variety of attacks you’ll need to dodge, before revealing a weak point to batter. It’s the typical loop of dodging more and more powerful attacks, but each one is really well designed and a joy to beat. 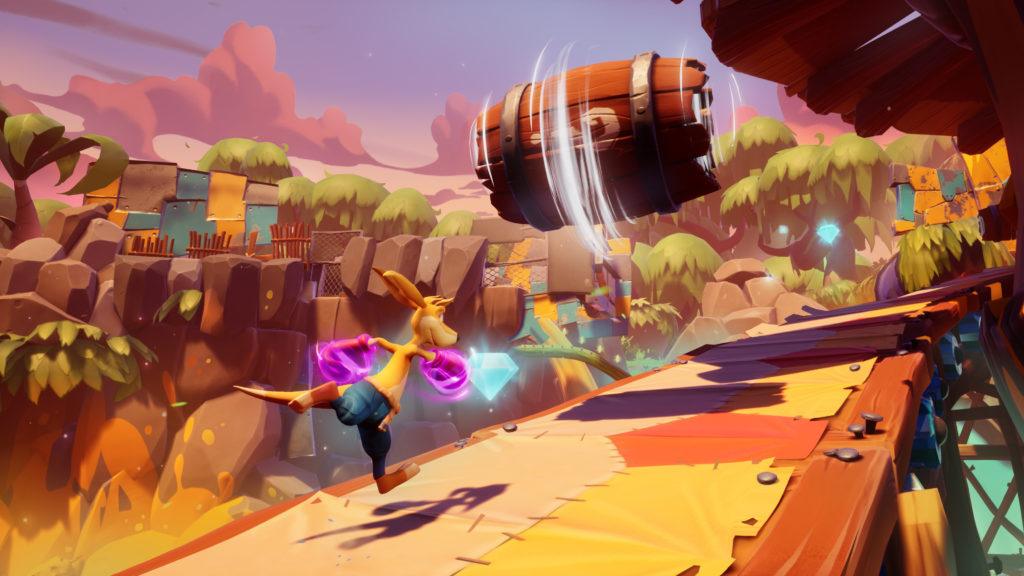 I really enjoyed my time with Kao and company, but the game isn’t without some significant faults. There are a lot of surfaces that look like they can be jumped on which are just set dressing, as well as a load of invisible walls preventing you from going out of bounds. I lost a lot of health jumping onto rocks I thought would lead to more loot only to slide off them into pits or lava, and it was consistently frustrating.

Another issue I had involves the collectibles. Some collectables will leave your inventory when you take damage by falling into water or lava, and it’s infuriating to have to go back to collect them again after making one small mistake. I’d expect it after maybe losing a life, but after taking one hit from one specific source is ridiculous and simply poor game design.

Kao the Kangaroo is a throwback to 3D platformers of the past, with plenty of collectables to grab and themed worlds to explore. It does have some issues with invisible walls and fake platforms, but if you enjoyed 3d platformers in your formative years you’ll find a lot to love in this adventure down under.

Kao the Kangaroo is a fun throwback to platformers of the noughties, but it has a few issues that really hold it back.