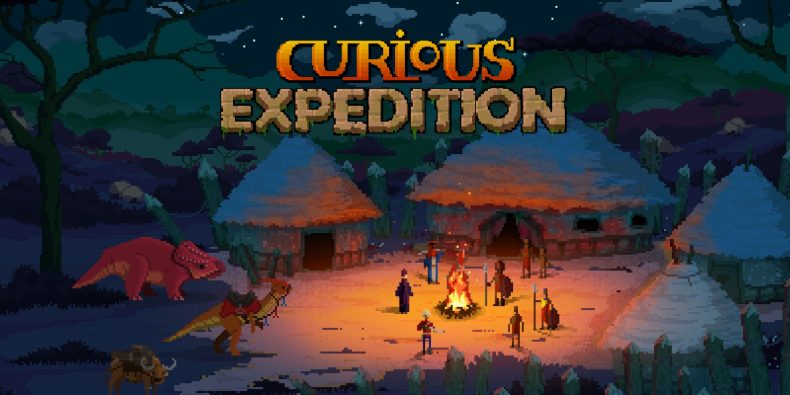 A clumsy companion who kept losing valuable supplies, a cannibal who ate my bodyguard in the night while the rest of us slept, and a black panther that refused to leave us alone were just a few of the hardships I faced as explorer Richard Burton, the character I chose for my first run of Curious Expedition.

It being a roguelike meant that my following run as pacifist chemistry pioneer Marie Curie ended even quicker, when an Arctic wolf wiped out my entire party in minutes. Such is the world of Curious Expedition, where the unprepared and inexperienced die unmourned and uncelebrated in the darkest corners of some godforsaken far-off land.

Cutesy pixel art and pleasant chiptune music conspire to present an almost twee atmosphere that leaves you dangerously open to the horrors to come. It begins when you select your adventurer from a roster of famous historical figures like the aforementioned Curie, Charles Darwin and Nikola Tesla, to name a few. Each begins with different gear, skills, stats and, crucially, allies, so taking the wrong character on the wrong kind of jaunt is lethal. As you’re up against four other members of your Explorer’s Club, you’ll get to pick from two destinations each time, ranging from deserts and jungles to Arctic tundras and arid wastelands. Each is beset with terrors, too, as hostile natives, wild animals, disease, curses, and plain old bad luck assault you at all times. Not to mention hunger, fatigue, and your own growing insanity. All these things must be managed if you wish your expedition to be successful. You’ll be given sidequests to earn greater fame, and the more artefacts and valuables you collect each run, the greater your standing will be. They might even build a statue of you.

Each destination is presented as a hexagonal grid, with villages, temples, shrines, and other points of interest occupying one space each and the rest filled with various terrain. Areas with a red outline are prowled by enemies and should be avoided where possible, though the enemies do move about a bit, too. Each leg of the journey drains your water and your sanity, and throws up new ways to destroy your resolve. In order to “finish” the game you’ll have to undertake 6 successful forays, which is incredibly hard. The wrong team will see you all dead pretty quickly, and simply making a mistake, over-extending your reach, trading away valuable supplies or misreading a fight will have the same outcome. Combat is an unforgiving affair, too, and not explained particularly clearly. It’s essentially a game of dice, with each roll offering attacks, buffs or defensive options. At any time, the enemy could take out a member of your party or badly wound one, which has ramifications for the rest of the trek.

It plays well on the Switch, and certainly feels more at home on the handheld than it does on a PC, but the on-screen text is tiny and there’s no option to resize it. Played docked it’s less of an issue, but on the smaller screen it all looks just a bit too tiny.

Curious Expedition is fun, if you like pushing huge brightly-coloured boulders uphill. It’s an enjoyable roguelike with a likeable 19th Century setting, humorous writing and lots of content to explore and discover, but it’s a seriously challenging adventure that will test your patience over and over again.

The Curious Expedition is an enjoyable roguelike with a likeable 19th Century setting, humorous writing and lots of content to explore and discover