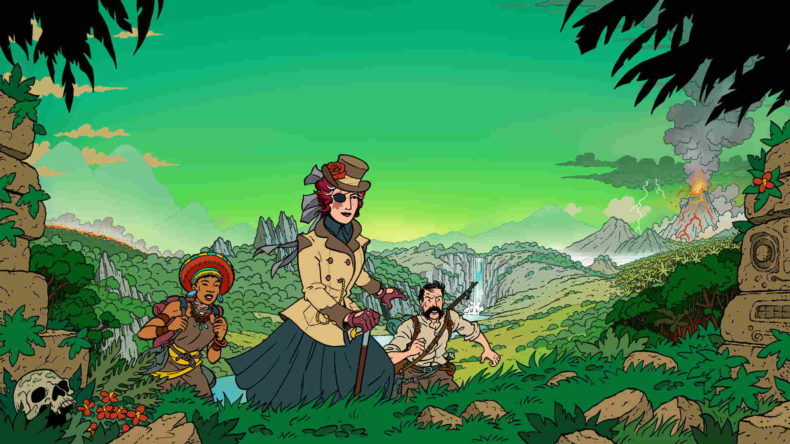 Curious is an apt prefix for this oddball roguelike adventure, Curious Expedition 2. Set in a fictional 1886 and with a World’s Fair set to take place in three years, it is your job to visit a series of procedurally generated islands and procure treasures to serve as your prized exhibits. With a hand drawn art style that evokes Herge’s legendary Tintin series, you explore the hexagonally segmented, fog shrouded islands with an ever-evolving rag-tag party of characters that range from human adventurers to intelligent beasts.

Moving uncovers more of your terrain, but comes at a cost. Sanity is the in-game currency and will deplete with each move. You can replenish it by consuming things like chocolate and alcohol, which made me chuckle. Running out of sanity points triggers a game-ending cataclysm, so is best avoided.

As more of the unfamiliar, and often hostile territory opens up, you encounter native tribes living in villages, temples and other forms of housing. You can speak to them, and a multiple choice mechanic kicks in. I stumbled upon a group of indigenous folk and was presented a choice of succumbing to them and asking for acceptance, or bamboozling them by pretending I had magical powers. Choices like this can lead to progress, but also to failure and death. 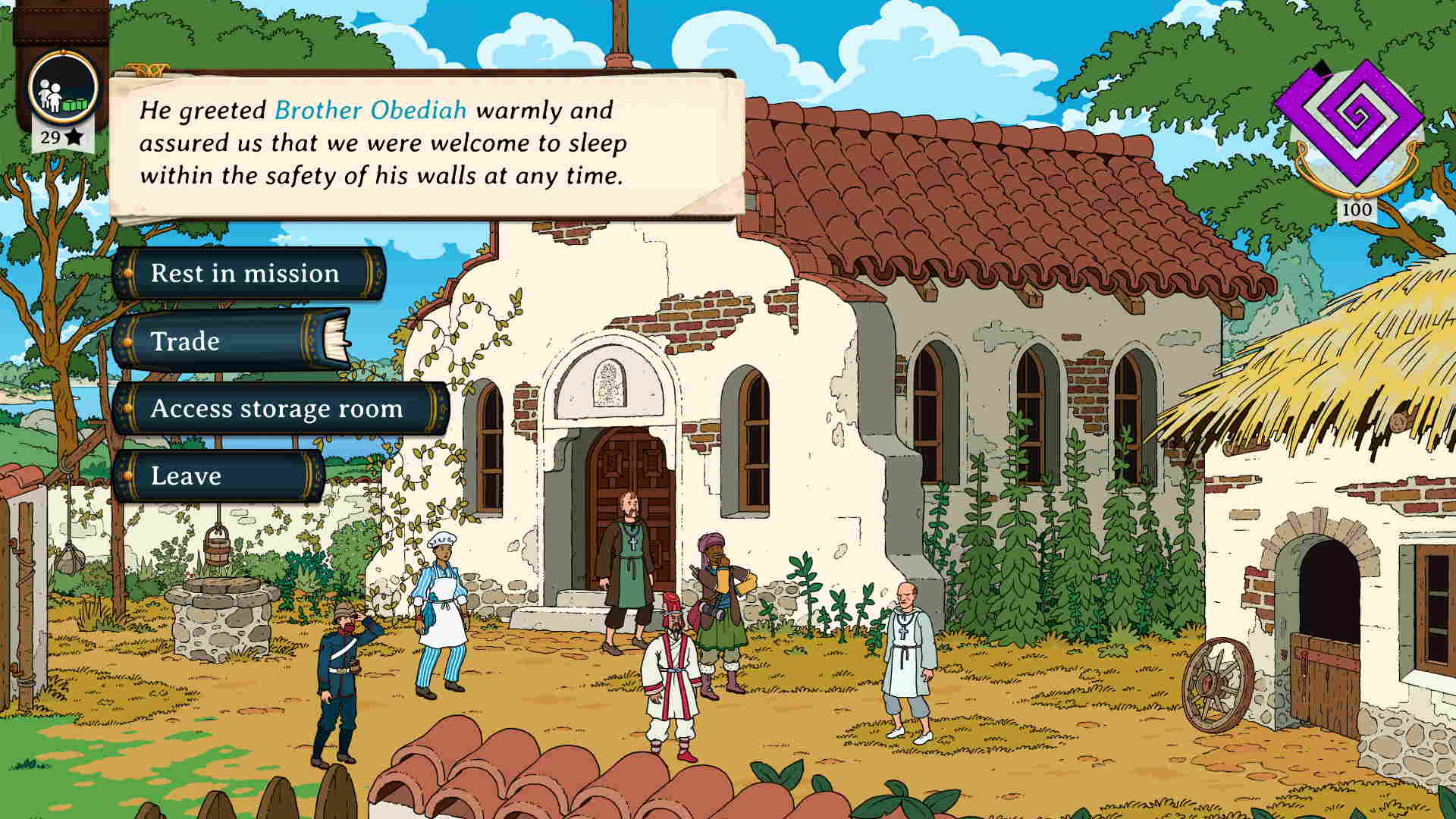 The races and varieties of folk you meet do come with a certain amount of what can only be described as racial stereotyping and cultural appropriation. This is very much in keeping with the era and theme of the game. But there’s no question it may not sit well with some. Elsewhere, there are fantastical and way-out encounters with anthropomorphic moles and dinosaurs. Oh, and and steampunk robots. As I say, it is bonkers.

There are RPG style combat encounters with some absolutely wild enemies on display. And there’s a haphazard dice-based system that determines what attacks you can use. One minute you are trying to take down a giant bat or tackling a Dune-like sand-worm. The next facing off against Jules Verne himself. Don’t expect sophisticated mechanics. That said, do expect to die a lot. Or  find you don’t have the right tools to do the job you need to do. 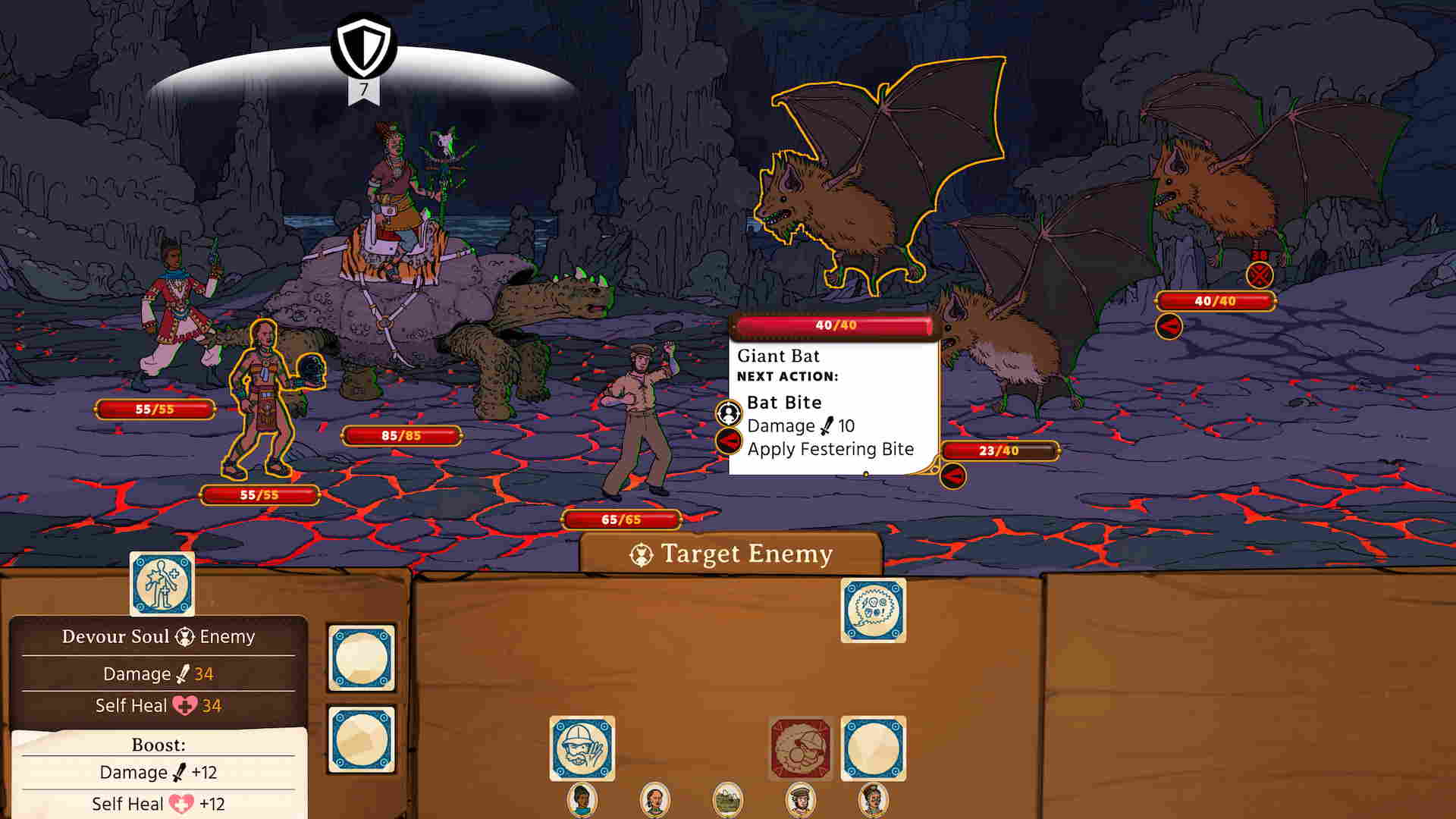 Help comes from your choice of one of three guild-like sponsors that furnish you with cash to fund your expeditions. These trio have their own themes including science and spiritualism. After each runthrough you return them what you have found and are rewarded with items that can help your next jaunt. Each trip is completely different. There are times where the odds are simply stacked too high against you. Or you make the wrong choices and die repeatedly.

The sheer variety of different companions and characters, and the genuine quirkiness and sense of wonderment just about compensates for this. This is a seriously odd, fiendishly difficult, yet somehow weirdly charming experience that sucks you in against your better judgement.

Randomness can frustrate
Some cultural faux-pas

Curious Expedition 2 is a seriously odd, fiendishly difficult, yet somehow weirdly charming experience that sucks you in against your better judgement.