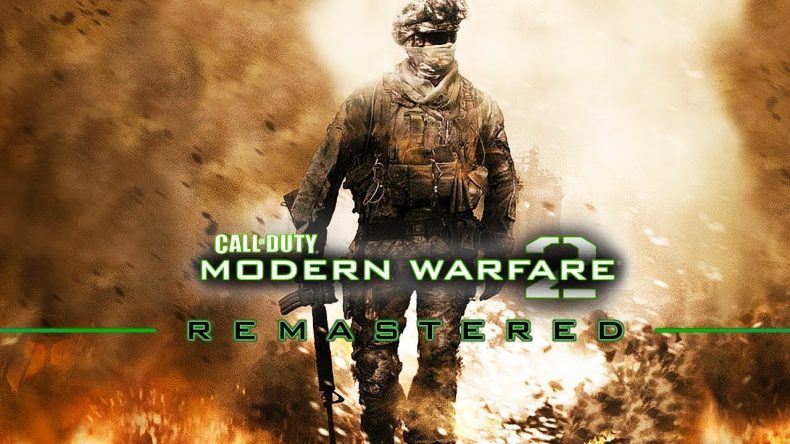 Call of Duty: Modern Warfare 2 Remastered is absolutely bonkers! More insane than I remember, and I recall thinking defending “Burger Town” from a swarm of invading Russians deep in the American heartlands was mad stuff even back in the day. Now, it feels like the batshit has been dialled up to eleven. It feels like a game from a different world, and in light of recent events, it really is from another time. And yet, and yet, it feels such a perfect time to be replaying this remastered version from 2009.

In many respects it isn’t as a good a campaign as its predecessor, but it is way more spectacular, in every way. The set pieces keep on coming, from speeding down a mountain side on a snowmobile, dodging and strafing gunfire from an army of angry Russians, to pelting across the rooftops of the Brazilian favela, it is never short of exhilarating moments. The story is well known, but in case you haven’t ever played it before, or you have forgotten most of it, here is a brief synopsis. Zakhaev, the main antagonist from Call of Duty 4: Modern Warfare is dead, but he has become martyred in his homeland, causing a wave of ultra-nationalists to rise up. In the game’s most shocking moment, mastermind Viktor Makarov takes a team of people through a Russian airport, gunning down all the civilians there in cold blood. The Russians then frame the US and, unbelievably, invade America with some radar subterfuge. The campaign sees you fighting on the front line of the conflict by following US Army Ranger Ramirez, while Task Force 141, featuring the familiar faces of Gary “Roach” Sanderson, John “Soap” MacTavish and Captain Price, work in the background trying to foil Makarov’s schemes. Got that? Good, because you are in for a ride.

And it is quite the ride, never letting up on the action, even in the quieter moments with Task Force 141. The remaster is excellent in every way with improved character models, lighting and visual effects. Lip synching appears much improved on how I remember it from the original and there is some cool depth of field effects when aiming down sights on your weapon that I don’t recall being in the 2009 version either. Particle effects during some of the more traumatic and explosive parts of the game really give depth and life to the set pieces. The characters have always been strong, particularly the British crew and it feels good to spend time with them again, especially as the audio seems much improved as well, the fantastic voice acting complemented by sounds of gunfire and chaos. There are some issues though: much like the remaster of 2007’s Modern Warfare it is evident that some of the techniques to ramp up difficulty have persisted in this remaster too. Endless grenade spam and the monster boxes of enemies that spawn over and over until you push up are still here, and feel dated. The AI just doesn’t seem as intelligent as more recent releases, and even ally AI consistently gets in your way or pushes you out of cover. On the lower difficulties this isn’t so much a problem as the game provides you with endless gun fodder to spray at indiscriminately, but on the harder difficulties this notion of running into enemies with the singular aim of making them de-spawn rather than picking off a set number feels out of place.

It is also a shame that this remaster, as welcome as it has been doesn’t feature the Special Ops mode nor the multiplayer. Modern Warfare 2 is the one that I remember most fondly, not because of the campaign (as much as I enjoyed that), but because it was the one that cemented my love of the multiplayer. I knew every single one of those maps like the back of my hand. I’ve screamed in frustration at the buggers using the Commando perk and cackled with glee while using the “noob toob”, or whilst running with akimbo model 1887 shotguns. The Harrier followed by the Pave Low kill streak was an absolute killing field, and MW2 was the game that got me into playing Call of Duty multiplayer in Hardcore. Because of this, the remastered version feels lesser for its omission. The reason for such an omission given by Infinity Ward and Activision was that they didn’t want to split their player base between this and the recently released Modern Warfare. It’s a reasonable explanation, but this remaster as with the previous one is about nostalgia, and much of mine is inextricably linked to the glorious, chaotic multiplayer, and as such I’m disappointed that it doesn’t feature here.

My review of Modern Warfare Remastered said that at times it felt like a ghost of a game. A ghost because while it delivered everything that I remembered of it, it wasn’t ever going to be enough to bring back the feelings I had when I first played it. I feel different with this remaster. I think in part because the campaign is clearly the tricky second album for Infinity Ward; in trying to match and improve upon the heights of the previous game, they just made everything bigger and more outlandish. The campaign is pure silliness, but it works. Somehow, it just works.

An excellent remaster of a bonkers campaign, that feels great to play again. It's just a shame that the Special Ops and multiplayer modes didn't make their way in as well.

You may also like
ActivisionCall of Duty: Modern Warfare 2PC