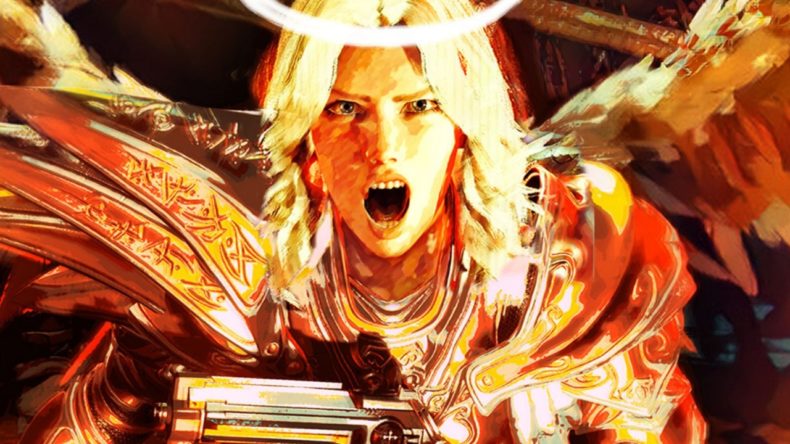 When BPM: Bullets Per Minute hit PC last year it took a few people, myself included, by surprise. On the outside it looks like a low-rent Doom clone. It’s all religious imagery, pounding music, flames and metal and rage. But on the inside, it’s one of the coolest shooters of the last few years.

You take control of a very angry Valkyrie named Goll on a mission to blow the ever-living shit out of an army of demons and beasts. The procedurally generated stages drop you in with a pistol and a dash move, and that’s it (at least, to start with). You move from room to room, blasting demons to bits and can’t proceed until everything is dead. The twist is that you need to jump, dash, shoot and reload to the rhythm of BPM: Bullet Per Minute’s exceptional soundtrack.

Miss the beat and you’ll be unable to fire or dash as far, and if you’re out of step on a reload you’ll be devoured in seconds. Enemies fly, crawl, run, cling to the ceiling, teleport and charge, and standing still too long will see your paltry health bar depleted in seconds. Death returns you to the very start of the run each time, and strips away everything you’ve earned. 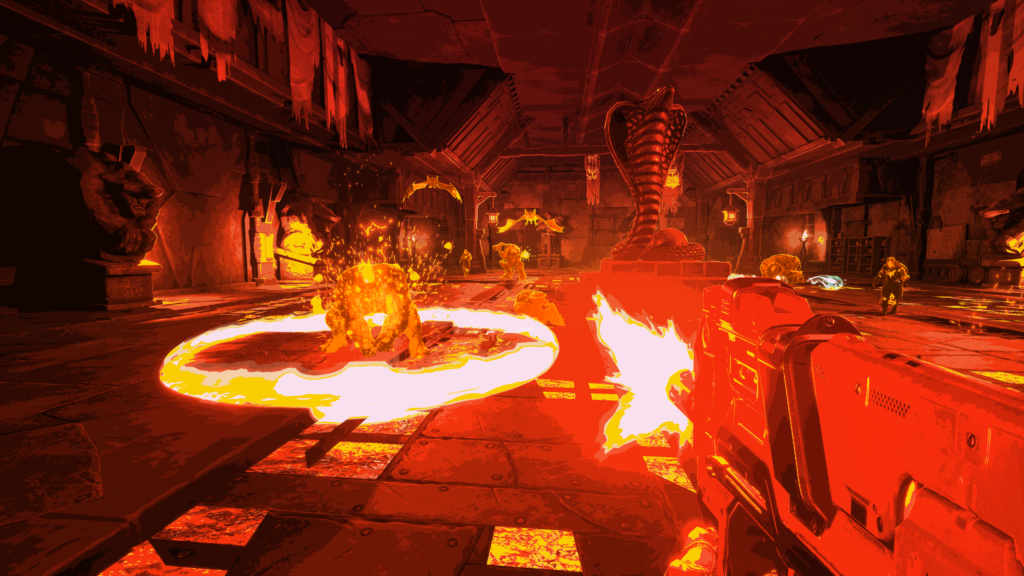 Vanquished enemies drop coins which can be used to buy new weapons, power-ups, health refills and special abilities. Each weapon has a unique feel, fire rate and reload system. The boom-boom-click-clack of reloading the standard pistol is ridiculously satisfying, and when you find the rhythm and ride it all the way to oblivion it’s an incredibly cathartic experience.

Once a room is cleared, a chest will appear within which you’ll find randomised power-ups or consumables. Sometimes it’s a much-needed health potion, sometimes it’s another coin, or a suit of armour, or a key to open locked chests and doors elsewhere.

Special rooms are dotted around the map. The Blacksmith sells new weapons and armour, while Huggins, the big yellow dancing chicken thing (seriously) sells upgrades that will last a run. There are challenge rooms, treasure rooms, a bizarre bank run by cute little critters that will store your gold for you, and a library wherein you can learn special abilities for whichever Valkyrie you’re currently using. 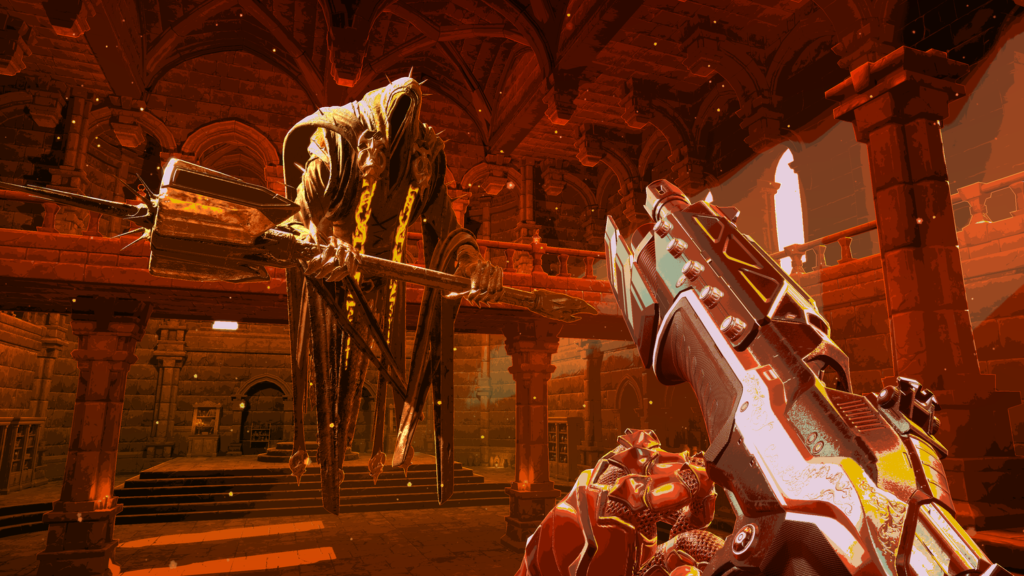 Of course, there are also boss rooms, but even the bosses themselves are randomised to an extent. For example, the first boss, the Draugr, can come in various flavours such as a giant version. Going in unprepared is a sure-fire way to die early on, but once you’ve learned the boss’s patterns your gear becomes less important. Which is a good thing, because BPM: Bullets Per Minute is very much a rogue-like, and everything is randomised each run.

Sometimes the level will be frozen, and you’ll slide around the floors. Other times the Asgard you load into will be on fire and you’ll take more damage, or enemies will drop skulls that explode when you collect them. Weapons, power-ups, gear and enemies are as randomly generated as the room placement. The console edition comes with the new Hellish difficulty, too. Although frankly I find easy tough enough.

This makes every run different, but means you’ll never know the optimal route until you start. After a certain amount of retires, you will begin to form your own patterns. You’ll know which rooms are worth going into, which weapons and items work best for you. Bosses will become much easier because you will learn their tells and attacks. You can mix it up as you unlock more and more playable Valkyries, as each has access to different powers and they begin with different weapons. The second Valkyrie, Freyr, has more starting health and quicker movement. This makes clearing the first two areas with him a little easier, but it takes some time and effort to unlock the next. 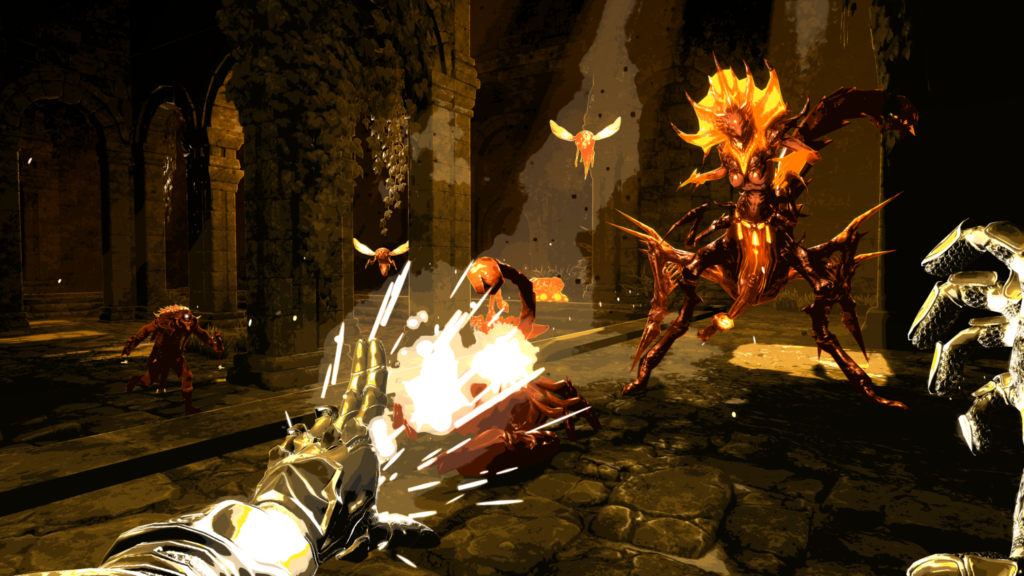 Music to murder by

It’s hard to overstate exactly how good BPM: Bullets Per Minute feels when you start to nail the rhythm of each area and weapon. I lost count of the times I saw ROOM CLEARED burst up on the screen and realised I was Joker-smiling from ear to ear. When I reviewed the PC version I wasn’t overly thrilled by the aesthetic and I’m still not. One of my only complaints is that the weird art style that makes it look like a watercolour painting is just odd to me, and makes some details in each stage difficult to make out.

I also had to fiddle with the sensitivity on the controller. Playing this on PS5 (it’s a PS4 title), I found the controls to be incredibly loose and have a tendency to dip low for some reason. I tweaked the dead ones and sensitivity until it felt right and had no further problems, but this a fast-paced and largely imprecise blaster and you’ll need to feel comfortable with the movement to enjoy it. It’s interesting to note that while the PS4 and Xbox One version runs at 30fps in 1080p, playing on PlayStation 5 or Series S and X will up that to 60fps in 4K.

There are very few things I don’t like about BPM: Bullets Per Minute. The soundtrack kicks ass, the shooting is fun and therapeutic, the level design is solid. Some runs flow better than others because of the randomisation of pretty much everything. It can be incredibly frustrating to get past the third or fourth boss and lose everything you’ve worked for, but that’s the nature of the genre. Those seeking a hardcore shooting challenge and something a bit different from the usual will find both in BPM: Bullets Per Minute.

Art style is hit and miss
Heavily reliant on RNG

Those seeking a hardcore shooting challenge and something a bit different from the usual will find both in BPM: Bullets Per Minute.