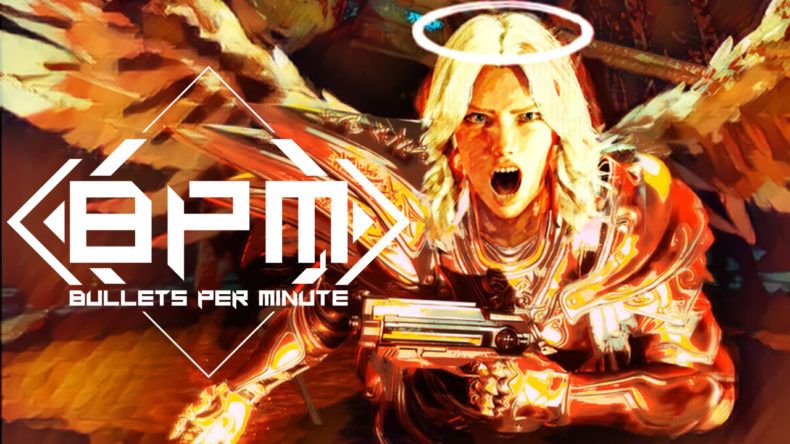 I’ve always said that music is soothing. It’s a way to quiet the rest of the world, to swaddle my problems in a comforting melody and let the stresses of the day fade away. Of course, that was before I played BPM: Bullets Per Minute. There’s a hypnotic rhythm to AWE Interactive’s roguelite shooter that proves endlessly intoxicating, pulling you back in even when the steep, relentless difficulty makes you want to snap your keyboard in half.

At a glance, BPM will likely remind you of Doom. It has a strikingly similar atmosphere, though the art style itself is quite different. BPM has a dreamlike sheen to it, an intentional muddiness that covers up a lack of detail and hides a multitude of tiny sins. You play as a Valkyrie, blasting your way through randomised dungeons named after locations from Norse mythology; Asgard, Vanaheim, and Nidhogg for example. 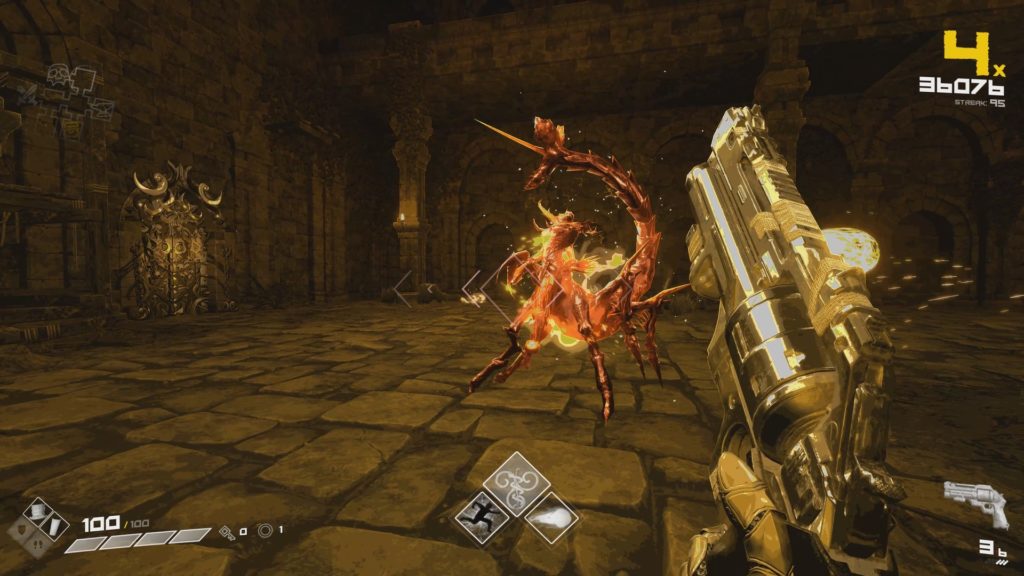 Armed with a pistol (initially), a double jump and a dash, your objective is to clear rooms of enemies systematically, reaping the rewards and growing steadily stronger until death sends you back to the start. The core conceit here is that shooting and reloading must be executed in time with the game’s epic soundtrack. A beat indicator adorns the targeting reticle, turning a standard shooter into a frantic rhythm game. Some rooms are crowded with demonic beasts that leap, spit poison, or rush you. They fly, crawl, and sprint, and a few hits is all it takes to kill you – even on Easy (the default setting of only two) it’s punishing. Failure to hit the beat either for firing or reloading will fail the action, and some guns require two, three or more presses of the reload button to perform the actions in time with the music. Shotgun shells load one at a time, for instance, and timing your jumps and dodge with the rhythm boosts their effectiveness. As with Doom there’s very little cover and the best way to avoid damage is to circle strafe like a mad person.

When a room is cleared a chest will appear containing either gold coins, a key, a health or shield refill, or a piece of armour or gear. These items aren’t cosmetic (it’s all first person) but bestow buffs on you that last the entire run, or until you swap them out. Some can boost your jump, or give you the ability to fly; some grant auto aim, infinite ammo, greater damage; others still vamp health from the enemy or create an aura around you that insta-kills enemies. One even gives you an extra life. 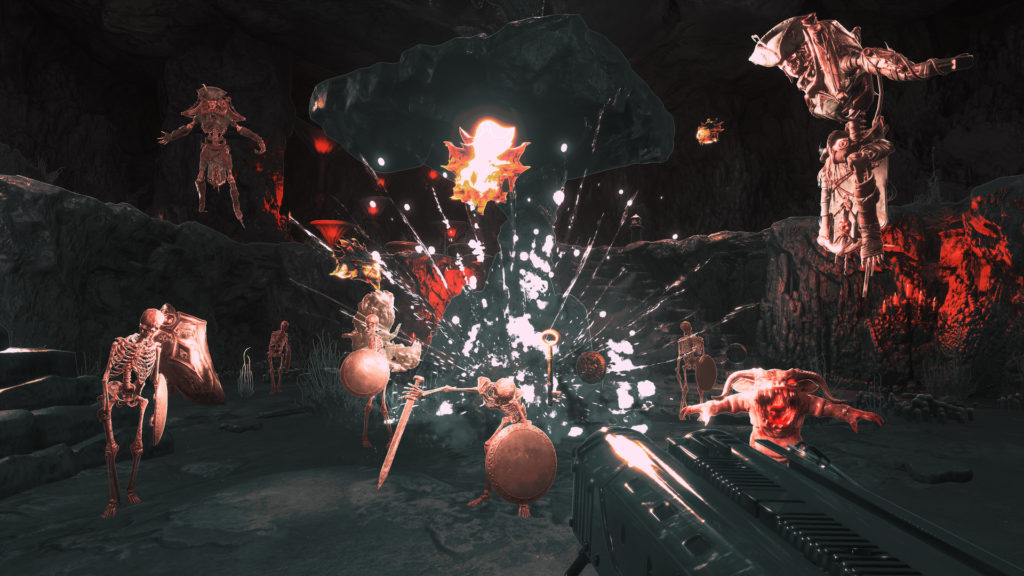 In addition to this, each room contains a single useful feature. Often these are shrines that accept a gold coin in exchange for a boost to one of your attributes, or maybe three boxes that may contain enemies, traps, or gear. Sometimes a room has no enemies, but allies in the form of a bank (to save up your coins), a Blacksmith to swap out your gun, or Huggins, an enormous yellow chick who never stops dancing, but sells health refills, armour and buffs. If you find a library you can equip a second or third ability, which again can turn the tide in your favour. Some damage the enemy, while others can conjure a temporary shield or speed boost.

All these buffs and trinkets must be savoured and used effectively. A lucky series of drops can make all the difference in a run, but you don’t keep any of it when you die. Nothing carries forward, not even your progress past bosses. There’s one tough fight at the end of each randomised dungeon, and while the bosses themselves don’t ever swap or move, they do come in various forms such as Giant, Dwarf, Champion or Lethal variations. There are others, too – and each time you load a dungeon it may be themed. In a Dark dungeon you’ll only have a small circle of light by which to see; in a frozen dungeon the ground is slippery and precision movement almost impossible. There’s so much packed into BPM that at first you won’t care if you die, because each death will reveal something new in the next run.

However, this feeling won’t last forever, and Bullets Per Minute is brutally hard. Making it past the first two bosses will unlock the next area and the second Valkyrie (there are five in total). Freyr is tougher than Goll, with 150 Shield instead of 100 HP, a more powerful weapon and faster movement. It makes the first two levels much easier, but you’ll need to pass those two and the next four in a single life to unlock the next Valkyrie. 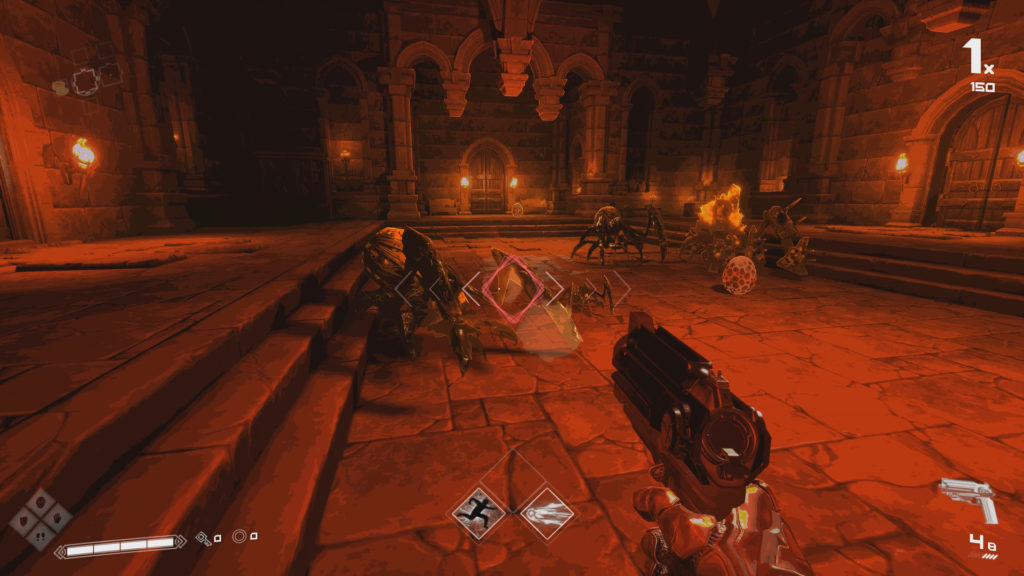 I found switching weapons to be not worth the trouble, as you’ll quickly acclimatise to the weapon you have and each new one will require you to relearn its rate of fire, shot pattern and reload speed. Doing new things to the same beat while also not getting eaten isn’t easy.

I don’t have many complaints about BPM. The difficulty is steep but not unfair. It’s all about the buffs and gear you unlock, and I’m sure speedrunners will love this, nailing runs with no power ups or all in darkness, etc. If anything, I’d have liked just a few randomised music tracks per dungeon, because as cool as the music is (and truly, the soundtrack to this game is incredibly good) it can become repetitive when you’re dying and dying and dying.

Graphically, it’s ok. The enemy models are nothing special, the usual assortment of grotesque beasts, giant bugs, oversized animals, mutated humanoids, etc… And while the environments get the atmosphere right, they lack distinguishing features of any kind. There’s nothing to make you look at the architecture and appreciate what the dev has done; it’s all just serviceable background. The low number of colours can also make it hard to see what has spawned from a chest, or pick enemies out against the walls, which is a little frustrating.

BPM: Bullets Per Minute is a relatively small game that packs an absolute ton of stuff into its little frame. There are so many enemies, items, buffs, abilities and secrets that just wasting a few incarnations to explore can be well worth it, and experimentation is key if you want to make the most out of all the gear and items.

Putting the manic, nail-biting gameplay of an old school first person shooter to music is a genius idea, and as a result BPM feels truly innovative. I’ve never played anything like it and, while at times the difficulty has gotten the better of me, I haven’t been able to stay away. So often that “one more run” has yielded a new buff or item that has changed the way I play or boosted my chances of survival enough to carry me through a tough spot. I hope this game does well enough that the devs can keep building on it, adding areas and weapons, new angels and bosses, because the foundation is solid. It’s not the prettiest game by far, but it’s one of the most brutally addictive and mesmerising shooters I’ve ever played.

BPM: Bullets Per Minute is an addictive, innovative, and punishingly hard roguelite shooter-slash-rhythm game - and it's great