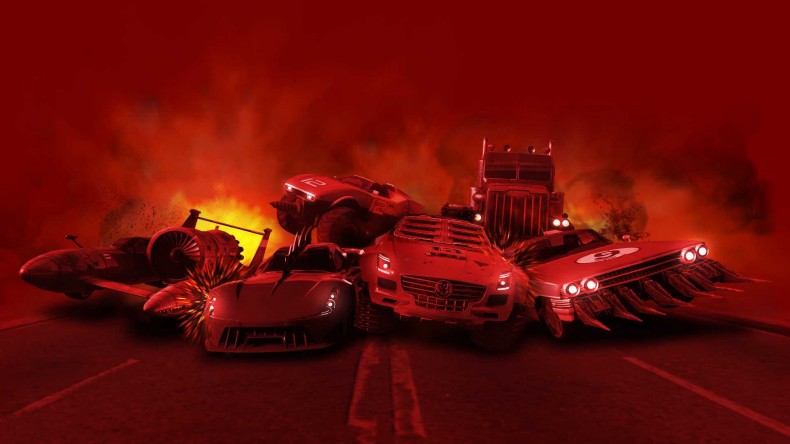 For a lot of people, myself included, playing games is a form of catharsis. Nothing is better than unwinding at the end of a long day with a spot of blasting in Call of Duty or Destiny, a bit of sightseeing with Uncharted or an hour or so of banter on Rocket League. If games didn’t have the ability to chill me out after a tough spell, I wouldn’t bother. If I’m dead honest, I get the best results from violence, which is probably because I’m such a pussycat in real life. I like to boot up a shooter or an RPG or an open world action game and go nuts, blasting and killing and swearing and generally blowing shit up. Keeps me centered, mellows my harsh. Which is why I should be forgiven for enjoying Carmageddon: Max Damage, a driving game concerned with very little other than senseless, over-the-top violence.

It’s almost as if developers Stainless Games had some kind of meter going during the making of Carmageddon to indicate its current level of taste and decency. If the needled ever spiked above “gutter”, someone probably got sacked. Essentially a re-release of PC-only Kickstarter Carmageddon: Reincarnation, Max Damage hits consoles with 40% more content and slightly improved visuals, and brings with it the deliberately inflammatory humour and Daily Mail-baiting mechanics for which the series has been known since its inception back in 1997.

The Carmageddon event is a vehicular tournament that takes place in Bleak City, and sees a group of psychotic lunatics thrashing it out for the top spot in a series of high-speed clashes in which pedestrians (here just called “peds”) are used as walking bags of bloody points. A standard race can be won in three ways: cross the finish line first, wreck all the other cars, or murder every ped in the stage. This is achieved in an increasingly mental variety of ways, from simply mowing them down to equipping mods and weapons that, for example, render them blind or inert, or cause their heads to explode as you drive past them. There’s a vacuum that draws them towards your bonnet (or hood, for our readers in the US), or giant springs that literally punch them into the air. There’s a mod that makes them explode, another that makes them move in slow motion. You can fit your car with spikes, blades, flame-throwers and massive springs that allow you to leap into the air and flatten anyone below you. After a while, you forget you’re even supposed to be racing.

No one is safe, either. In a sick form of inclusiveness, there are little old ladies and people in wheelchairs to spread across the tarmac, while the ineffective police cars who occasionally try to chase you down often cause more damage than you. Murdering civilians rewards you with points that you can spend to repair your car on the fly (which is quite cool as the various damaged parts pick themselves up and slam back onto your chassy), or use to level up, which unlocks the next trio of events. Now and then a new area will open up, such as a football field, and you’ll be prompted to ignore the checkpoints and go on a rampage, dicing cheerleaders and jocks and generally screwing up the turf. There’s a rather disturbing brothel, a construction site and a beach front, among others, for you to turn into vehicular bloodbaths should you choose. It’s all very tongue in cheek, of course, and is so deliberately, blatantly, painfully over the top that it actually bypasses “offensive” and almost becomes tame again. It’s utterly silly, but certainly not one to play in front of the kids. Even without the violence, it’s a sweary, nasty game, rewarding you with a “Took it up the arse!” medal for shunting another car, and a “Mercy Killing” badge for eviscerating a granny.

Getting wrecked doesn’t really matter, as you can correct your position at any time by pressing square, or repair your car with a double tap of triangle. However, each event contains at least one “steal-worthy” vehicle, which you can add to your garage by destroying. Initially you begin with just two drivers: Max Damage, a skinhead nutcase in a muscle car, and Die-Anna, a femme fatale in a lighter, faster model, but you can soon add a decent amount of alternatives which can also be customised with paint jobs, rims and weaponry. Sadly, all the silliness in the world can’t hide the face that it’s a fairly shoddy racing game. A technical shambles that constantly stutters and glitches, Max Damage is also incredibly difficult to actually drive in. You only have to steer round something and then attempt to correct your course to lose control, it’s almost impossible to maneuver cleverly and once the other racers start piling into you it becomes a nightmare. Hitting ramps or even clipping raised objects can see you catapulted into the air, and there’s very little precision to any of it. Which is probably the whole point.

As a result, one of the best events is the bull-pen, a contest that tasks you with reaching a number of randomly spawning checkpoints before the other racers. This event is utterly insane as all six cars will often charge a single point simultaneously, resulting in total carnage, explosions, lots of swearing and lots of laughter.

Carmageddon: Max Damage is a fairly unattractive game. There’s not a whole lot of detail to the environments, and inconsistent textures and regular pop-in mar the experience – none of which is helped by the slow down and hyperactive physics. Perhaps luckily for Stainless Games, no one is going to buy Carmageddon expecting a straight racing game to rival Forza or even Need for Speed. They’re buying it for balls-out mayhem, ultra violence, irreverent humour and, above all, catharsis. Sweet, blood-soaked, unashamedly offensive catharsis – and Carmageddon: Max Damage has all of the above in spades.

Sweet, blood-soaked, unashamedly offensive catharsis - Carmageddon: Max Damage has all of the above in spades.

Carmageddon: Max Damage announced for PS4 and Xbox One