Creature in the Well review 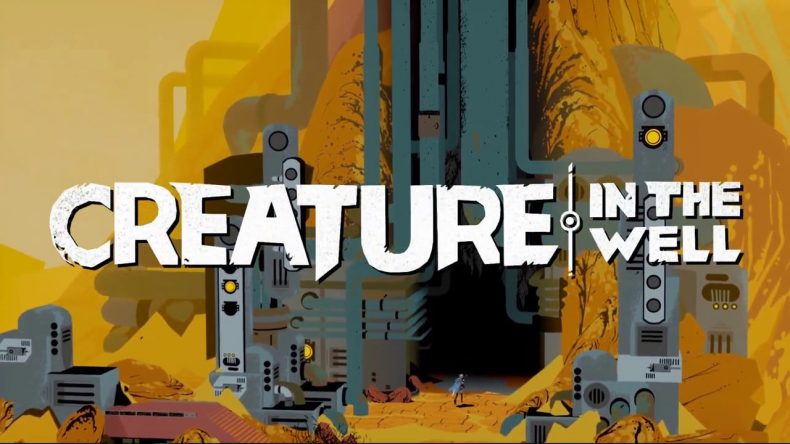 In this day and age we rumble ever onwards to a time when robots can be used to perform tasks humans believe to be too dangerous. Not necessarily powered by AI, we already see robots used for bomb disposal. In Creature in the Well you are a BOT-C engineer, one of a series of robots required to fix a large machine built into a mountain designed to keep a sandstorm away from a remote village, but, where are the people responsible for building the machine? Why are the villagers scared? There’s something amiss here and it dwells in the darkness.

As a BOT-C engineer you have to accumulate power and transfer it to capacitors throughout the machine’s workings. You do this by slashing at energy balls with a charge blade (Y) and then send them flying with a striking weapon (X); it feels like a mish-mash of pinball, baseball and bullet-hell shooter. Once you’ve struck the balls you’ll then have to read their path as they careen around the screen and send them flying back at the bumpers to keep the power charged up. Your charge blade can only handle holding three balls at a time, and after they’ve left your presence they lose power gradually if they don’t hit a bumper, so you’ll need to judge when to whaff at them with the charge blade and when to whack them with a strike. It’s a hard system to get used to, because you’ll just want to just smack everything, but if you don’t charge the energy balls first it’ll take longer to power a capacitor and some later ones have time constraints so you’ll need to think on your feet and juggle the two weapons you have effectively. You’ll need to learn quickly too, because while things start off simple enough – a bumper here, a pylon there – you’ll find things get deadly quickly and require you to be deftly fast. It starts off with guns that fire at you, collecting the balls they fire with your charge blade allows you to send them back and turn the gun harmless allowing you some breathing room to take in the task ahead of you. Later capacitors charge your energy balls with deadly energy and send them straight back at you so you’ll need to react fast and catch those before sending them off again. There are also bumpers that emit a beam in a straight line which deals damage to you, if an energy ball gets caught in the beam it’ll turn the energy deadly making you need to catch the ball again and charge it to its more harmless form.

These regular energy balls don’t do a huge amount of damage, though when there’s several of them pinging all over the place they can shave your life down pretty quickly, but they’re nothing compared to the pillars. These pillars don’t move, and don’t hurt to touch them, but if a stray ball makes contact then they expel a damaging area of effect, and this hurts. Get caught by three of these and the Creature will pick up your lifeless body and throw you back into the village. Now, of course, you shouldn’t assume that you’ll only have to put up with these dangers one at a time for the entire duration, there are many times when you’ll have to contend with many, if not all of them in a single room, and there’s a maddening pace when you’re trying to juggle all the balls and not get hurt. And get hurt you will, there’s a dash move to help get you out of trouble, and it can be used in conjunction with the charge blade in case you’re worried about losing your balls, but its range is short so don’t expect to escape if you happen to be in the epicentre when a pillar is triggered.

The Creature likes to get in on this as well, and just before you get to reactivate part of the machine it’ll challenge you to a fight over several floors of doom, it’s bony hands reaching out of the darkness throwing orange stars of death at you. You’ll either need to dodge these, or nullify them by whacking energy balls at them, all while trying to charge up nearby bumpers and capacitors to clear the floor and progress to the next. This mixes up as well, with some seeing the Creature draining bumpers of the energy your trying to inject into them and you’ll need to adjust a damage beam to put it off, and other times it’ll deliberately fire its own energy balls at pillars making you play a demented game of tennis for your life. As you progress you’ll find old deactivated robots of which you can scavenge their banners (to wear), their weapons and their cores. Different weapons have different effects like a club that slows down time briefly and a dual-blade which gives you a targeting laser, which comes in really handy as it’s extremely difficult to aim at times. But it’s the cores that you’ll really want. It took me a while to realise what exactly it is these do, and they actually increase the amount of energy you can put into a ball before release. The more energy you apply the quicker a capacitor can be charged. It would have been nice if this was communicated a little better, as the tooltip doesn’t really make this obvious.

It’s not the only thing either, while weapons state which effects they apply there’s one thing that isn’t explained at all, and that’s healing. As I stated earlier the Creature throws you back out at the village if you’re killed, and while you come back alive you now find yourself with only a sliver of health. Now, each part of the machine has a map and as you uncover it the rooms have icons stating what’s in them, and on that there’s a key that states a ‘+’ icon means you can heal there. After my first death there was no such icon, I had no idea where to heal and was trying to get past a room with this tiny health sliver. What makes this incredibly frustrating is that right at the entrance to the machine, next to a humanoid frog is a healing pool, which at no point was communicated to me as a healing pool. After my sixth or seventh death I decided to have a look around and stumbled into it purely by accident, and to say I was stunned is an understatement.

It’s fast, frenetic and a heck of a looker as well; it’s lavished with a lovely simplistic art style that conveys beautiful bright colours alongside deep black shadows, but as the camera loves to move around as you move through some of the smaller corridors it’s possible to find yourself stuck on certain items of scenery that are obscured behind foreground shadows. At least here it can’t result in a death because there’s nothing to kill you, but it’s still annoying. Everything adds up to a rather bizarre premise, but it all just works, Creature in the Well’s mechanics have been judged to just the right point between difficult, fun and maddening. It might take you a while to get into the swing of things, but when it just clicks you’ll find you can lose yourself to the rhythm for hours. On many an occasion I found myself feeling up against it, but perseverance and a timely core upgrade can see you go from zero to hero very quickly and then you’ll find yourself rolling on for ages. Just allow yourself to become part of the machine, feel all the bumpers, play clean and by intuition, and keep those wrists supple.

Gorgeous to look at
Pacey, frenetic fun
Doesn’t outstay its welcome
The right kind of hard

The Creature in the Well is a harsh mistress, but one that’s incredibly rewarding to those who push on