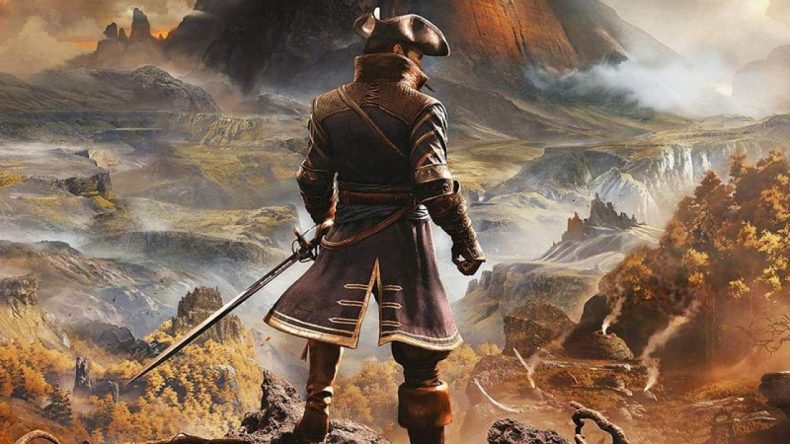 I know how to make a cake. I know what the ingredients are, and the general motions. But despite possessing a full suite of knowledge viz-a-viz the baking of confectionery, every cake I’ve ever made has been inferior to the ones my mum makes with the same ingredients. This analogy was all I could think about the whole time I’ve spent playing Greedfall.

Y’see, French outfit Spiders know exactly how to make an action RPG. They’ve been doing it for over ten years. They know the ingredients needed, they know the motions you have to go through to get from some raw eggs and flour to licking a wooden spoon clean while you watch the fruits of your labours rise through the little window in the oven door. But for some reason, after all the RPGs Spiders have produced, they still haven’t quite got the mix right.

Since Of Orcs and Men I have championed Spiders, and am still 100% sure that one day they’ll produce a veritable masterpiece. I had hoped Greedfall would be it, the one to finally put Spiders on the map. Sadly, it’s not quite that game – although it is the best thing they’ve ever produced, and not without its merit. It tells the story of Lord or Lady de Sardet, depending on your choice of gender, a young aristocrat with a mysterious heritage who must travel from their home in the city of Serene to the legendary island of Teer Fradee. The purpose is to install de Sardet’s cousin, Constantin d’Orsay, as governor and find a cure for the Malichor, an unnatural disease that has claimed countless lives.

After the initial character creation which jars you by first showing you de Sardet as a young white dude before allowing you to completely change that, you’ll choose a class archetype from three options. As usual, Spiders manage to present something that feels just a little different to the norm, even if it is a bit over-complicated. Your three choices are Warrior, Magic and Technical though you can mix and match skills from all three once you begin.

Warrior is self-explanatory, and allows you to wield heavier weapons, wear proper armour and dish out high damage on the battlefield. Magic requires you to wear special rings to channel energy, and the high volume of spells that become available give you a range of options for each fight. I went with Technical for my first and main playthrough, mixing mid-range damage and defence with bombs, guns, poisons and traps. Technical is by far the most interesting tree, in my opinion, but there’s something here to to suit anyone. As you level up you can increase de Sardet’s stats and abilities, not only improving along specific trees within your class but also unlocking and improving innate abilities like Lockpicking, Agility, Charisma and Science. With the latter you can craft bombs to break down walls or concoct sleeping potions to knock out guards and make stealth easier.

Regardless of your class, combat doesn’t ever really change all that much. Enemies tend to rush you, often relentlessly, while certain mobs will have gunmen or magicians in their midst to deal ranged and AoE damage. It’s not the most precise combat system, unfortunately. Attacks lack real weight, enemies and characters phase through one another, and there’s a floatiness to it all that undermines the variety on offer. That being said, it often feels satisfying to carve your way through enemies. A tactical pause menu allows you to queue up attacks, while you can map twelve skills at once to the face buttons and triggers, to allow for some much-needed combat diversity. At later levels you’ll be able to unlock an evasive roll, if you choose to, or bombs to throw around the battlefield, as well as various buffs and attacks that can help you develop de Sardet into a more powerful and versatile fighter. If it weren’t for a handful of performance issues and some weird AI, Greedfall’s combat would be a solid win. Along the way you will meet and recruit five characters, all of whom come with pre-baked skills and stats. You can change their gear, but not their fighting styles, and the onus is on you to take the right two with you into fights and conversations. It’s a decent cast of characters, each with their own motives and personalities. Similarly to Dragon Age, they’ll often need you to complete tasks for them which may put you in conflict with the others, or with the various factions who control Serene and Teer Fradee. There are romance options, too, of course, allowing you to woo several of them and ultimately get down and dirty, but if you piss them off enough they might turn on you completely. I managed to avoid it by basically being a fawning kiss-ass as often as required, but some of them are easy to upset.

Likewise the factions of Greedfall that control the game world, namely the Bridge Alliance, the natives of Teer Fradee, and the ruling councils of Theleme, will send you hither and thither on busywork errands until your legs fall off, and you’ll be forced to make many choices – not all of them binary – as you progress. Sooner or later, you will anger one group or another. At this point the ability to opt for stealth and diplomacy alongside combat comes in handy, as you can wear disguises, sneak, stealth attack enemies, or build up your charisma skills and talk your way out of most encounters. Honestly though, I didn’t find the conversations and forced political intrigue all that stimulating, and there are so many unlikable, inherently shifty characters that I didn’t really care who I narked off.

That said, a few of the choices do feel like they carry weight, although ironically these are the choices that split most evenly between good and evil options. Save a pair of innocent historians or turn them over to be burned for heresy, stand up to a sadistic Inquisitor who just strangled a man in front of you, or grin along with a religion that condones murder in the street. If anything, there is a bit too much talking and walking involved in keeping everyone happy. Side quests, often involving finding someone else to talk to, pop up relentlessly, and they become tedious very quickly. There’s only so many times you can force yourself to give a shit about someone’s shipment of stolen goods or someone else’s missing family member. The problem is that the side quests are just not that engaging, and as most reward you with nothing but money, they feel more like padding than anything else.

The semi-open-world nature of the Greedfall harkens back to Dragon Age: Inquisition, whereby you’ll fast travel to hub in the wild where you can explore, but upon reaching a certain point on each path will be presented with an option to travel to a different hub. This I wouldn’t mind if only there was more to find in these areas. Quite often there’s nothing to be seen but bandits, beasts or the odd mutated monstrosity to fight. Maybe a treasure chest cleverly hidden in a bush here and there. Also, after 6 or 7 hours of walking I’d have given my kingdom and my neighbour’s for a horse. You can use wagons to fast travel, or globes in cities and campfires in the wild, and before long I was skipping any actual travel because it was just dull. Remember how often you fast travelled in The Witcher 3? More than likely, not a lot, because the world was brimming with intrigue and adventure. Teer Fradee just isn’t, and it should be. I think the marketing screwed with my expectations, because upon finally leaving Serene for the island (and it takes ages), I assumed I was heading to a land shrouded in mystery, to be charted by my intrepid young heroine and her companions, so imagine my disappointment when we arrived in New Serene to find it looking exactly the same as plain old Serene. Spiders even use the same chunks of street and building fronts. And the mysterious island is, at least to begin with, mostly fields and roads. Hardly an uncharted wilderness. I mean, there are bloody road signs everywhere. I guess I was just expecting something more visually arresting and atmospheric.

If I sound like I’m being harsh, then allow me to counter it by saying that Greedfall is an ambitious title for Spiders. It’s easily their biggest game to date, and for the most part it’s well written and deep enough to warrant two or even three playthroughs – but it is rough around the edges in almost every department. It’s easily comparable to Dragon Age 2 or Mass Effect Andromeda, which sounds like a bit of an insult until you consider that Spiders have neither EA’s financial backing nor BioWare’s RPG pedigree. Bound by Flame, Mars War Logs and The Technomancer are all evoked by Greedfall’s world and systems, and for this reason it feels like a true progression despite it being a new IP.

Greedfall has its issues, that’s certain, but they’re issues born from perhaps too much ambition as opposed to a lack thereof. For every enemy whose AI resets because you moved to far away from a set area during a fight, there’s a new outfit to modify or spell to learn. For every janky cutscene or out of place regional accent, there’s a snippet of lore to be found that fleshes out the 17th-century-like seafaring world Spiders have created. And the heart, the sheer heart, that has gone into making it balances out many of the minor annoyances and quirks that might have proved the downfall of a less passionate development team. Greedfall is saved by its story, which may not be hugely original, but mixes maritime adventure with the mythical Elven intrigue of something like the Witcher to produce a plot that would quite easily whisk you off if only the much less interesting side quests would get out of the way. While combat may be a little loose, it’s also a lot of fun, giving de Sardet a ton of options for every encounter – or indeed for avoiding every encounter if that’s how you want to play. And the characters are a boon, with loyal Kurt and the difficult-to-trust Petrus being stand-outs for me, purely because I wasn’t ever sure where their stories were going.

In aiming for bigger, Spiders have left themselves open to the trips and traps of all open-world RPGs, trying to fill the sudden space and resorting to obvious padding to keep you interested. Ironically, had they focused Greedfall into a story-driven RPG with half the side content, I’d have probably been left wanting more. As it is, I found myself ditching all but the companion side quests just to get through the story and make things happen, and that’s never a good sign.

But what I will commend Spiders for, as always, is their ambition and ability to innovate in small ways every game. Greedfall struggles to find its feet and then maintain them, certainly, but it also presents a mostly enjoyable adventure that gets better as you go, opening up the secrets of Teer Fradee in some surprising ways. Once again, Spiders have surpassed what they’ve delivered before and, despite its flaws, Greedfall is easily their biggest and best game yet.

Greedfall is held back by performance issues and a tendency to fill its space with tedious padding, but it’s saved by fun combat and an intriguing story.