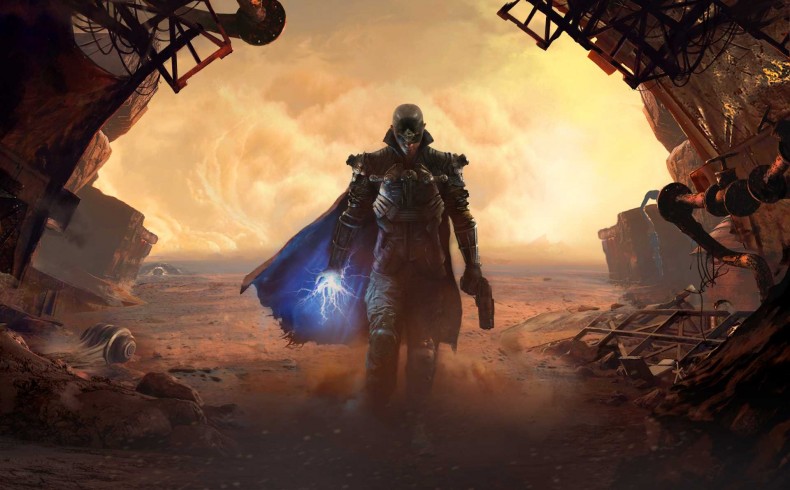 Spiders is a studio with potential. That’s not just a tired old line I unpack every time I review one of their games, it’s a statement of fact. Unfortunately, it’s one that’s getting increasingly harder to back up with any concrete evidence. After a promising start with Of Orcs and Men and the endearingly mis-firing Bound by Flame, Spiders abandoned fantasy (at least as far as RPGs are concerned) and instead began to look towards the stars.

With Mars War Logs, a downloadable-only last-gen title, the studio ventured into sci-fi territory to deliver an ambitious yet ultimately underwhelming adventure. Now, a few years older and a little wiser, they’ve returned to the same universe to bring us The Technomancer, a game that strives to be part-Mass Effect and part-Dragon Age: Inquisition, but which fails to live up to the standards of either despite some decent ideas and some earnest attempts at world-building.

The story takes place in the distant future, decades after mankind first colonised Mars. Your character Zachariah is a Technomancer, a type of mutant able to harness bio-electricity and turn it into a self-replenishing weapon. The process is dangerous, often resulting in permanent injury or death, and Technomancers must learn to control their power and channel it through specially-crafted gloves. This being a tale told of Mars, of course, means there are other mutants with less flashy and convenient divergences. They’re your average Total Recall-style, Sloth-from-the-Goonies-looking freaks, and as such display little to no imagination on the developer’s part. Once you’re though the character creation screen, which is largely pointless since all you can change is Zachariah’s facial appearance (no lady Technomancer options for some reason, although you meet some later), you’re thrown into an initiation mission and let in on the great secret of the Order, a secret you’re charged to protect with your life. It isn’t long before things go arse-up and you’re fleeing the merchant city of Ophir with a ragtag band of allies in search of your Destiny (with a capital D). If it sounds trite, that’s because it is. It’s all been done hundreds of times before with different settings and backgrounds and characters, and as a result it simply fails to hook you in any meaningful way.

The Technomancer is a game of browns and greys, and not just aesthetically-speaking. Despite efforts to make the cities feel alive, the NPC AI is extremely shoddy. People walk around without tangible purpose, or stand alone gesticulating wildly as though deep in conversation with an imaginary friend. They shriek when you fight around them, but don’t run away, and return to exactly what they were doing when the fighting stops as though nothing happened. Sometimes you’ll find them just milling around stuck on scenery or locked in a weird circular walk. After a while, the vast swathes of emptiness between them actually becomes something of a relief.

If there’s a true saving grace, it’s the combat. While nothing award-worthy, The Technomancer’s melee is responsive, dynamic and malleable. Three combat styles are permanently accessible depending on which weapon you draw: staff for the Warrior style, mace and shield for Guardian, dagger and pistol for Rogue. The fourth style is the ability to employ the powers of your Order and electrocute your enemies, imbue your weapon with electricity or create shields to absorb damage. Every level gained gives you a point to spend in any discipline, and you can generalise or specialise without real penalty, though it’s better to do the latter for obvious reasons. Combat is in real time and a mixture of offence, evasion, interruption and AoE (area of effect) attacks. The Guardian style allows you to block, the Rogue style is faster, and the Warrior stance is brutal and fluid. Combat works very well, to be totally fair, although a relatively small roster of enemies means you won’t be forced to modify your tactics very often. The trio of upgrade trees seems over-complicated, too, as you’re periodically given points to improve any of five attributes, or to increase skills like lockpicking, crafting, science, and charisma. It all could have been one tree, really.

The latter three skills help in conversations, where you may be able to intimidate or persuade NPCs to see things your way, or even employ your knowledge of science and engineering to influence dialogue. Again, it’s lifted wholeheartedly from other games and doesn’t offer anything new, especially when conversations are so limited and it’s so easy to reach a point where you can’t fail at an attempt because the required skill is so high.

Your companions can provide advice and side-quests, but it’s hard to invest in any of them because they’re either cliched or in some way unlikeable. One or two offer interesting angles, such as mutant Phobos who initially acts dumb but reveals hidden layers to his character, or Andrew, a fellow Technomancer who lost his arm in a freak accident and wants to regain his former standing. The script is iffy at best though, never quite sure whether it wants to emulate Star Wars at its lowest point or throw slang and foul language around instead, but the voice actors do the best they can with what they have. Whoever wrote the disjointed speech pattern of the group’s slightly senile doctor, Scott, needs a severe talking to. I’m not sure what they were aiming for, but whatever it is, they miss, and listening to him is nothing short of a chore. Elsewhere, Spiders attempt to inject some variety with the crafting system, which would work brilliantly if gear wasn’t so thin on the ground. Yes, there’s lots of it, but you’ll constantly pick up the same items of clothing over and over again and, as you can’t adjust the attributes of your party members in any way, most of it will go unused if they can’t already wear it. Using a workbench lets you adapt your gear by fitting upgrades to the slots, adding shoulder pads to armour or blades to staves, for example, but again it’s a system that hints at a greater potential and doesn’t ever go far enough to realise it. Everything is grey and brown with a little black and dark green thrown in, and you’ll soon get sick of all your gear looking more or less the same.

Somewhere below The Technomancer’s drab grey and brown sand is a solid action-RPG, but it’s buried deep beneath dull player characters, cliched NPCs, boring busy-work missions and a general lack of imagination or identity. The universe has room for lore and backstory, the occasional trips outside the cities hint at a grander Mars that you simply don’t get to explore properly, and the mutated wildlife suggests a mix of enemies and peril that you’re never shown through a clear lens. Instead, what you get is a lifeless, by-the-numbers adventure that never manages to feel like you’ve left the tutorial behind.

There’s one moment mid-game that I won’t spoil other than to say that it’s of such magnitude in the context of the universe that it deserves its own questline, but instead the entire event boils down to a handful of minute-long missions and a single line of dialogue to congratulate your achievement. It’s poor storytelling and poorer RPG design that just doesn’t cut it in a generation that has already seen Dragon Age: Inquisition and The Witcher 3. Yes, Spiders still has potential, but don’t seem to be able to do anything with it. In the end, The Technomancer, like Bound by Flame before it, tries to be too much like the genre leaders instead of finding its own way, and ends up falling way short of the mark.

The Technomancer, like Bound by Flame before it, tries to be too much like the genre leaders instead of finding its own way, and ends up falling short of the mark.

Learn how to make friends with The Technomancer Companions trailer