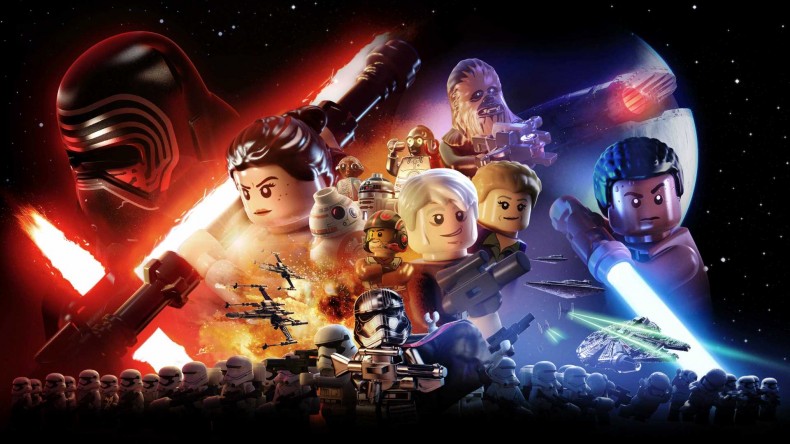 You know the drill by now, right? I feel at this point it’s almost pointless trying to pretend otherwise, because the LEGO games have followed a hugely successful formula now a decade now, iterating on popular, culturally significant properties, aimed at adults and children alike. Slowly but surely the minutia has changed, but that formula has largely stayed the same, unless you count LEGO Dimensions (which I thought was superb) and LEGO City Undercover (which was genuinely funny, but suffered from technical issues).

It feels quite strange, actually, coming back to the game that kickstarted the love affair with this series for us game playing folks. LEGO Star Wars was the first game most of us played and loved, and I’ve been heavily critical of the amount of games that have been made with that “LEGO” prefix (almost as annoying as having to capitalise LEGO every time), especially when you get single movies getting their own game, as opposed to the situation with a series like Harry Potter, where six films were dolled out over two games. With that all in mind, it’s in the back of my head that people will be reading this to find out what’s new for The Force Awakens (there are new bits), and which games are my favourites (Dimensions, Harry Potter, Star Wars – in that order) so they can check the score and judge if this is for them. Firstly then, what’s new? The most surprising new addition is the cover shooting sections. Yes, you read that right, and no, I’m not taking the mick. Pre-defined sections will have cover you hide behind, whereby you hold the left trigger to pop out, and then hammer square (PS4) or right trigger to fire. You can move the reticule if you want, but otherwise it’ll auto-lock to the nearest enemy. These are quite cool, in fairness, but like much of the series, because there’s no penalty for death (save losing some studs, that is) they aren’t quite as exciting as they could be, despite trying to change it up ever so slightly with different character’s skills. It is an issue for people wanting a challenge, but if that’s why you’re here, you picked the wrong game.

Next, certain builds are now called “Multi-builds” and let you choose from a few different things to create. Most of these are supposed to be done in a certain order. For example: a three piece water puzzle is solved by creating part one of the multi-build, blowing it back up, moving to part two, blowing it up, then moving to the final part and finishing the puzzle. It’s rudimentary and will be more fun for kids than adults, but it’s a nice idea. More interesting, though, is that often one of the build options seems unnecessary, and that’s because it’ll lead to a hidden red brick, or another secret. Part of the prologue is playing out the final moments of Return of the Jedi (it acts as a tutorial), and at first it seems odd to be playing the old films in this new game, but flying around in the Millennium Falcon is a nice distraction, even if it’s a little squirrely to control. Before each story level there are mini hub worlds which you can muck around in, or choose to replay levels in free-play (and thus access secrets with non story-level characters as per usual). Obviously in an effort to not short change you, the story is stretched over multiple levels, but it’s done quite cleverly. The first stage sees Poe Dameron help the people of Jakku to find their weapons caches so they can attempt to fight back against The First Order, and the second is about Poe and Finn’s escape. Likewise, when Rey finds the lightsaber there’s a puzzle to solve before the story continues. There are also levels that aren’t from the movie which are unlocked with gold bricks and show the lead up to the story of The Force Awakens. Whichever way you look at it, this is a good value proposition, with the usual high number of collectibles, characters, gold bricks, red bricks, and more to find before you can honestly say you’ve done everything there is to do.

The main issue here is that the new stuff is leaned on too heavily. The cover shooting sections are used in nearly every level, and after the first few times the cracks start to show, with the imprecise nature of the controls for older players at odds with the locking on for the younger audience. By the halfway point of the story you’ve experienced enough vehicle sections, too, and while they make sense in the story context, from a gameplay perspective you almost want to get back to the good old fashioned LEGO fun.

But what is here is a good time, and its amplified by co-op as usual. I’ve never gotten on with the dynamic split screen so switching back to a vertical split is a godsend. While The Force Awakens does feel a little more geared toward solo play (sometimes during co-op the partner will be sat waiting for the character with the required skill to unlock a path) it’s enjoyable nonetheless. The character skills feel like they make sense, here, with Rey beginning as a melee fighter with great agility, BB8 able to interact with machinery and power objects, etc.

It looks great, of course, and while the audio is typical Star Wars fare, there does appear to be some inconsistencies with the voiceover audio. While some voice actors have added their words to additional dialogue for the game, the quality seems to vary. I can’t quite put my finger on what it is, but there’s a definite difference in the audio production in places. Whether that’s just a case of some being directly ripped from the film and some being new, I’m not sure, but it’s not really bad, just noticeable if you’ve a good ear.

So while it doesn’t reinvent the wheel, The Force Awakens is a surprising time sink. Each level is hefty enough if you’re the type who likes to get “True Jedi” ranking, and as usual, there is reason to replay each level to unlock all the hidden stuff. What could have been a quick and easy cash grab is another LEGO game fit to burst with content, and one that actually strives to make a more modern feeling product. While it’s not going to change your mind one way or another, often there are two types of LEGO game, and thankfully this firmly falls into the “good” pile.

While it's not going to change your mind one way or another, often there are two types of LEGO game, and thankfully this firmly falls into the "good" pile.

You may also like
legolego star wars: the force awakensPC