previous
Lumberhill review
random
next
Ender Lilies: Quietus of the Knights review
1 like 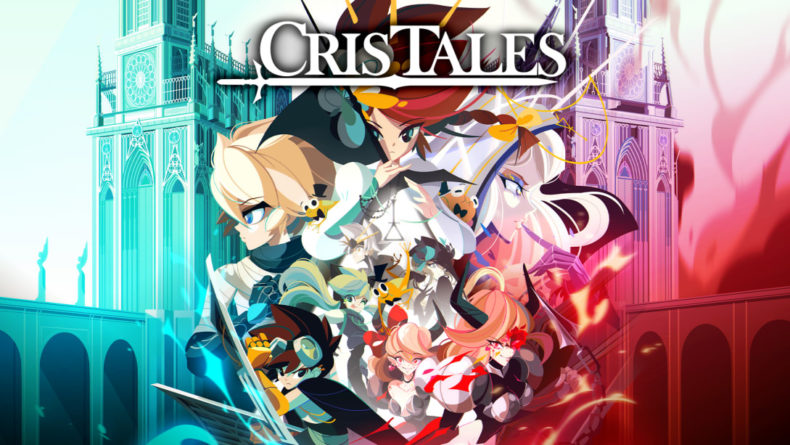 Throughout history, there are countless pieces of fiction focused around time travel. Whether it’s a H. G. Wells classic or Back to the Future, this sci-fi staple has been fascinating people for decades. We’ve probably all wanted to have power over time before, whether you’d use it to win the lottery or say something hilarious you thought of too late. Cris Tales uses time powers in some really clever ways, making for a thrilling JRPG inspired adventure.

Crisbell leads a simple small town life, helping out Mother Superior with chores. This all changes when a frog in a top hat hops into her life and awakens her time powers. It turns out Crisbell is a powerful time mage, with the powerful ability to look forward or back in time and change the flow time at will. When seeing into the future, it doesn’t take our heroine long to notice the destruction and disrepair of the world. Being the kind hearted lass that she is, Crisbell decides to try and change this by exploring her new powers and taking on a huge threat with the help of a few friends.

When walking around the world, the screen in Cris Tales is split into three sections. On the right you can see into the future, the middle is the present and the left is the past. Thanks to these time powers you’ll have a great insight into the history of the environments and people you meet on your journey. Decorations change, entire towns crumble, and lives pass by as you walk from right to left. It’s a visual spectacle that really makes the world come to life. 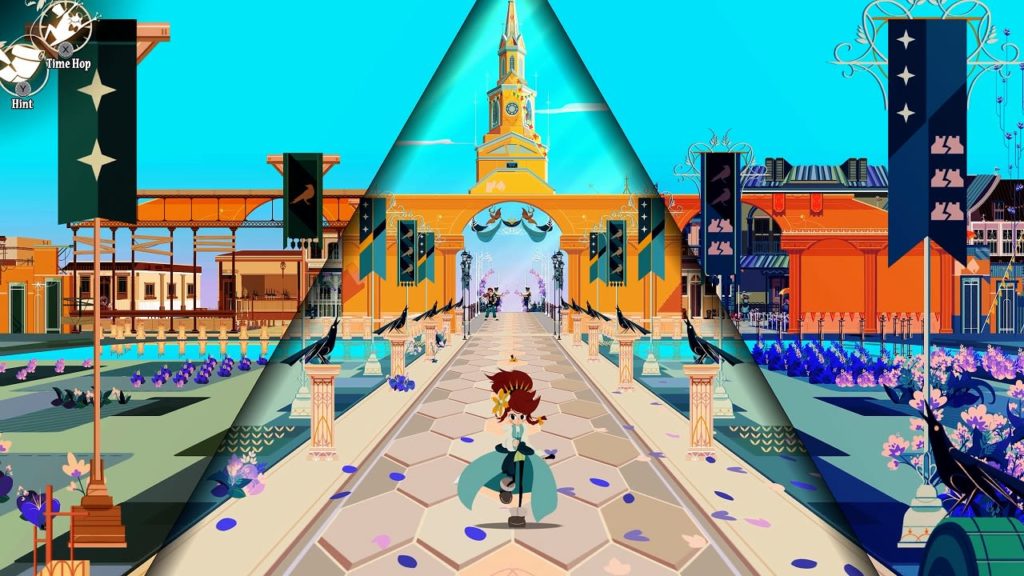 Fortunately for the people of this time bending world your powers aren’t limited to looking at past and future scenes. With the help of Mattias (the top hat frog) you can go back and forward in time to collect items for the present. Maybe a workman has lost his tools but had them in the past, or you need an invention that hasn’t been completed in the present.

Your actions will also sometimes change the future you see on the right. Donating money to a street musician could mean he follows his dreams and becomes famous, or giving a youngster some good advice might mean he one day leads the town to prosperity. It’s really nice to be able to see the effects of your actions instantly, without having to wait and see what changes later.

As fun as time powers are as you walk around towns and cities, using them in battle is even better. Enemies can be sent back or forward in time, which often changes them entirely. A huge snarling beast can be rewound into a cute little kitty, or a mighty warrior can be aged into his less threatening years. Cris Tales really rewards experimentation with your powers, and they’ll help you survive many a random encounter. 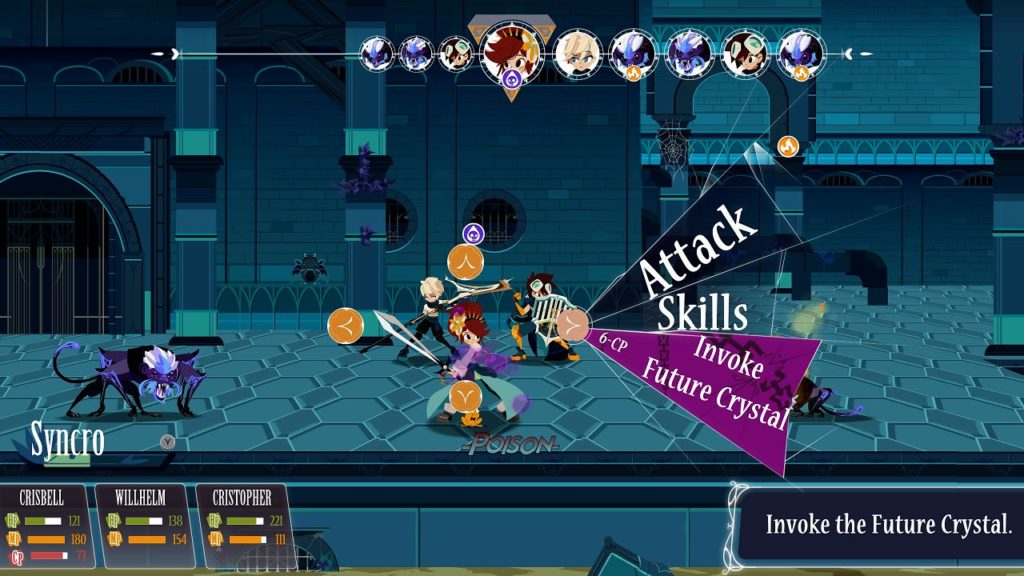 My favourite way that time powers work in battle is with status effects. If you poison or burn a foe it’ll take damage every turn, but send it into the Future and it’ll take all that damage at once. You could also use a water attack on a metallic knight, then fast forward to rust their armour and lower their defence. I loved finding new ways to use time to take down enemies, and in boss battles it’s practically compulsory.

Alongside awesome time mechanics, battles have plenty of other interesting elements. When attacking or defending from an attack, a timely press of the A button will boost or reduce damage like in a Mario RPG. It really helps keep the battles more engaging, especially when the random encounters pile up. 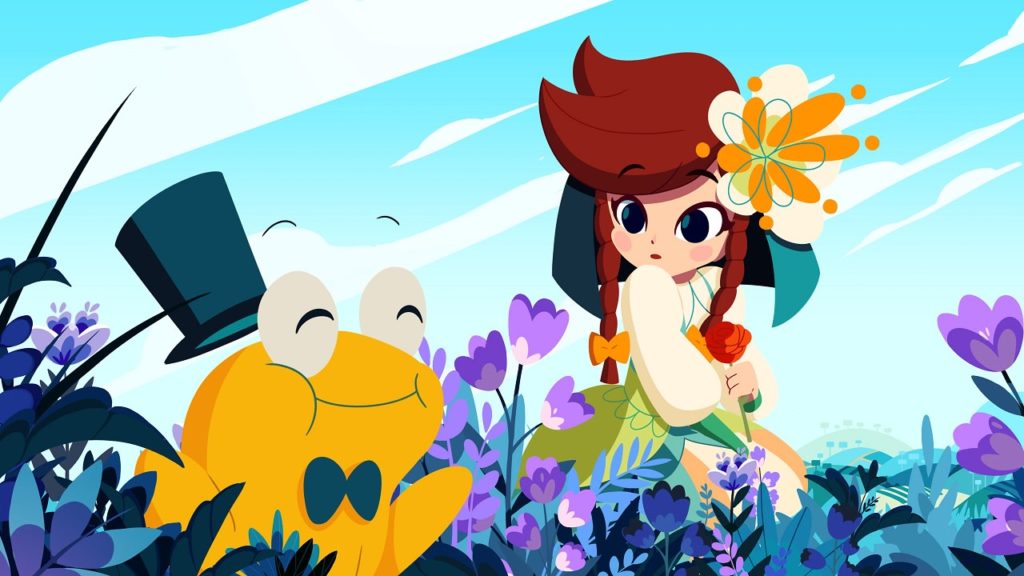 There are plenty of other standard JRPG trappings to get stuck into as well. Different party members (all with new time buffable abilities to experiment with), equipment and leveling up all make an appearance. Few of these more standard systems are particularly unique, but it’s as engaging as ever when you learn a new skill or meet a new party member.

It’s definitely worth mentioning that Cris Tales is one of the best looking games I’ve played this year. The visuals blend eastern and western styles to create a truly unique look, with gorgeous character designs and jaw dropping environments with multiple 2D layers. Some of the particularly stunning vistas you find (split into three different time periods) could easily hang on a wall and impress your friends.

Play it, but maybe not on Switch

My only real issues with Cris Tales stem from the hardware I played it on. The Switch version of the game is a significant downgrade from the others in terms of performance. There are some moderate framerate issues in more taxing areas, but the biggest issue is the load times. Random encounters take so long to load in, adding so much to the frustration that the RPG staple already brings. It takes around 10-20 seconds to load in and out of each fight, and it’s just not acceptable. It’s such a shame that these issues are so severe, because otherwise the Switch would be the ideal way to play the game.

Cris Tales is a refreshing and unique take on the JRPG. It mixes new and exciting ideas with staples of the genre with fantastic results. Using Crisbell’s time powers in and out of battle is truly rewarding, and the timing based combat is engaging. It’s a real shame that the Switch version of the game has some huge issues. Otherwise, this gorgeous game is so good that I still played 20 hours of it in 2 days regardless.

Cris Tales is an incredible take on the JRPG with impressive time powers, but the loading times and framerate on Switch are disappointing.