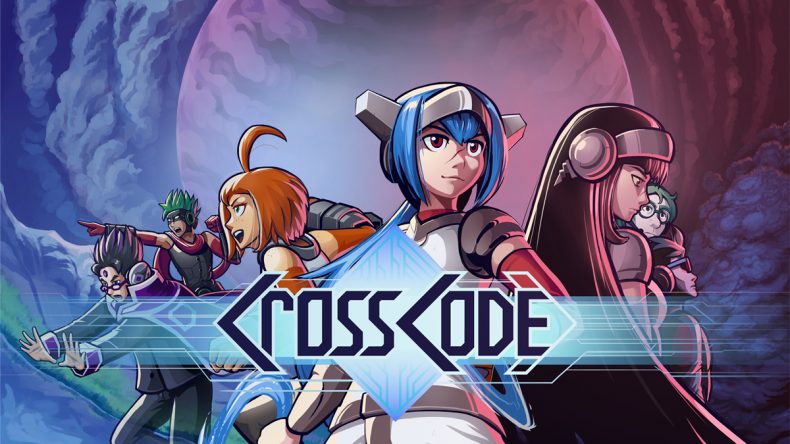 I’ve never gotten hugely invested in an MMO in all my years playing games. I do understand the appeal of interacting with other players, joining guilds and raiding dungeons, but dedicating years of my life to such a single time stealing game is never going to happen. With a fictional MMO as the setting, CrossCode brings some of that multiplayer flavour to a single player RPG I can actually get to the end of.

In the online universe of CrossWorlds you play as Lea, a character in the MMO with an unknown past and no memory of previous playthroughs. Crossworlds isn’t a virtual game though, and players control an Avatar in a physical world and can feel anything their character feels. Lea doesn’t have a player, but must make her way through the game without anyone noticing this fact in order to regain her memory. The fictional MMO setting means you’ll be following two plots, the in-game story and the real world mystery, and both are equally engaging. Lea’s character class in CrossWorlds is a Spheromancer, a ball throwing warrior with twin blades for close up confrontations. Combat is incredibly satisfying with these melee and ranged attack options, and you’ll need to switch between weapons on the fly to take on the variety of foes in your path. There’s a huge emphasis on dodging and blocking incoming attacks too, and if you don’t make the most of Lea’s defensive capabilities you wont survive the tougher enemies. As you progress further on your adventure, you’ll need to take advantage of stunning enemies when they’re vulnerable, utilise your special abilities, and switch elements to deal extra damage. The complexity builds at a gradual pace, and after a few hours you’ll have mastered a plethora of skills.

Your abilities aren’t just used to defeat the variety of critters and robots in your path. Throughout your quest you’ll be tasked with making your way through instance dungeons, packed full of puzzles and pitfalls to navigate. They’re reminiscent of a Zelda dungeon, with locked key doors, sliding block puzzles and boss rooms at the end. Some of the trials can be overcome by bouncing your ball attack off surfaces, but others will require the use an the element you’ll find in the instance. Obtaining a new element, and realising it can be used to traverse an obstacle you’ve seen before is always exciting, and using your new tool in combat is almost always important for the next boss.

Between dungeons you have plenty of side quests to keep you busy. There are all sorts of extra tasks to work towards. From simple resource gathering to extra hard enemies, these objectives often have a focus on exploration of the large environments. These outdoor areas are simply gorgeous, with weather effects only adding to the beauty of this pixelized world. Despite the top down perspective there’s a real sense of verticality in CrossCode, and I loved jumping from cliff to cliff looking for that last illusive monster claw. Completing side quests never feels like a grind either, in part thanks to the incredible sound track, but also due to the almost instantaneous fast travel, that means zooming back and forth to quest givers never feels like a slog.

It’s important you keep up with these side quests, because CrossCode is a very challenging game by default. You’ll need every piece of equipment and point of experience you can find to keep on top of your foes. Leveling up gives you points to spend in your Circuit Grid, where you can unlock stat boosts, combat buffs and even new attacks. Like in any good MMO, you have the ability to respec your Circuit Grid for a price.

It never feels like you’re the only person grinding away and leveling up in CrossWorlds, with plenty of NPC “players” darting around the world to objectives, while talking to their friends about how much they’re enjoying the game. Standing around a quest giver with ten other people, and all collecting an item once he’s done really adds to the MMO feel of the game. Alongside these more passive inhabitants of CrossWorlds, you’ll also make friends with a variety of people who you can invite to your party to help with combat. These players come from all corners of the world, and there’s a relatable global flavour to the multiplayer fantasy. Although you won’t need to dedicate all your free time to this “MMO” experience, CrossCode is packed with almost as much content as an actual online RPG. Without getting too deep into every aspect of the game, you’ll be able to sink time into crafting, cooking, and farming materials by maxing your combo meter. There’s so much to do, and it’ll take you at least 40 hours to wrap up Lea’s adventure. I enjoyed every minute of it.

The only issue I had with the Switch version of the game is a significant framerate drop in the busy town hub areas. Although this doesn’t ever disrupt the combat (as there is none in town) it’s a little annoying when you’re exploring every corner of a new location looking for quests. These framerate issues aren’t present in the PS4 version, so if you don’t mind sacrificing the handheld play it’s the superior option.

CrossCode is an incredible experience from start to finish. The MMO setting is phenomenally realised, and despite being lengthy, it never wastes your time. With deep and fast paced combat, thoughtfully designed puzzles, and all the charm of the top down Zelda games it’s reminiscent of, I haven’t been so gripped by a game in years; so much so, that I’m planning on buying the physical version despite having access to it an every console. I adore this game.

The frame rate in towns is subpar on the Switch

An incredible adventure from start to finish, CrossCode is a fictional MMO where the charm is anything but. With enthralling combat, intriguing puzzles and hours of enjoyable content, I cannot recommend this game enough.