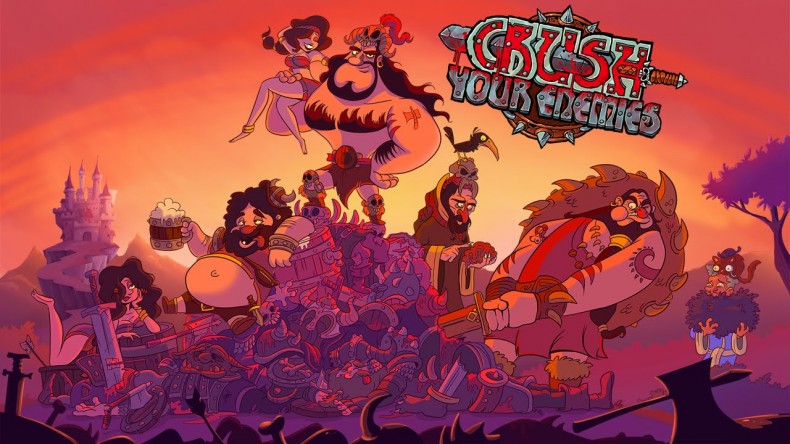 It’s rare to see the RTS genre dip its toes into a simplistic and humorous pool, opting for more streamlined experiences over pages of menus and countless choices. With frequent dick and fart jokes, vulgarity and basic gameplay, does Crush Your Enemies go too far and try to offend instead of provide a solid strategy game? It may not be the greatest of games, but it’s funny and sometimes that’s just what you need. Crush Your Enemies is all about Brog, his fat, drunk son Fuzgut and a group of barbarians as they gain control of their enemy’s strongholds, using simple tactics to quite literally crush them. Each stage has specific objectives like finishing in less than 3 minutes or keeping a certain number of barbarians alive. By meeting these expectations, you’ll earn respect points; the more respect points you earn, the further you’ll progress. After a while, it gets old fast and the variety of each stage stops dead in its tracks, forcing Crush Your Enemies to rely on the humour of the script to carry it along, instead of its gameplay.

The fundamentals of battle consist of moving your barbarians to attack, destroying your opponent’s buildings and retaking their land. You can control pockets of up to 50 barbarians at a time and with a left click of the mouse, you can complete the orders you give to your men. All of your barbarians start off as simpletons until you train them up in one of the different huts, allowing them to learn a specific profession like archer, wizard and warrior. It happens almost instantaneously, so you’re not waiting for ages and learning these will give you the edge in battle; in fact, not learning one of these professions will more than likely end in your failure. Destroying the buildings of your enemies will stop them multiplying, and knowing whether to do this first or attack the main army will be your biggest decision (and one of very few you’ll have to make). There isn’t a lot to do on the battlefield other than attacking and reclaiming land and strongholds and there isn’t much to do outside of this. It’s a nice throwback to old games, but it won’t keep you interested for long.

It isn’t particularly tough to complete the stages but as you progress, the AI can overpower you through no fault of your own. In later stages, the enemies have more fighters to start with than you and better advantages on the battlefield, so no matter where you are located or what you have to do, you’re already off to a bad start. Throughout the game, you’ll earn beer and this can be used to get perks for your barbarians, but they don’t last long and don’t really give you the best advantage. Listening to Brog and Fuzgut’s banter is easily Crush Your Enemies’ best feature. If you’re an immature adult like me, the constant use of words like ‘gobshite’ and ‘fannylicker’ will make you laugh. It’s not big and it’s not clever, but it is a prime example of game that isn’t taking itself too seriously. There are some great acknowledgements of gaming tropes and current social trends, and the British humour is much appreciated. Even the loading screens are a thing of glory; instead of the word ‘loading’ appearing, phrases such as ‘shaving bollocks’, ‘writing offensive tweets’ and ‘oiling pecs’ pop up, providing a giggle here and there.

After you’ve done with the main game or even if you fancy a break, the multiplayer is there to break up the frustrations found in the main game by offering fights with other gamers around the world. It can take a while to find a match, but by fighting someone else takes away the advantages the AI often has in the main game. If you want an RTS like XCOM or The Banner Saga, look elsewhere. Crush Your Enemies is nowhere near as time consuming or as good, but it does give you a few laughs and the fast-paced strategy it offers will steal a few hours of your time.

Humour is revoltingly fun
Fast-paced and easy to play

Crush Your Enemies is an RTS that’ll hold your attention for a little while, with toilet humour you’ll either appreciate or hate, but there are plenty of better games in the genre already on the market.