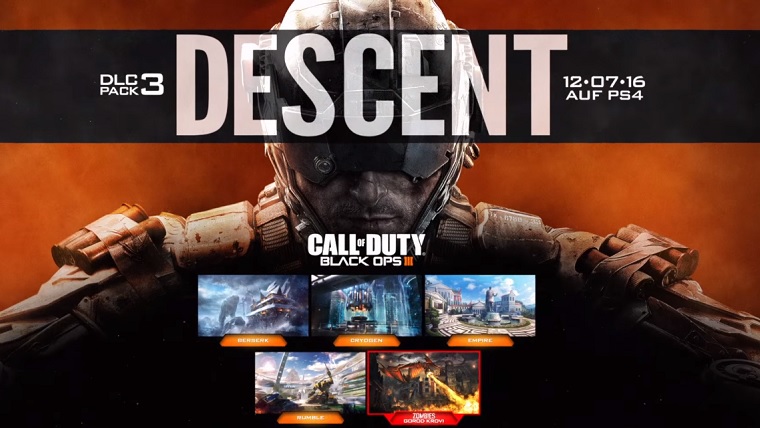 So we are on to the third instalment of Treyarch’s DLC schedule for new content for Black Ops III. This time the pack is called Descent and once again, features four new multiplayer maps as well as a dedicated Zombies map. As with both previous DLC, one of the new multiplayer maps features a remake of a classic from a former Treyarch game. In this case it is a remake of Raid from Black Ops II.

The new content is certainly competent and a couple of the maps really provide an impressive arena, but overall it feels a little less exciting that the previous two packs. Rumble is set in an arena for huge robot vehicles with concession stands and arena access. One of the smaller maps in the DLC, it is completely symmetrical with only some very minor differences in the actual arena section where the huge robots are stationed. There are a few nice touches in the map, for example in the bathrooms that are at both sides of the map, you can hear toilets flushing which gives the impression of something more dynamic than the completely lifeless robots in the middle suggest.

Rumble is pretty small with very little opportunity for wall running, the only verticality that is really provided is an underground tunnel that connects both sides of the map with the centre of the arena. Also unusually for a Treyarch map, it only really features two main lanes for the action. Visually, it is one of the least interesting maps in the DLC despite the presence of the huge mechanoids. Cryogen is set in a cryogenic detainment facility and overall is another visually disappointing map with an asymmetrical design. In terms of first impressions I got a strong Bio Lab vibe — a map from Advanced Warfare, the Infinity Ward-developed Call of Duty released in 2014.

It is a fairly large map with one side providing lots of verticality and medium to long lines of sight but it’s also the least interesting part of the map. The other side runs through the cryogenic facility itself with some tighter corridors and multiple ways to get to the same point. There is also some candid sights, with the huge cryogenic cylinders containing hundreds of human prisoners.

Unlike Rumble, Cryogen offers many more opportunities for utilising the movement style that defines Black Ops 3 with some high risk wall running areas that take you on the very outskirts of the defined map area. Both the outside portion of the map and those huge cryogenic cell pods will be very useful for objective based modes to get the drop on the other team. Beserk is set in an ancient Viking village which looks to have been the scene of a very recent and very bloody battle. It is perhaps the most striking of the new maps, and was the one I was most anticipating. Visually it is really pretty, with some great vistas of the mountains and sea from the playable area — at certain points in the map you can also hear wolves howling into the snow from the pine trees in the distance.

Structurally the map is asymmetrical again with some really odd routes through very narrow, cramped areas in the many buildings and a huge wall running area underneath the main playable section which runs from top to bottom of the map. I don’t normally play Domination, but I tried a game with bots just to get a base idea of where the points are situated and how the flow of engagements might go and oddly, each point seems to be situated towards the top end of the map rather than right through the middle which is more common.

Beserk is a medium to large map which more directly follows the Treyarch blueprint of three lanes of attack. There isn’t much scope within the architecture of the buildings for wall running, however there is that huge area that splits the map from the centre to the bottom area where players can wall run under a bridge to get to either side. Empire is a re-imagining of Raid from Black Ops II, and the development team have done a really great job. Visually, it is gorgeous with fantastic views of the Tuscan countryside and sumptuous detailing of the Romanesque complex. The structure of Empire is exactly the same as Raid, and will be very familiar to players who spent many hours with Black Ops II multiplayer. There have been some changes to accommodate the core movement, but wall running is limited.

One key thing I noticed while playing the map is that the speed of the movement in Black Ops III has meant that some of the areas that were popular in Raid are very heavy traffic areas indeed which could become very frustrating. Empire is a great remake of a popular map, however I do have some issues with it in that the bright colours used, certainly within the enclosed spaces, make it exceptionally difficult to spot enemy players, particularly if those players are sporting brightly coloured armour. On several occasions, players seemed to blend in to the background and were almost invisible. The speed of the play contributes to this. As mentioned in the previous two other reviews of Black Ops III DLC I don’t play a lot of the Zombies mode, however Descent delivers in this area again with a very good map – Gorod Kovi, set in an alternate Stalingrad. The original cast feature again, which is a shame because still no Jeff Goldblum, and there are lots of secrets to uncover which will keep fans of this mode busy for some time.

Overall, Descent feels a bit of a disappointment. Cryogen and, in particular, Rumble are a little bland. Empire is an exceptional remake, but I question whether it will work with the faster movement of Black Ops III and I really feel that some players will struggle with the colour palette enabling player camos to blend in to the background. Beserk is the most interesting map, but in my time with the new DLC maps, players did not vote it in very often. Only time will tell whether it will become a fan favourite or not. The Gorod Kovi map does save the pack a little, but for players like myself that don’t play a lot of Zombies, there is very little reason to recommend Descent for non-season pass holders.

Review code provided by publisher. You can support us by purchasing using the following links:
Liked it? Take a second to support GodisaGeek.com on Patreon!

Descent feels a little bit of a disappointment. Two maps are fairly bland, with Beserk being the most interesting, and Empire while being a fantastic remake of Raid, doesn't suit the speed and core movement.

You may also like
ActivisionCall of Duty Black Ops 3PC