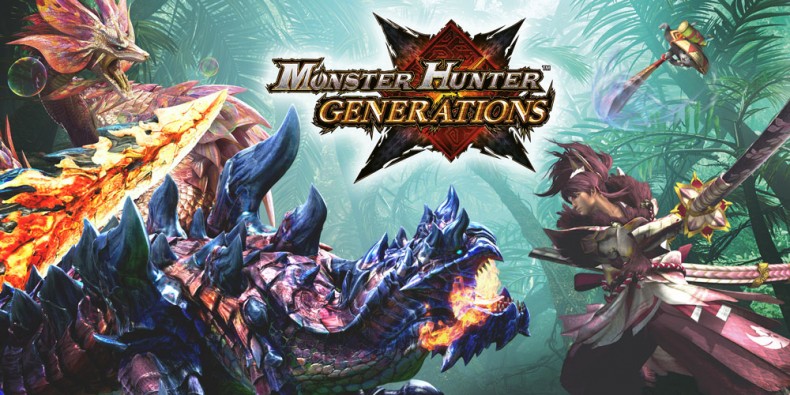 Monster Hunter Generations is a beast of a game, both in appeal and size; although the hunts can be punishing and time-consuming, the thrill of slaying one of the game’s many monsters makes the grinding and effort totally worth it. As a newcomer to the series, it’s a perfect entry that gives you many tools to hunt with as well as advantages through special moves and buffs, whilst at the same time providing one hell of a challenge. You start off as a stranger, heading off into the world of Monster Hunter with great ambitions to be the best hunter ever. One of the most refreshing things about your character is that you start with zero abilities; it’s not your character that has levels to build upon, but the weapons and armour you buy and forge throughout the game. Killing a monster and harvesting its corpse gives you materials to create new stuff, allowing your creations to act as reminders of your conquests.

As for monster battles themselves, they can be both gratifying and tedious depending on how patient you are. Getting to these fights takes a bit of time as you’re asked to take on the menial and dull fetch quests preceding them, but when you come up against the monsters in Generations, it becomes a much better affair. Whether you’re new to the series like me or not, most of the monsters prove a challenge. The Great Maccao uses its tail like a caveman’s club and will charge right at you, giving you a split second to either dodge or strike, and the Drilltusk Tetsucabra uses its massive tusks and gargantuan boulders to hurt you. While there are many monsters to slay, there are four main beasts you’ll have to beat in order to progress, including the majestic leviathan Mizutsune and the Brute Wyvern Glavenus. The main crux of combat is comprised of Hunter Arts and Hunting Styles. There are four styles which cater for every type of hunter. I went with the Guild Style as it seemed to provide a solid stance for beginners, offering 2 Hunter Arts to equip and a balanced attack. Although I never felt like I had anything special outside the Arts I chose, I could dodge, attack and move with enough grace and efficiency to succeed. The Aerial Style allows you to perform air attacks and evasions and the Striker Style gives you a whopping 3 Arts and a quicker route to use them. Finally, there’s the Adept Style and is for the more seasoned hunter, allowing you to launch devastating counter attacks called insta-moves depending on whether you dodge at the right time.

Hunter Arts are essentially special moves; they can range from wide-ranged power attacks or opportunities to heal yourself and your friends. Depending on the weapon you choose from, certain arts can provide a great edge in battle. There are 14 weapons in total, each with their advantages, disadvantages and skill trees, but some will not let you use equipped Hunter Arts. I tried the standard sword and shield and the axe, but it was the dual blades I found to be the most suitable to how I played. They’re fast and effective, taking a considerable amount of time to deplete my stamina gauge. Every player is going to be different, but the amount of options in the Hunting Styles, Arts and weapons are diverse enough and give you plenty of opportunities to mess around and find your favourites. As a new feature, whether you love them or hate them, Felynes are now playable through Prowler Mode. Up until now they’ve been NPCs, but the Palicoes you hire can be used in quests and have some nice traits. They don’t use stamina and aren’t required to use pickaxes to dig for items, something that can be quite tedious as a human. They’re great to play as and at times can be more beneficial than playing as your hunter, with the added bonus of being able to upgrade their equipment too.

Although you’re playing on a 3DS, the visuals are really nice, especially when playing in 3D. Each of the four villages feel welcoming and full of life, with the different quest areas all diverse enough to be appreciated. The NPCs you bump into along the way have some great personalities and even the Felynes’ constant cat puns don’t grate until much later on (or when you’ve fainted in battle for the hundredth time). The music can be repetitive at times, but it’s a rousing score that helps motivate you.

Monster Hunter Generations is a tough slog with rewarding results. This is Capcom’s Dark Souls without the gothic horror. The upgrade system is great fun and the monster battles are superb. Whether you’re slaying or capturing, each monster feels different and a great joy to defeat. With the added inclusion of an easy to access multiplayer where you can team up with a multitude of other online hunters, a 100 hour plus playthrough is more than achievable.

Review code provided by publisher. You can support us by purchasing using the various links below:

Monster Hunter Generations is a great action-RPG for longstanding fans and newcomers who want a challenge like nothing they’ve played before.