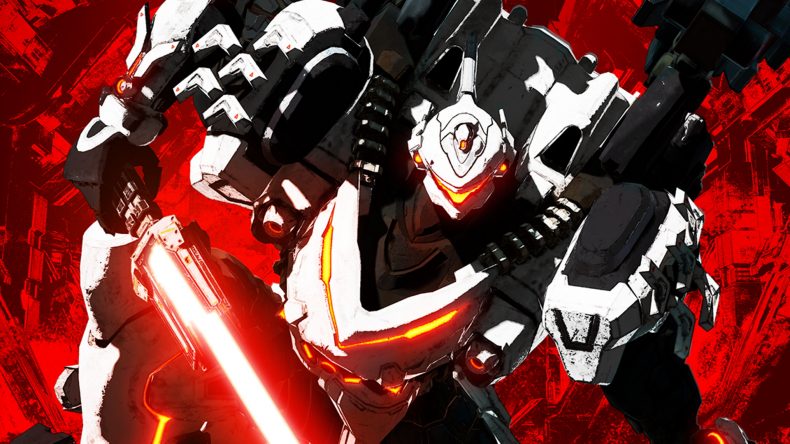 If you ever played FromSoftware’s Armored Core series you’ll feel immediately home with Daemon X Machina, the frenetic new mecha combat game from Marvelous. If you haven’t ever played Armored Core, well, hold onto your pants.

Set in a world where the destruction of the moon has unleashed an energy that corrupted machines and turned them into psychotic AIs, Daemon X Machina casts you as a mercenary pilot who, alongside other hired guns, must defend what’s left of humanity from the evil machines in giant fighting mechs called Arsenals.

The story is, unsurprisingly, pretty bat-shit crazy at times, falling somewhere between Armored Core and Attack on Titan in terms of its constant philosophical musings about humanity’s precarious position in the world and a lot of talking about justice. Without spoiling anything, the up-shot of this weird energy leaking into the world is something called Femto, an almost magical power source that allows the Arsenals to perform otherwise impossible feats. Thrown into the mix as a rookie, you’ll first cut your teeth alongside a handful of other mercs as you learn the systems and intricacies of piloting an Arsenal. It’s initially a daunting task. Missions – most of which are short, punchy affairs – deep-end you right from the get-go, dropping you into the thick of it and telling you to blow stuff up.

Your arms are controlled by the triggers, allowing you to wield two weapons at once, such as assault rifles, shotguns, shields, swords and sniper rifles, while shoulder-mounted ordnance can be deployed with a squeeze of the left bumper when you need to bring the noise. Now, if you were just clunking around in a big mech, it’d get boring pretty quickly, but luckily you’ll spend a lot of your time airborne.

Hitting jump a second time while in the air will engage your Arsenal’s flight mode, and a mid-air booster on R affords you some essential maneuverability. Flight is easy to control once you get the hang of using B to rise and L3 to descend, though it will deplete your Arsenal’s power and you’ll eventually be grounded for a few seconds while it recharges. You’ll constantly be hurling yourself into the fray with multiple enemies including tanks, turrets, gunships and AI Arsenals, and Daemon Ex Machina rewards you for getting your hands dirty and staying in the thick of combat. A steady flow of Femto keeps your Arsenal powered up, allowing you hit R3 to activate Mirage mode to spawn a temporary decoy. Alternatively, the D-Pad allows you to redirect power around your Arsenal’s systems, strengthening either flight, shields or damage output – but only one at a time. You can even hit X while on the ground to eject your pilot, called an Outer. On the ground its highly dangerous, but might be the difference between staying alive and going down with a badly damaged Arsenal. The Outer can still deal some serious damage, but they’re much squishier and obviously can’t fly. It’s not recommended to play that way, but it has its uses, and having the option makes sense.

In many ways, Daemon X Machina feels like a more competent but more frantic version of Anthem, but without any of the latter game’s bloat and sloth. The Arsenal feels heavy, the guns feel impactful – but importantly the story is interesting, even if it does feature far too many characters to keep track of. There are a lot of other mercenaries, all with their own backstories and personalities, some pushing the boundaries of racial stereotyping a little too hard. But you can unlock many of them to call on as AI partners in the Free Mission mode.

Outside of combat you’ll be kept busy with modding your Arsenal and your Outer. When you unlock the Lab you can assign genetic augments to your Outer, applying buffs like skills in a tree, some of which alter your appearance. But you can also switch your Arsenal’s various body parts, weapons, paint patterns and decals and save the loadouts to convenient slots.

Upgrading and modding is a big part of Daemon X Machina, as you’ll always be scavenging parts on the battlefield or buying them in the Shop. You can even research and develop new parts and weapons to buy later. There’s so much in this game that’s not initially visible that by the time you’re pushing through the second and third rank missions you’ll be constantly considering your next upgrade or purchase. The level of customisation and modification is impressive, and it’s deeper than just picking the armour part with the highest numbers. There’s even an ice cream store at the base where you can buy sweet treats to apply mission-long buffs to your Outer or Arsenal. There’s also a multiplayer co-op mode which we wee unable to test during the review period, which we’ll return to after launch.

It’s not the prettiest game, and it’s not without its occasional visual glitches and tearing, but the art style is vibrant and colourful, and the rocky soundtrack is wonderfully over the top. That said, Daemon X Machina absolutely won’t appeal to everyone. It has a gradual difficulty curve that welcomes newcomers, but the HUD is so busy and the systems so numerous and, if we’re honest, poorly explained, that it can take some time to really find your feet – and once you do, there’s a lot of talking, a lot of characters, and a lot to take in.

But it also feels unique on the Switch, scratching an itch you probably didn’t know you had. It’s messy and loud and brash and unashamedly balls-to-the-wall, but it’s also compelling, addictive and lovingly made. Whether you know Armored Core or not, if you’re a fan of mechs, explosions, OTT characters and relentless firefight, Daemon X Machina has your back.

Daemon X Machina is a fun and frenetic mecha game with a hell of a lot going on. It occasionally gets too busy for its own good, but competently out-Anthems Anthem in terms of gameplay.

Control gets a launch trailer

Senran Kagura Estival Versus releases on Windows this month