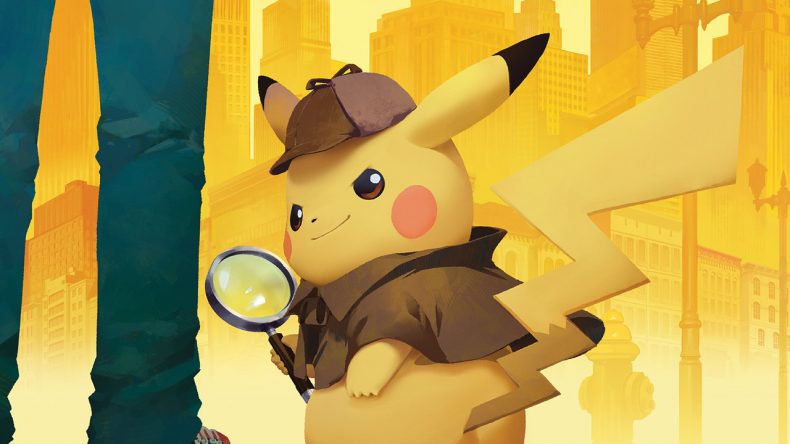 As far as franchise spin offs go, Detective Pikachu is probably one of the most unforeseeable. The star of the Pokémon anime who was never one of the original starters, but eventually became one, has been a series mainstay ever since. Now, if anything is Pokémon related, his face is front and centre. But, here…here he’s a gruff talking little yellow creature with a love for coffee and sleuthing.

Detective Pikachu is the former partner of Harry Goodman, a detective at the Baker Detective agency. While investigating some bizarre Pokémon related incidents Harry has gone missing and now his son has ventured to Ryme city to find him, and as a result he bumps into the little jaundiced investigator. Tim will move from mystery to mystery looking for clues to his dad’s whereabouts and discover something incredibly sinister lurking in the underbelly of Ryme City.

The game sees you moving through a restrictive set of environments talking to people and Pokémon to obtain testimony and checking out clues to find the solution to a problem or uncover the perp. The general logic on display here is suitably childlike, and any semblance of difficulty is mitigated by Pikachu’s constant interjections to point you in the right direction. Essentially this is ‘Baby’s first Phoenix Wright’ but without the high drama of the courtroom or the soundtrack. And I mean that literally. Detective Pikachu displays all of the negative traits of the Phoenix Wright game’s without offering any sort of solution to them. Gathering evidence and testimony is fine, and you’ll work out a solution well in advance of the culmination of a mystery, but you’ll be left floundering until you’ve talked to a particular person, or investigated a particular place before you can move onto the requisite finale for the mystery. Not only that, but when there are several items of evidence that would serve as a logical answer, the game refuses to budge until you give it the exact answer it wants.

The biggest problem with the investigative side of things is that everything is solved with circumstantial evidence. While in Phoenix Wright the spiky blue dude bluffs his way to a conclusion and eventually arrives at solid proof, but here Tim and Pikachu arrive at a conclusion that could be a possibility and instead of denying it, the guilty party just owns up. There’s never anything definitive about any of the outcomes and the perpetrators give up way too easily, it’s a childish ideal of how a mystery should end.

The game intersperses its investigative elements with moments of ‘action’ which take the form of either ‘pressing A til thing happens’ or ‘wait until appropriate time and then press A’, both of them are as riveting as they sound. You may also find yourself having to tackle some sort of logic based puzzle which may involve pressing things that correspond to colours or shapes, once again…riveting. It just seems designed to make the game as boring as possible. A lot of hard work is required to strip all of the charm out of Pokémon, but Detective Pikachu does this with aplomb. Outside of the Pokémon themselves the human cast has very little going for it. While Tim Goodman is determined he’s still very much a wet blanket, and the cast around him aren’t much better, all of them fulfilling their roles with all the gravitas of a pantomime drag queen.

The game isn’t helped with its choice of villain, a secret kept right up until the game’s closing moments (telegraphed approximately thirty minutes prior), and when it happens it’s as much of a disappointment as finding you’ve accidentally picked up peanut M&Ms rather than milk chocolate ones. When you’re making a narrative driven game such as this your cast has to be solid, believable and charming, instead we’re treated to a group of unlikable marionettes that look like Kingdom Hearts design rejects.

Aside from all these negatives there are some decent moments here; some of Pikachu’s vignettes can be entertaining, especially to those who like the slapstick stylings of Gon. The thing is while this can be a nice introduction to the crime solving video game it’s just incredibly milquetoast when you put it next to the likes of Capcom’s Ace Attorney series. People will buy it for the Pokémon tie in, and they may excuse its faults for the same reason, but this is several hours with no payoff at the end, and no amount of Pokémon apologia will convince me otherwise.

Pikachu’s detective career never manages to capitalise on an ok start, and ultimately nothing is discovered when you scratch beneath the surface.