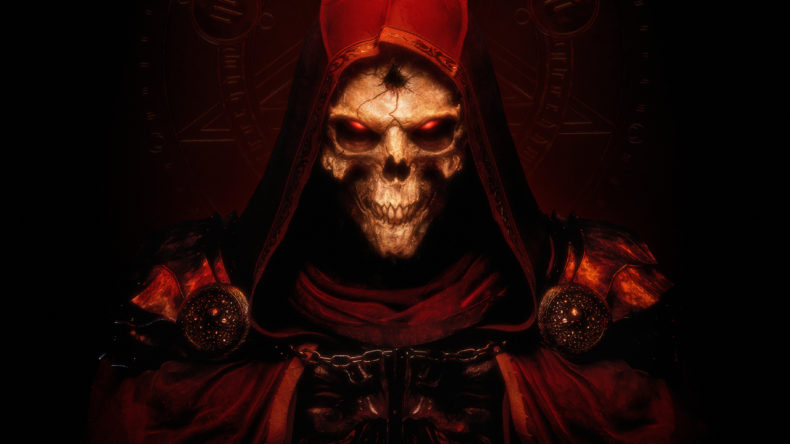 It’s not hyperbole to say that without Diablo, we wouldn’t have the modern ARPGs we’ve come to love. Path of Exile, Titan Quest, Sacred. These games and countless others aped Diablo’s formula, adding and tweaking bits and pieces here and there but maintaining the barebones framework of Blizzard’s seminal adventure. If Diablo 2: Resurrected is your first foray into this universe, you’ll see elements you recognise from a host of other games. Though, that seems unlikely.

If you’re a PC RPG player, you’ll almost certainly have played the original Diablo 2, or Diablo 3. Most console players with an interest have played the latter, since its been available for three generations. I’d imagine very few newcomers are checking this one out, but if you are then you’re in for a treat. With some caveats, of course. 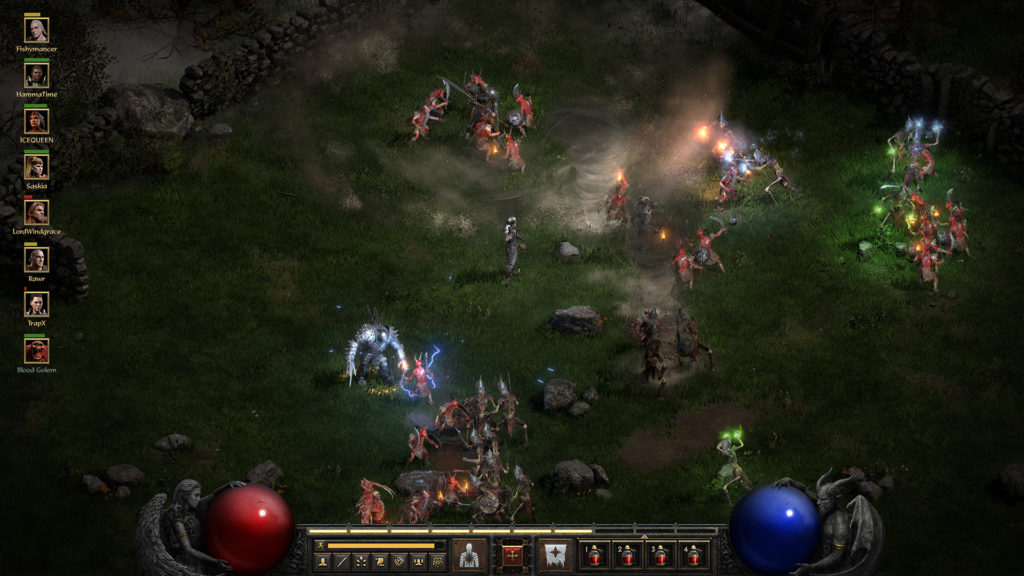 Diablo 2 sees your diehard adventurer holing up with a group of rogues at an encampment in the wilderness. You’re following the trail of the Lord of Terror, Diablo, a demon last seen caged in a Soulstone and subsequently contained within the body of the warrior who vanquished him (in Diablo 1). The warrior, though, is losing the battle to contain the demon, and leaving a wake of horror and destruction behind him. Everywhere you go, Diablo has already been, and thus monsters and fiends crowd your path in droves. Which is great, because the more you kill, the stronger you get.

While Diablo 3 made sweeping changes to the levelling system, many preferred the simpler skill trees of Diablo 2. This being almost a straight reskin, those skill trees return in Diablo 2: Resurrected. After picking from one of 7 heroes (Amazon, Assassin, Druid, Barbarian, Necromancer, Paladin, or Sorceress) you’ll head out into the wilderness to complete story-based quests and track down Diablo. 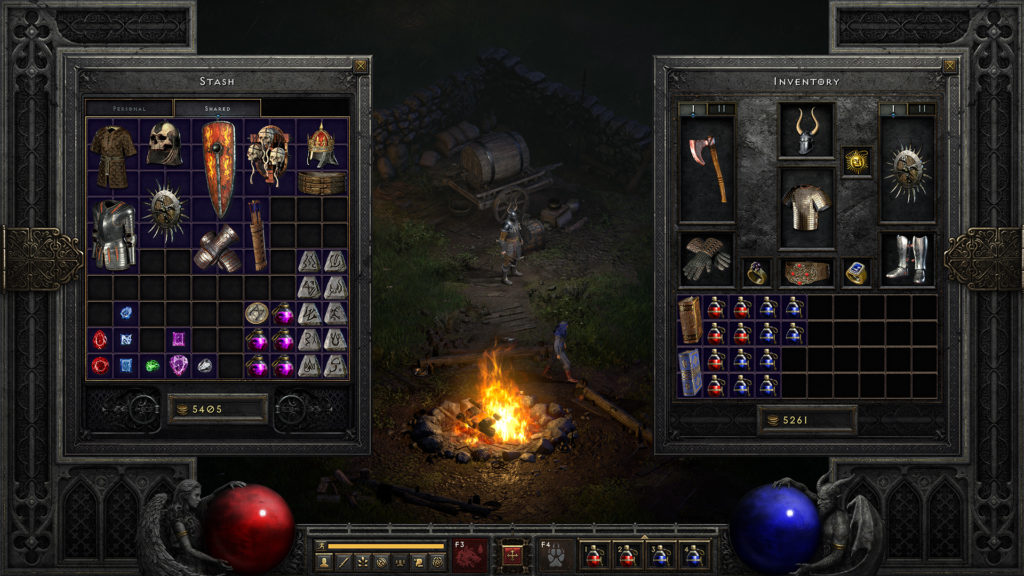 This was made in a time before side quests were so pervasive. Most of the side content comes from thoroughly exploring and replaying maps to find loot. The endgame content is just a collection of New Game + modes. And yet, its an incredibly playable and enjoyable adventure. There’s something considerably no-nonsense about Diablo 2, even when you reach the final area beyond the original story and are facing off against Dibalo’s brother Baal in what was originally expansion content.

You kill stuff and get loot, the loot makes you stronger, the XP unlocks and upgrades skills and abilities. It’s an almost endless cycle of violence and improvement, with a few things like socketable gems and runes mixed in for good measure.

The age of the skeleton beneath the shiny new flesh is made evident by how clunky movement feels. Blizzard and Vicarious Visions have done a good job with the new aesthetic, though. So good that my mind tricked me into thinking it still looks the same as the original. It does not. There’s a lot more detail, more variety in armour and weapons, better effects for spells and abilities, stronger and more detailed designs for old enemies. But make no mistake, under the skin its a 21-year-old game running on 21-year-old legs. 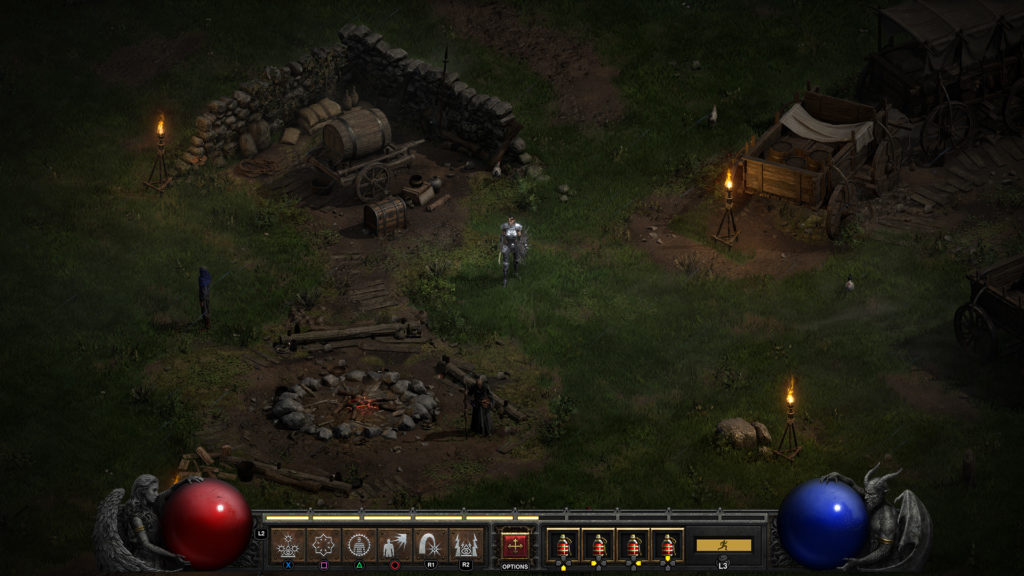 I said in my preview of the beta that it’s a shame certain quality of life elements couldn’t have been added in. The inventory is far too small, and because you can’t stack anything, you’ll either constantly be tossing stuff or making repeated trips to the base to sell loot. And if you forget to take a scroll or tome of Town Portal, you’ll have to trek to the nearest waypoint to return to town. Likewise you’ll need to identify all magical items before you can use them.

The small inventory is made worse when you start carrying charms, which are items you keep in your inventory to enjoy their buffs. Maybe it would have been too much work or even impossibly to change these elements, but it would have been welcome. There are a few quality of life improvements, though. For example, you can now collect gold just by running over it, and a push of Y (on Xbox) allows you to compare inventory items with equipped ones.

Diablo 2: Resurrected – Go (back) to Hell

You’ll find a playstyle to suit anyone among the seven classes. From the melee-focused Barbarian or the ranged Amazon, to the Assassin with her traps and the shape-shifting Druid, each character feels very different to play. It makes for interesting 8-player co-op sessions, especially as there are so many build options for each class. Tanks, healers, summoners, DPS specialists – there’s scope for all of them here. You can choose to play in permadeath Hardcore more or join the leaderboards, and can play Online or Offline characters, though the former is required to play in co-op.

If you’ve never played the original, then Diablo 2: Resurrected is a great entry point. Some consider the second game to be better than the third (I’m personally a huge Reaper of Souls fan, though) and it’s easy to see why. It’s a more uncluttered and straightforward proposition, with a superb suite of classes and a great variety of biomes in which to tackle its procedurally-generated maps. It’s hard to hide its age even under the layer of polish, but Diablo 2: Resurrected is still a damn fine game.

If you've never played the original, then this is a great entry point. It's hard to hide its age even under the layer of polish, but Diablo 2: Resurrected is still a damn fine game.