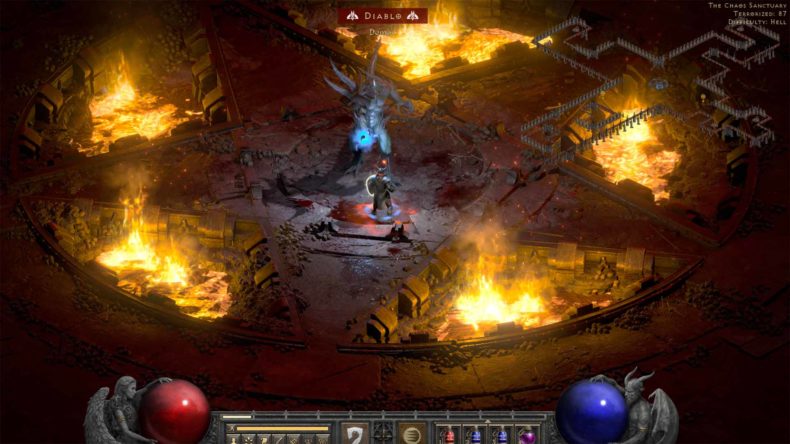 Diablo II: Resurrected has been updated to 2.5, after several weeks of testing, with Terror Zones added as an all-new feature.

There are also several general updates and bug fixes, but the big new thing for Diablo II: Resurrected is the Terror Zones, which Blizzard describes, saying “Players can take part in the completely optional Terror Zones feature that adds a fresh way to experience the journey to level 99 during seasons. Terror looms every hour as the armies of the Burning Hells cause monsters in a specific zone to increase in power and level, encouraging players to level up and collect loot in locations all across Sanctuary”.

The journey to level 99 is a celebrated experience for players and quite the milestone if achieved—a rite of passage, even. We want the journey to level 99 to be accessible to a larger population of players, offer more variety other than repeatedly farming Baal, Diablo, and Nihlathak, and most importantly, remain challenging. This is where Terror Zones come in. As we get into details, please note that players can choose to opt-out of Terror Zones if desired.

To unlock the Terror Zones feature, you must defeat Baal per character, per difficulty using any expansion character—existing characters that have already fulfilled the requirements will automatically have this feature unlocked. Once Ladder Season Two begins, players will need to meet the aforementioned requirements to unlock Terror Zones for their new ladder characters.

Elsewhere, the second ladder season for Diablo II: Resurrected is due to start on October 6th. It’ll be 5pm PDT (USA), 2am/1am CEST/UK (EU/UK), or 9am KST (Asia). There will be “six new Sundering Charms” with ladder season 2, and four different modes.

Blizzard really is supporting this one well, and it’s out now for PC, Xbox One, Xbox Series S|X, PS4, PS5, and Nintendo Switch.