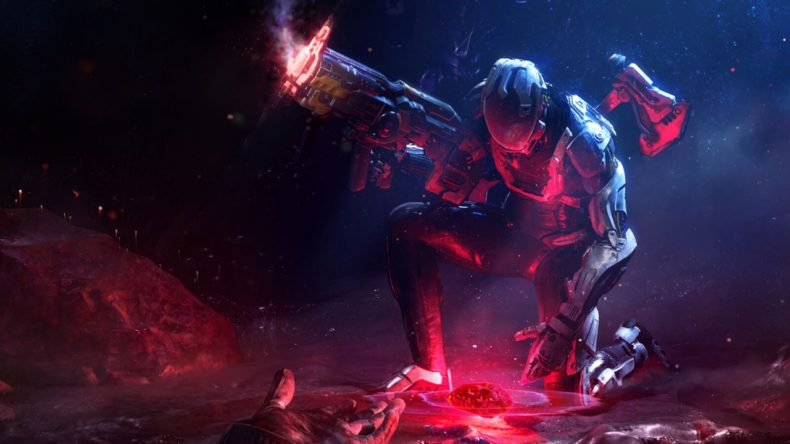 Dolmen, from developer Massive Work Studio, is a strange beast. In terms of design at least it seems to be a few years behind not only its genre but the industry in general. It feels very much like an early access game, which makes it feel even weirder that I’m playing it on the PS5.

It’s a sci-fi Soulslike that revolves around the titular Dolmen, here neither a neolithic tomb nor a Swedish man’s todger, but a piece of alien McGuffinite that has caused a space station to become infested by interdimensional nasties. Your faceless generic soldier is sent in on a solo mission (unless you engage the multiplayer, natch) to sort it all out, but this in itself is somewhat problematic. 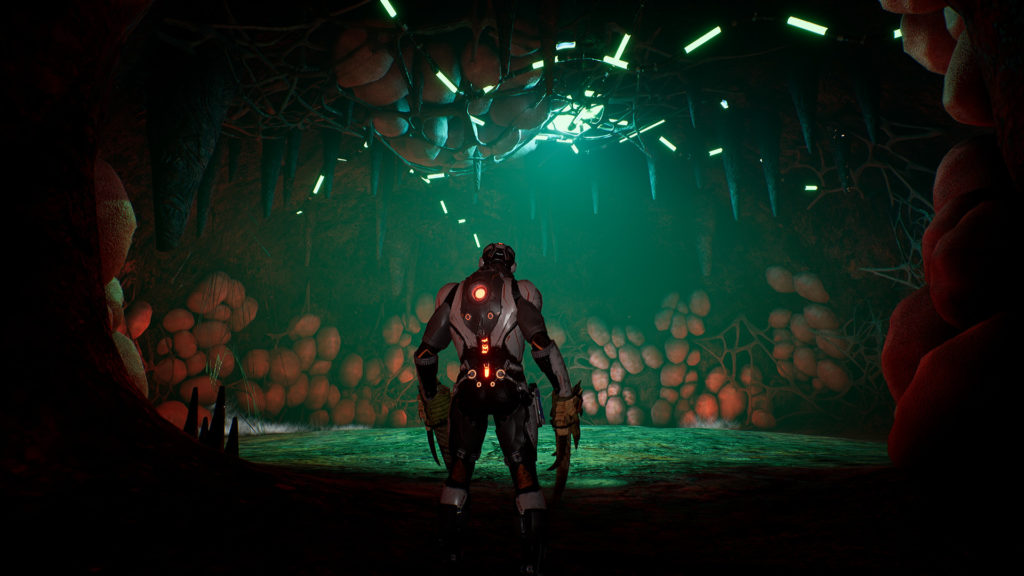 In Soulslikes there is usually a reason you’re a lone warrior in a very dangerous place. It not only creates a sense of isolation and thus trepidation, but often feeds directly into whatever sparse narrative there is. Massive Work’s decision to make your character part of a larger organisation who can communicate with you and even bring you back to the ship – a place of total safety – is at odds with the genre. There’s no contextual reason for not sending a squad of soldiers in. There’s no narrative reason for keeping you in the dark and feeding you shit like a mushroom when they could just tell you what’s going on.

The result is a world that does nothing to grip you or hold your attention. It’s a generic space station filled with poorly-detailed enemies, wherein the concept of horror that it proudly displays as one of its store tags is pared down to sticking an enemy around literally every cornercand having them jump out at you. Massive Work Studio may be a smaller team with a smaller budget than some Soulslike developers, but there games made in similar circumstances that are simply better designed and optimised. 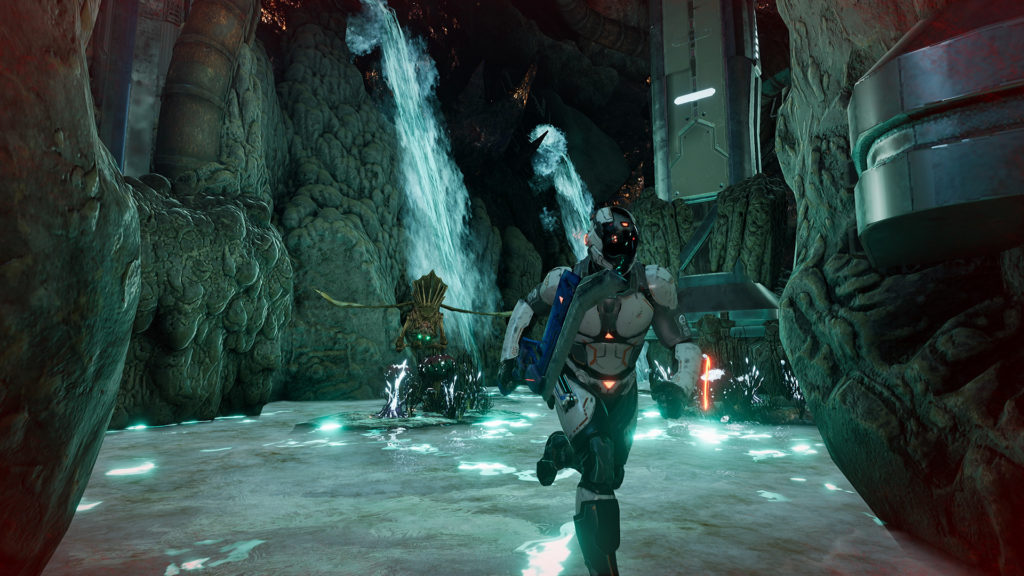 Part of the problem, besides the bland environments, is the combat. It’s thoroughly Soulslike, but clumsily implemented. Your weapon strikes have little feedback, and your starting gun might as well be a flashlight pen. Stamina runs out too quickly and takes too long to refill, which wouldn’t be a problem if you could comfortably read enemy attacks. While there are tells and wind-ups, the framerate chugs so heavily that timing a block or dodge involves entering a zen-like state where your conscious brain is several seconds ahead of the rest of Creation.

The one innovation is that you can equip an elemental reactor in your metal pyjamas that activates a powered up mode and bestows elemental damage and defence. It becomes an issue when you have everything come from your Energy pool. Your guns use Energy as ammo, your heal uses Energy to replace health, and your super mode uses energy to increase your effectiveness. The paultry four batteries you’re given at the start don’t last very long, and yes you can certainly find more and upgrade them, but again it doesn’t make sense. The Estus Flask, for example, is a magical item rendered rare by this very fact. The batteries you carry in Dolmen could be in a pack of 20 strapped to each leg, or a whacking great one in a backpack. It’s a system that renders its guns substantially less useful than modern weapons that just shoot bullets. 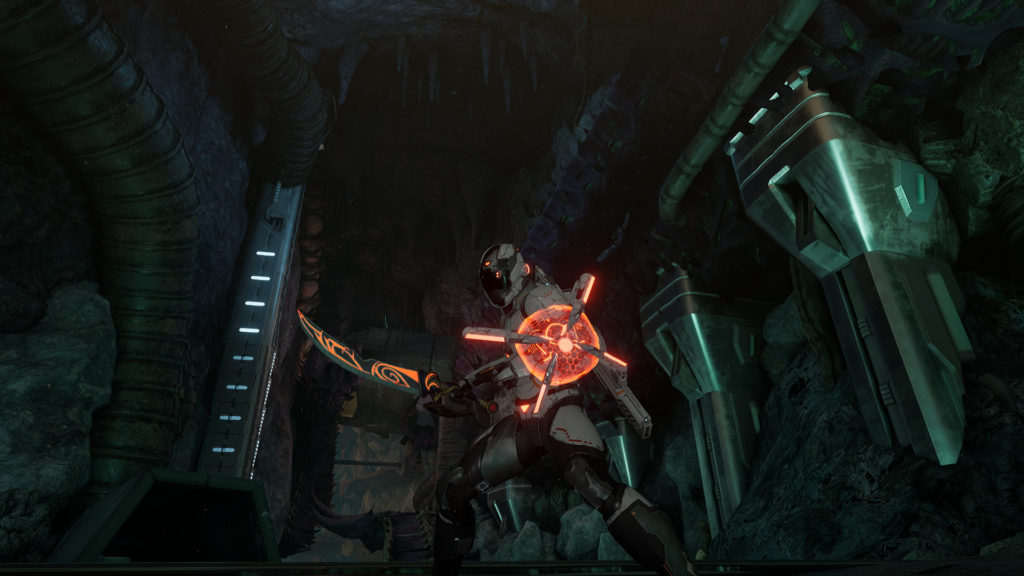 Should you find the game a little tough you can opt to take part in the multiplayer. It certainly makes certain things easier, particularly the boss fights. These range wildly from suprisingly easy to ridiculously tough, but like any game in the genre the answer is pattern recognition and timing. The problem is that the lock-on camera is incredibly temperamental when the target gets close to you, and the boss movement is as slidey and imprecise as everything else. It leads to lots of encounters that you feel you should easily be able to overcome, but struggle with because the game is so clumsy.

If you enjoyed Hellpoint and are comfortable to set your bar slightly lower than that, there’s some fun to be had here. Or if you’re just a fully paid-up member of the Soulslike Fan Club, give it a go. It certainly offers challenge and a sense of exploration. As for whether its worth spending money on, that’s tougher. There are dozens of alternatives out there either for Dark Souls fans or sci-fi nuts, and Dolmen is just too riddled with issues to recommend.

There are dozens of alternatives out there either for Dark Souls fans or sci-fi nuts, and Dolmen is just too riddled with issues to recommend.