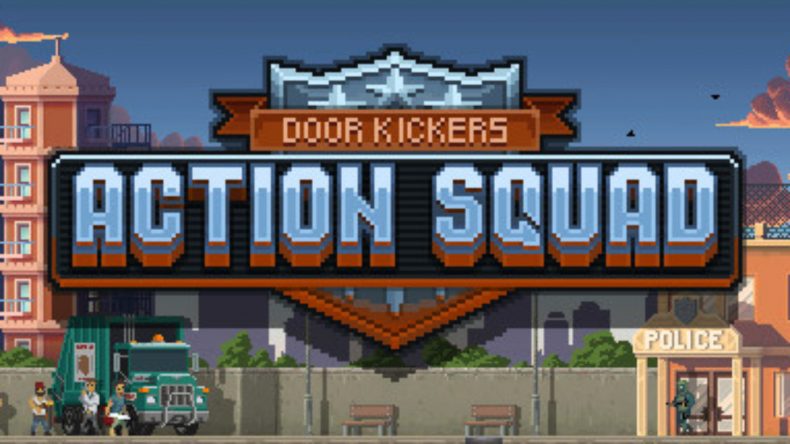 You wouldn’t believe it now, but Action Squad started out as a top-down, tactical shooter about the boys in blue taking down criminal scum with some brutally realistic rules of engagement. The original is a thinking man’s game, and one that requires lots of patience and lots of retries to save the innocent people of Nowhere City.

Admittedly, if you separate Door Kickers: Action Squad from its appearance, it still is all of that, only in 2D. It’s still about police executing their duty with extreme prejudice, it’s still brutally difficult, but the pixel art is enough to woo you into a false sense of security. Make no mistake though, Action Squad is as hard as nails. On the surface it looks like you’re just beating down doors and shooting people, which, okay, you are, but there’s an element of tactical thinking to it, too. For a start you have several operatives to choose from, each with different weapons and abilities, and a wide-spread shotgun blast is going to do more harm to the occupants of one small kitchen than a precision rifle. As you’ll be tasked with rescuing hostages each mission, you might want to avoid redecorating the walls with the brains of the innocent.

In co-op mode you’ll also need to be aware of your partner, who can also catch a round of buckshot in the eye if he blunders in the door too early. The enemies will duck, use cover, occasionally charge you or hide behind the hostages, and one stray bullet can muck it all up.

That being said, something about Door Kickers: Action Squad makes you want to be reckless, whether it’s the music or the art style, and to be honest it’s more fun that way even if it ultimately makes it harder for you. Though, to be fair, it’s not always possible to take a measured approach, especially if you’re playing co-op and your partner plays like me. Special abilities come into it too, and can turn a bad situation into a win if used at the right time. My personal favourite is calling in a sniper to take out an unsuspecting scum bag just as I breach a room. Nothing says “to protect and serve” like a gunshot to the head, right?

The only real issue I have with Door Kickers besides the occasional difficulty spike (I mean, it’s pretty damn hard as standard), is that it can become repetitive. There are lots of missions, and while the locations change, the core gameplay doesn’t really vary all that much throughout and it could become tedious.

At first glance Door Kickers: Action Squad appears to be just a throwaway action game, but if you’re willing and able to take your time, read a room, experiment with the different player characters and get on board with the surprising tactical depth, you’ll find there’s a lot more to it than meets the night vision body-cam.

Experiment with the different player characters and get on board with the surprising tactical depth, you'll find there's a lot more to it than meets the night vision body-cam.