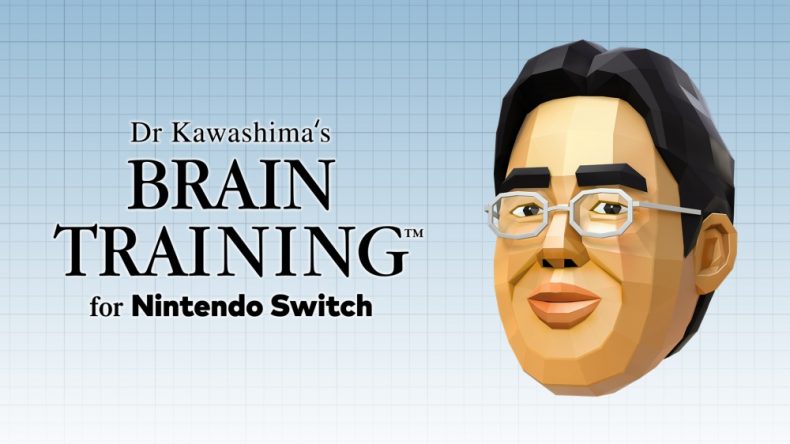 Dr Kawashima’s Brain Training for Nintendo Switch is far too long a title. We all know it, and Nintendo has been doing this a while now, but we don’t care because the experiences are so unique to its platform that we just play and enjoy. Although Brain Training for Switch isn’t “new”, per say, it does something I’ve been waiting for Nintendo to do for a while: it brings the DS to Switch.

The Wii U was far better than it was given credit for, and the porting of almost all of its games (bar The Wonderful 101 and Super Mario 3D World) suggest Nintendo knew it, while the sales insinuate they were always good games anyway. But what of the DS family and the Wii itself? Games that require a stylus are an interesting proposition, and motion controls can and do work on Switch, but until late 2019 Nintendo didn’t really push the Switch in that direction. Ring Fit Adventure brought a new “Wii Fit” to Switch, Animal Crossing is hitting the console in March 2020, and now we have Brain Training: a beloved DS game that brings everything you’d expect with a few new surprises and a few caveats. For starters, the stylus is going to get lost. It’s sturdy and feels comfortable in my large hands. But as someone who has gone mostly digital for game purchases recently, the only way I’ve found to ensure the stylus doesn’t get lost or get eaten by the dog is to pop it inside the case when not in use. It’s a far cry from slotting it into the console, and part of me wonders if a console revision down the line will include a discreet slot for it to pop neatly inside.

But you don’t actually need the stylus at all. The idea is, I suppose, that it’s easier to write with a “pen” than your finger, but the reality is that the handwriting recognition isn’t accurate whichever method you choose. The bizarre thing is that I don’t know why this is. It struggles with the number “5” and you can adjust settings to change whether it recognises a single or two-stroke approach to your handwriting.

But it isn’t just the number five it struggles with, nor is it just my handwriting. My children and my wife could both be found randomly exclaiming “I didn’t write that!” during multiple tests. This is frustrating, and it happens enough to be noticeable but it’s doesn’t recurring so regularly that you want to put it down. Then again, when you’re measuring your brain age and two incorrectly recognised bits of writing make you 80 instead of 50, it feels unfair and out of your control: it’s not a good look. One of the major new additions is the IR sensor games thanks to the Joy-Con controllers. It all feels a bit confusing because I (and my family) found that by far the most comfortable method of playing Brain Training on Switch was to detach all the Joy-Cons and play like it’s a tablet, so to be asked to use the Joy-Con sensors is… well, it’s fine, but the tests aren’t particularly amazing, either.

You might be asked to hold your hand out and play rock, paper, scissors, or perhaps you have to do arithmetic on your hand and show results with your fingers. The trouble is that the blurry IR sensors are either too responsive or not responsive enough. It’s never clear if you’re supposed to pop your hand out of view and then into view with an answer, but some math questions I answered due to having the previous answer on my fingers already. These games aren’t playable on Switch Lite, of course, and you will have to reply “no” when asked if the Joy-Cons are accessible during a test. It’s not a particular elegant solution to the hardware division, but at least it doesn’t try to force you into something you can’t do.

Elsewhere you’ve got training minigames that get you to memorise images, do two things at once, or do quick arithmetic. The main test is built of three main areas, but the final area is almost always around memory and lacks variety, often causing frustration and an “oh, not this one again” moment. But perhaps that’s the idea, you’re supposed to be annoyed because you’re bad at something, and want to improve. Sudoku returns, of course, and is as addictive as ever, and the inclusion of optional leaderboards pulling from your friends list is a nice touch. On that note, I will say the ability to just pick which of the Switch console users is doing a test and just, well, do it, is excellent – there’s no messy account switching here.

But the real wonder of Brain Training is that it signaled a clear shift in my household. From something I would sit and play solo to suddenly everyone having a go at improving their brain age again, this is a major sign that Nintendo is pulling from previous ideas and successes to improve the Switch beyond what we ever imagined. With Animal Crossing on the horizon, it’s clear to me that the Switch is going from strength to strength and, despite a few missteps within Brain Training, the price is right and the experience is worth it.

It’s still compelling and you’ll want to train every day, but perhaps it’s not quite as essential as it once was when we played it on the DS-family of handhelds. Just don’t take that brain age too seriously, especially when Dr Kawashima appears to tell you that you’re 22, before saying he’s only joking, you’re actually mentally 62. Yes, really: even Nintendo is trolling now.