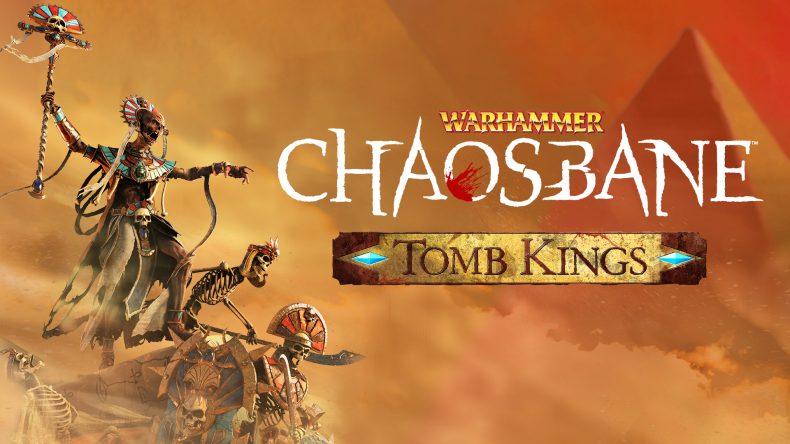 When I reviewed Warhammer: Chaosbane earlier this year I did so on Xbox One. While I found it mostly enjoyable, it lacked a certain something that I was unable to identify at the time. I now realise that what it was lacking was a mouse and keyboard.

Revisiting Chaosbane now to take a look at the latest DLC offering, Tomb Kings, I find myself enjoying it much, much more. Playing now on PC with the improved performance, visuals, and controls, it’s a much better experience.

Part of this may be owed to the fact that I’m way past the base game’s dreary trudge the most boring sewers in Nuln. It may also be because the new setting reminds me of the desert wastes of Diablo 3, but that’s a little unfair. In Tomb Kings you find yourself, as either of the four protagonists, working alongside the Amethyst Order in the deserts of Nehekhara, where a once-noble civilisation has been swallowed by the sands. The story neither offers nor demands much, requiring you to delve into each of the ten tombs scattered around the desert and destroy the evil lurking within.

With no increase to the level cap those who have already hit 50 will be in it mostly for the loot, which is a shame in some ways as a boosted cap would give you something more to chase. As it stands you’ll have to content yourself with smashing skeletons and scorpions and various other desert-dwelling beasties to advance further along the new God Trees for incremental boosts to stats and skills.

The campaign is around 2 to 4 hours depending on your gear. I’ll admit to being handed a couple of max-level characters by the developer, and jumping in with Magnus and Bragi was just insane at that level. You don’t have to be in endgame though, as you can trigger the Tomb Kings campaign by travelling to the area via a waypoint once you’re through the opening areas.

If nothing else, the setting is a welcome splash of colour, as golden sands give way to black and gold catacombs, and the entire area simmers with atmosphere. It’s just a shame there’s not a little more to it than more things to kill.

That said, the new are feels like a real step up from what we had before, and the magic effects look gorgeous in the dark of the tombs. It doesn’t really fix an awful lot, though there are some quality of life changes present alongside additions such as the Permadeath mode.

I had more fun in a few hours in Tomb Kings than in most of the rest of the game, and it wasn’t all down to having epic gear. If Eko Software and Bigben are going to continue providing DLC of this quality, then I’m excited for Chaosbane’s future – I just hope there’s more of it next time.

Tomb Kings is a solid first DLC offering, though it's a little short. If the devs are going to continue producing expansions of this quality, though, I'm in.