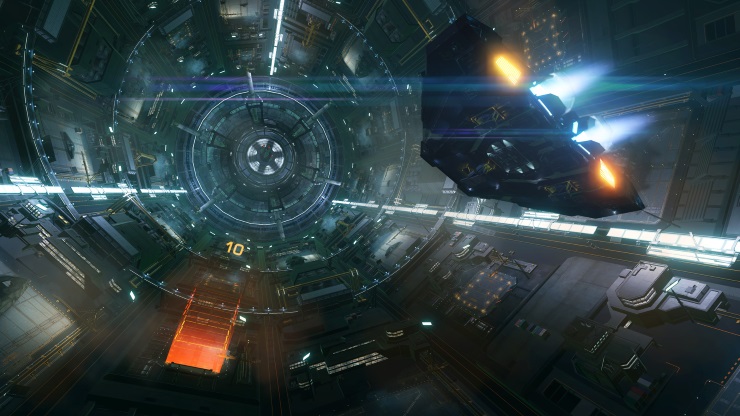 Editor’s note: Elite: Dangerous is a huge, sprawling game to review. So we’re taking a slow approach to it. We’ll be adding to this review over time, eventually giving a score when we feel comfortable doing so.

Elite: Dangerous is massive. It took me at least seven hours, if not more to truly understand what I was meant to be doing, and I’m still somewhat unclear on certain aspects. Hell, it took me almost three hours to figure out how to navigate the two menus situated to the right and left hand side of the cockpit. This is a complex game.

Those first few hours were not the most enjoyable experience I have ever had, but strangely they were never overly frustrating. One of the major reasons for this was because it felt like I was learning something new every few minutes, even if it wasn’t the thing that I was trying to learn. The early stages have been full of this: discovering things by accident and feeling really good because you figured it out on your own, and didn’t consult a guide. But Elite really starts to come to life once you have the basics locked down. In the massive sandbox that is space, you are free to do as you please (providing you can do it in a spaceship), whether that is being a humble courier, exploring uncharted worlds, or becoming a horrible space criminal. As I have never played anything similar to Elite, and have actually never even used a flight stick before, I decided that taking the combat route out of the gate probably wouldn’t have been the greatest idea, so I decided exploring was the next best option.

Exploring is one of the three main ways of earning money (and generally existing) in the Elite ecosystem, alongside trading and combat. The role of an explorer involves finding undiscovered planets and stars then scanning them to gain information and selling that information to other star systems. Exploring the new systems is incredibly simple one you have found one – some may have many undiscovered objects, whereas others may have none. The issue arrives once you have the data to sell, as you can’t sell it within twenty light-years of where you found it. The default Sidewinder ship you start in can only jump around seven light years at a time, meaning multiple jumps are required to be able to sell anything.

It is by far the simplest of the three disciplines within Elite (and a great place to get started), but it isn’t always the most efficient. Different types of solar objects result in different sale values. An earth-like planet will be worth significantly more than a gas giant or a star, but the chances of finding one of these (at least so far) appears to be very slim. So exploring, while a good place to start, doesn’t offer the sustainability in the early game that I want. But discovering new worlds has been quite fun, so instead of abandoning it entirely I headed to the nearest star station to look for courier missions. As you can probably guess, courier missions involve being given cargo, and transporting it elsewhere in order to get paid. After combining these missions with exploring, my credits started going up and I actually felt like I was accomplishing something, although there isn’t really a reason why I’m doing it.

One of the most difficult things I experienced during the first few hours of Elite was actually docking at a station. I knew that this was a difficult thing to do before I started playing, so I read up on it before I even installed Elite – so I thought I knew everything there was to know. I knew the entrance would rotate so I would have to rotate with it. I knew that I would have to land on the assigned docking pad and not another. And I knew that hitting someone else was a big no-no. What I didn’t know was that a star station will not allow you to dock if all of its pads are full, and this had me stumped for quite a while.

After eventually realising why this was happening, I found that going into a solo game would solve the issue. But now, as far as I can tell there is no reason to play in multiplayer, while I am playing the way I am. Exploring doesn’t change in solo mode, courier missions don’t change and I am always guaranteed a “parking space” at every station I visit. I’m sure once I start wanting to fight others then the proper multiplayer option will be the only option, but right now solo seems to be the only way to go. I won’t pretend to be an expert in flight sims and how they control, but navigating my ship around the universe has, so far, been fairly simple and fun. The majority of your time will be spent flying your ship, and with my HOTAS set up it is incredibly easy to pick up. The controls are responsive and not overly complex. I must admit I haven’t tried mouse and keyboard controls yet, but it’s on my to do list.

My initial time with Elite: Dangerous has been entertaining enough, but I must admit that I’m still not entirely sure why I’m doing the things I am. Apparently an update coming soon may add more reasons for doing things but now the only pay off appears to be working towards getting new ships and upgrades. The trade markets are something that have piqued my interest, and that is probably where I will head next until I feel confident enough to start proper combat. There is still a lot to learn and even more to explore, but so far Elite: Dangerous has been fun, if a little confusing. Trading was my bright idea after becoming slightly bored of exploring and running courier missions for what felt like almost no credits. I also imagine that the BBC series Del Boys and Dealers, where people buy random items and then sell them for large profits, played a factor as well because I needed money in Elite and I wanted it as fast, yet easily as possible.

The majority of star ports that you visit within Elite will feature a commodities market where goods can be brought and sold for varying prices (depending on where you are in the universe). The basic concept of trading is that you buy items from a system that has an abundance of them and thus low prices, then jump over to another system that is lacking in the items you just purchased and sell them for a cool profit.

Sounds simple enough, except it isn’t. The first issue came with the fact that when I started my trading exercise I was still rocking the default Sidewinder ship, which only has space for four pieces of cargo and a tiny jump range. The small cargo size isn’t ideal, but is manageable if you can buy something really cheap and sell it for massive profits. However, the jump range is what killed off the idea of trading properly until I got a new ship. See, you can’t just buy some goods for a low price at one station and then make the short journey to the next system to sell them at a massive profit, because unsurprisingly these systems will either have similar resources or will trade themselves. This means that to make any real profit large journeys are usually required. Having a limit of around seven light years jump range makes doing any meaningful trading very difficult in the Sidewinder because getting to a station that will pay good money will often take multiple jumps and refueling stops.

Realizing that trading wasn’t going to work out until I managed to grab some extra credits to get a new ship, I returned to the exploring and living my life as a courier – the strategy that made up my first 15 or so hours. It got to the point where I felt like I was grinding for credits. Eying up the more expensive Adder ship was probably part of the problem, but my income didn’t seem to be breaking more than five thousand credits each hour. It got to the stage where the grinding became so tedious I would have a Twitch stream on my 2nd monitor to keep me entertained while I cruised around space, hauling cargo and scanning planets. Actually getting far enough away from where I started resulted in a big injection of credits thanks to finally being able to sell my data on stars and planets, and after focusing a bit more on exploring and not going back on myself I was ready to continue my Elite journey with my new ship the Adder in tow.

I have only had a few hours with the Adder as my main ship but already the difference is huge. My credits per hour ratio has increased significantly, thanks to the larger cargo hold that allows me to run higher paying courier missions and then usually have some room to buy some commodities to trade. The act of flying the Adder itself feels slightly different, but not overly so. The larger jump range compared to the sidewinder has opened up some new routes that previously would have taken ages to complete and although the flight speed is the same a few upgrades that I am looking at will boost that significantly above what the Sidewinder could offer.

Grabbing the Adder has certainly rekindled my love of Elite. It hasn’t changed anything dramatically and looking back I am doing exactly the same stuff as I was before. But just having something slightly different and actually feeling like I am progressing in the universe in a meaningful way has certainly made things much more entertaining.