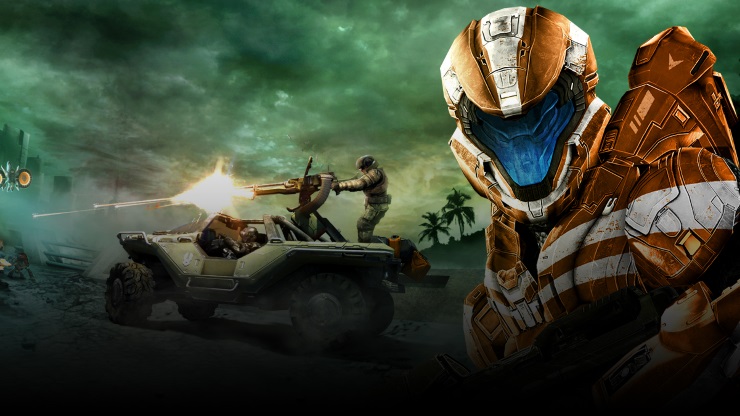 Spartan Strike is the follow up to Spartan Assault, and has a story that is cannon fodder when put in the terms of the full saga. Taking place around the time the Master Chief was kicking major covenant ass in Halo 2, it focuses its attention on what happened outside of the gunsights of The Chief, with the first handful of missions taking place in Johannesburg where the covenant are hunting for The Arc, a sacred monument they need to activate the rings and purge the galaxy of the non-believers.

Now that you are all caught up, what’s changed? Spartan Strike is a twin-stick shooter, just like its predecessor, and action takes place from a 45-degree angle, giving the same top-down vantage point as before. Improvements have been made in weapon aiming, and this is where I found the most noticeable enhancement in terms of gameplay. Shooting feels more precise here, thanks mostly to the aiming auto assist which is provided. The game needed the aiming assist, badly, and now that it is here, this is a Halo title that is far more playable and enjoyable, just for this one change. Weapons feel weightier and more deadly, and I found myself enjoying destroying the enemy wave after wave while waiting in the dentist waiting room. My on-screen spartan handled surprisingly well, with subtle thumb movements picked up and translated into the game without much issue. I’m not really a phone-gamer, so it may just be a case of me underusing my hardware (Lumia 930), but the level of control I had over the game was a delight. How this translates into ‘lesser’ phone models, I don’t know, but on my device, all was well.

Spartan Strike takes place in a variety of Human, Covenant, and (new to the mobile series) Promethean environments, and it’s Promethean and Covenant enemies you will be taking on. You’ll be using their weapons, too, alongside the usual UNSC fare. Missions are structured into a series of five-slice levels, each of which takes place in a different environment. If I have to beat Spartan Strike with a stick it will be because the mission variety is poor. Run to location A and collect artifact, then deliver it to location B. Kill everything between point A and point B. Rinse and repeat. Some levels let you get behind the wheel of a Warthog or another moving vehicle, which is a nice change of pace, but this alone isn’t enough to keep Spartan Strike feeling stale long before the credits role. The two years since Spartan Assault’s release has seen the usual leap forward in tech, and as such Spartan Strike benefits from a host of visual and audio improvements – this really is one of the most impressive mobile games I have seen, not from an artistic perspective, but purely from a technical viewpoint. There is advanced lighting, animation and particle effects all on show. For a mobile game, it is awesome, but boy does my hand get hot playing this game.

Spartan Strike is a competent, enjoyable mobile twin-stick shooter from Halo custodians 343 Industries. It represents an improvement over its predecessor in every way, but the lack of any multiplayer is a big disappointment. That said, there is enough here to make it more than worth your money, even if you’re simply a Halo fan looking for a bit of fun on the way to work.

A competent twin stick shooter that will bring joy to Halo fans looking for fun on the run.