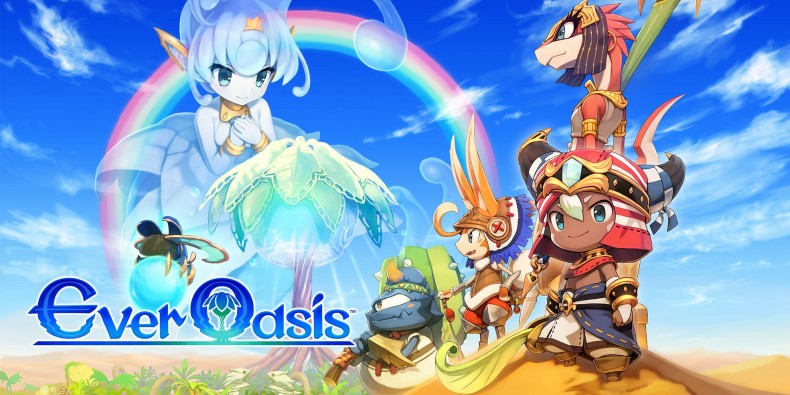 Deserts are harsh, unforgiving places. They’re sprawling expanses of sand devoid of thirst quenching fluid. The world of Ever Oasis used to be filled with life until the Chaos came and turned everything to dust. Now little people called Seedlings partner with water spirits to create pockets of verdant greenery to give people respite from the barren wastes.

You’re one of these seedlings. Your brother’s just been killed, you’ve lost your home and you’ve been sent to an unknown place with only the clothes on your back to your name, but you don’t look back in anger, instead, aided by the water spirit Esna you start a new Oasis with the goal of providing a safe refuge from the Chaos enveloping the world. As a new chief you’ll need to micro-manage your oasis as a small economy, encouraging people to move in to your little area of paradise and to help it grow. You’ll have to gather materials, to ensure the shops are stocked, fulfil requests to make sure everyone’s happy.

You quickly get into a routine of going out and doing a quest or two, coming back to restock the shops and collect your share of their earnings, tending the garden and going to bed, and there’s a certain catharsis to it, because it’s all so lovely. Seeing the joyous faces of the shopkeeps when you stop by to replenish their stock and the fanfare whenever you get a new resident elicits considerable glee. When certain populace targets get hit you get to expand your oasis allowing more shops to be built, and eventually, more garden space and monuments to your achievements. And then as things start to seem like they may get a bit too much for one person to take care of, you get staff to assist you; you’ll be able to assign people to tend the gardens for you, exploration groups to farm materials and someone to distribute said materials to the shops instead of you having to make the rounds. You’ll still need to wander round to take up loyalty quests and to pick up your money from the stores, sort of like a mob boss handling his own shakedowns, d’you know what I mean?

Combat is simplistic, with a two-button set up for quick and hard attacks and rudimentary combos. Enemies have easily readable ticks to signify when they’re going to attack and what attack they’re going to use; later enemies look the same but are larger and coloured differently meaning that difficulty is gauged by how much damage they dole out rather than a switch up in tactics. There’s a crafting mechanic too allowing you to craft new armour to mitigate damage and new weapons to speed up the death dealing process, and after a period where you’re the only one who engages in combat you’ll eventually get to take out a three-person party out on adventures. Different party members have different abilities, some can mine, others can smash boulders, some can dig while few can cut down spider webs. While adventuring you can switch control between your compatriots, which you’ll need to do as they cannot use their skills of their own volition. This creates a puzzle-like element to the dungeon crawling you’re asked to partake in, as you cannot use these abilities yourself and you’ll often go out without the skills you need to get past certain obstacles, meaning you’ll be required to make journeys back to switch members. This faff is helped somewhat by a quick trip function called Aqua Gate, which allows you to go back to the Oasis, then back to where you last teleported from afterwards, which is good. The problem is that Ever Oasis changes things up so much as you get further, and you can find yourself having to switch members three or four times in a matter of minutes, enough to test even the most patient of seedlings.

There’s a separate issue with the assisting AI, however, the complex layouts of the locations and dungeons can result in their pathing abilities being restricted and them not following you as a result, at other times they can disappear completely and they only reappear when you switch party characters which left me fighting rather large enemies solo on several occasions, I guess you’ve just got to roll with it.

Ever Oasis is basically a Harvest Moon-esque game with semi-open world roaming and Zelda-like dungeons. It’s nice, aesthetically and thematically, with lovely solid chibi style characters and some wonderfully twee music that I just can’t stop humming. It falls down somewhat with the adventuring, what with the AI issues and slightly simplistic combat, but the town management side of things can really get its hooks into you. There’s a serious buzz to be had whenever your Oasis gets a big transformation. This is a game that wants to make you smile, and it will do just that; just don’t expect a champagne supernova.

Unlike the deserts that surround your civilisation, Ever Oasis is far from barren.