previous
Toukiden 2 Review
random
next
Snipperclips: Cut It Out, Together! Review
0 likes 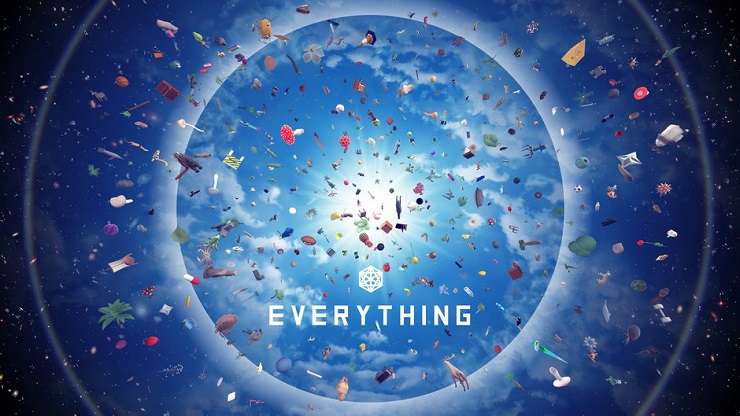 It’s difficult to put into words just what Everything is. If I told you my game began by rolling a deer around like in Katamari, and continued on to moving an entire galaxy, all the while listening to seminars on the philosophy of our existence…well, you’d probably think that I’ve lost the plot entirely. But that’s just the kind of experience available in Everything.

I say “experience” because I can’t exactly define it as a game. At least not in the traditional sense. There are no pre-defined goals, no scores or timers, it just nudges you in certain directions now and again, in order to teach you how to play.

The premise is simple enough: you wander around, “singing” to anything and everything (much like the singing in Journey) before switching control to another animal, vegetable or mineral and repeating the process. Holding L2 will show you nearby selectable things that are smaller than your current avatar, and R2 shows you bigger things. Once you’ve selected a big enough avatar, you can “ascend” to the next level, which grows to entire land masses, then planets, then the sun, and upwards to galaxies and beyond. The sheer scope and depth of this procedurally generated universe is absolutely breathtaking. At one point, I went beyond the stars and into what I can only assume was another dimension altogether, and ascending further actually began the whole process over, as I turned into a microscopic organism on an alien world. It just blows my mind how much content has been created, especially in a game that’s mostly been made by just two people.

Your first hour with the game will probably leave you wondering what’s going on, as you move around the environment, calling to other animals and switching control to various inanimate objects, but it’s somehow compelling. When you begin to learn how things work, you’ll find yourself directing a herd of antelope as it stampedes across a dusty plain (I say “stampedes”, but they all roll at right angles), or rolling a bunch of large boulders around a snowy tundra, and whenever you begin to tire of that, there’s usually several other options around.

The scale of everything is impressive, as switching to an ant literally changes your perspective, and even time seems to pass differently. It does, in fact. The lower you descend, the slower the passage of time, and nothing shows this off better than rainfall, as giant droplets fall lazily to the ground, before exploding into a shower of smaller droplets, all unfolding in a kind of slow motion. It’s beautiful to see, quite honestly. Conversely, when you’re moving a continent across the seas, the sky spins at an alarming rate, the sun rises and falls in seconds, shadows swirling around as you go. But all this unfolds in a realistic manner, and ascending to the solar system shows fictional planets orbiting the sun properly, as moons orbit their respective planets. And the fact that you can switch to any of those planets, then descend below sea level of every one, just hammers home how much depth there is in Everything.

It all looks nice, too. I mentioned Katamari earlier, and this has a very similar art style, albeit with a little more realism. It also has a bit of that low poly look, much like Astroneer or even No Man’s Sky, to a degree. Animals all have the shape of their real life counterparts, and the right colours, but there’s a slightly cartoonish quality to them, in spite of their realistic palette. When you arrive on a city continent, that’s when things get a bit silly, as you can group together similar items. Moving a group of office buildings around a city map, or have twenty cars beeping and honking their way over every surface, all looking ever so slightly like a cartoony version of an old Flight Simulator map, that’s when the oddball nature of Everything really comes into focus.

This daftness is probably for the best, really. If it was a po-faced documentary, you’d likely grow tired of the game after half an hour, but make it a little over-the-top and people might stick around a bit longer, even enjoying the philosophical musings of Alan Watts’ seminars hidden around the universe. Sound is another part of the game that works very well, with a very soothing soundtrack behind it, and some really lovely ambient effects within each biome. Wind whips dust around sandy continents; traffic drones and the general din of human life permeates the air of city continents; and there’s a wonderful stillness beneath the ocean or in space. It all adds up to a very relaxing gameplay experience. Except for the rare moments when the game suddenly flashes odd messages at you, which feel out of place as they tell you that lies and dishonesty killed a world, and other equally strange statements that go completely against the game’s usually soothing nature. Perhaps they’re supposed to have a deeper meaning, but in a game where animals roll about, it just loses all sense of seriousness.

Where it did begin to lose me, was when it got to a point where it told me to return to a crystal that I saw when I first started the game. There’s no way to retrace your path and I had already moved through several galaxies and, as mentioned before, ascended to the point of restarting from the very bottom on an entirely alien world. I will never know what that crystal does, and the thought of going on a massive search for it just filled me with complete apathy. See, that’s the main issue of Everything; the first two or three hours are fun as you test the limits of what’s possible, moving from world to world, galaxy to galaxy, and beyond. Hell, you can even transform into anything you’ve previously discovered, even planets, allowing you to create an infinite existence. But that’s it. Nothing changes, so you will likely grow bored after the initial “wow factor” wears off.

Ironically, this game without limits is actually more limited as a result.

The sheer scope of Everything is an incredible achievement, and it does offer at least a few hours of entertainment, before it inevitably becomes a bit stale.