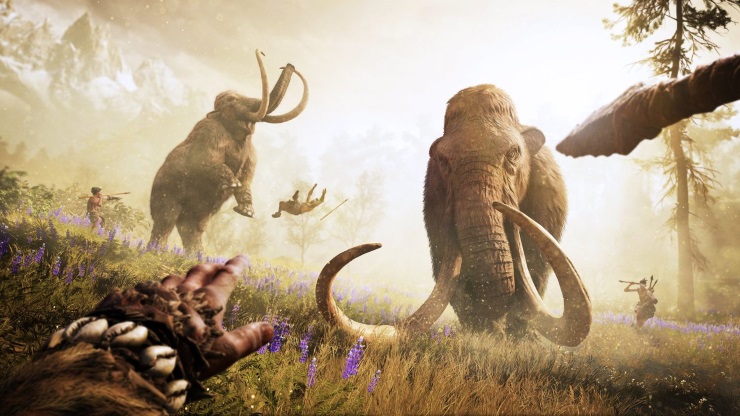 In the tall grass, I’m stalking the Udam as they escort a captured member of my tribe through this forested area. I’m definitely capable of taking them down; I have more arrows than I need because all I have to do is make sure the one that’s readied goes straight through his skull – it’s simple. Well, it’s simple right up until the point where a very cross jungle cat takes exception to my presence and attacks me, alerting the rival tribesman and a nearby bear to my location. Luckily, I dispose of the jaguar with a few flaming arrows and a couple of blows to the head with my club, while the bear has some Udam for lunch. Before I can save my fellow Wenja and tell them to head back to camp, I have to deal with a massive bear that’s not too pleased with me – I can tell due to the lack of a smile on his rapidly approaching face. Thinking that the big man might be looking for seconds, I throw out some bait that he laps up in a heartbeat, giving me an opening to introduce myself to Mr. Bear, explain that there was a misunderstanding and tame him so that he agrees to do my bidding.

These are the things that the Far Cry series can do better than anything else. We all play through the story missions and can have shared thoughts on certain characters or situations, but how we get there can be quite different. Primal recaptures much of what was lost between Far Cry 3 and 4, while also changing things up enough to feel fresh. You don’t assume the role of a foreigner that will save an adopted homeland with myriad firearms that he’s never held before and become some sort of demigod in the process. You have a place in this world because it’s yours: you live there; you hunt there; you kill there. In Central Europe, the Wenja tribe roam the lands of Oros with little to trouble them as they hunt for their keep, that is until the cannibalistic Udam, and the masters of fire, the Izila, wage war on the Wenja. Left in an almost irreparable condition, it is down to you as Takkar to rebuild what the tribe once had in the picturesque setting. Naturally enough, being set in the Mesolithic period, characters only care about the state of their people and punishing their rivals. There aren’t too many deep and meaningful threads across, but from what we know of the era, it’s been captured very well. Oros is a dangerous place because of these savages that will stop at nothing to ensure they are top of the stone age pile, which makes it feel alive. The story is simple, yet effective, but little things within the world such as each tribe having their own fictional language show the level of thought that’s been put in. Things just fit, like hunting.

Skinning a wild boar has never made more sense. You’re a caveman, so in order to craft weaponry and fill your belly, you need to get out there and mercillessly murder a few wolves. Granted, their furry little faces will melt your heart, but only before they try to gnaw off your leg – it is all about survival of the fittest, after all. Both the gameplay and narrative are rarely at odds; a fact that can’t always be stated when discussing the series. Kill one of the many beasts to get a larger arrow quiver and chow down on the animal flesh to replenish your health – the world building is some of the best I’ve seen in a video game in quite some time. Takkar’s prehistoric utility belt of spears, arrows, and clubs are all made from collected resources, lending credence to your actions. One thing that hasn’t changed is how fun it is to spend a few hours ambling through the jungle, mowing down your prey from afar with archery skills that would make Robin Hood jealous. The survival aspect is pushed to the fore, somewhat, like the ever-growing popular-genre that zones in on that particular facet. The quite large map is split up into three regions with distinctive looks, but the one that stands out for harshness is the Arctic climate of the north. The weather change isn’t just for aesthetic purposes as the cold can actually kill you if you’re not wearing appropriate clothing. Primal never ventures into hardcore territory, and what’s included is a nice change of pace, although seeing more elements of the survival genre creep in would’ve been welcome.

Even if they could’ve delved deeper into survival, what with that being the common theme, its prevalence is still very clear. Come nightfall, if you’re lacking the relevant ingredients to produce new spears, or arrows, chances are you’ll find yourself up against a predator that proves too much. This is possible during the day too, obviously, but once darkness comes, it’s a completely different story. If you’re deep within the flora, and find yourself without the means to create fire, the fauna will have a field day. Fire is paramount; the Izila may use it to their advantage in a battle, but you need it just as much. Setting arrows ablaze isn’t just a mechanism to cause chaos in an Udam outpost; it lets you see the dangers of the world around you when Oros is plunged into darkness. Whilst I wouldn’t say you can’t see everything in front of you, night definitely restricts your vision a lot and effects how trigger happy you are with with that bow and arrow you hold dear.

And you do hold it dear because, if you’re not aware, automatic firearms weren’t exactly plentiful in 10,000 B.C. You rely on your club for close-quarters combat, your bow and arrow for long-range efforts, and your spear as a combination of both. Flinging arrows at both quadrupeds and bipeds isn’t new to Far Cry, but it’s never been more important or focused upon. Few things are more satisfying than pinging a pesky Udam right between the eyes with a flying bolt. Once you become accustomed to every shot needing to matter rather than needlessly spraying bullets, it’s an absolute treat. However, the same can’t be said for the messy melee. As an adversary legs it up to you, close enough for a smooch, it becomes an exercise in who can hit the other one in the face enough to kill them first. I suppose they are a primitive lot, as the name on the title screen would suggest, but you’d think they’d retreat after a few clubbing blows to the temple instead of continually charging at you until someone dies.

The four-legged creatures of Oros appear to be a bit more clever than their human counterparts, at times. They’ll pick and choose their battles, depending on what your arsenal consists of. If your offensive strategy includes a Sabre-tooth Tiger, certain mammals will be a bit more cagey to approach you, and that’s where Primal really evolves the series. As well as hunting prey, you can choose to tame them, making them a destructive companion that’s eager to please. Pointing at an enemy and instructing your leopard to head in their direction and rip them apart, limb from limb, while you pop another foe in the head is exhilarating. If you’re wandering through the undergrowth with a tamed bear rather than a dhole, that will make smaller animals get out of your way, in fear of what might happen to them should you send your trusty bear in their direction. Ubisoft Montreal has taken a feature from the worst part of the previous game in the series and has made it an integral element of this entry and I can’t imagine any Far Cry sequel without this. As well as your ground-based buddy, your eye-in-the-sky comes in the form of an owl. When you call upon your feathered friend, you assume control of said bird and can stake out an area and tag enemies from a safe distance. There’s a certain radius you can fly around in relation to where Takkar is standing, so it doesn’t eliminate any challenge and only acts as your binoculars, effectively.

The frame is familiar, but the tweaks are welcome. As well as stalwarts like the skill trees, outposts, hunting, and a map that’s bursting at the seams with icons; guns have been replaced with homemade weaponry, the world is alive more than ever before and the usage of creatures is the type of growth Far Cry needed. Melee combat will strain your index finger because it boils down to mashing buttons and the survival elements could’ve been fleshed out more, but Far Cry Primal‘s moment-to-moment gameplay is exceptional, especially when your Sabre-tooth Tiger has just helped you take down a Woolly Mammoth.

Terrific world building.
Controlling a creature is fantastic.
Moment-to-moment gameplay is back to its best.

Far Cry Primal retains the framework of previous entries, but introduces enough to breath life into the series.