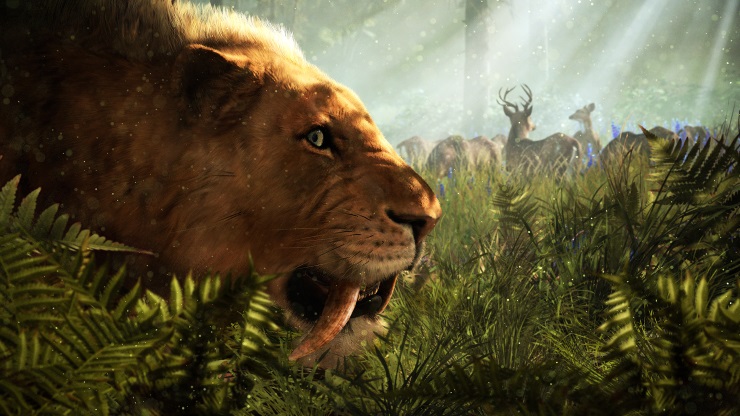 Far Cry Primal is a bit of a shot out of left-field, as Ubisoft Montreal takes everything that makes their popular open-world franchise cool and hurl it back 10,000 years to the Stone Age. Despite the change of setting and era, it’s undoubtedly a Far Cry game, featuring all the tropes of 3 and 4, including outposts to raid, animals to scream at and run away from and a protagonist who everyone trusts for no discernible reason. It’s not an overly tough game for the first few hours, and by the end-game you’ll be a veritable god despite the increase in difficulty – but it’s fairly deep. You’ll be juggling crafting, hunting, exploring, building your village, and protecting your tribe, not to mention watching your own hide in the fight against prehistoric predators, neolithic pyromaniacs and, of course, cannibals.

To help you keep your head when all around are losing theirs, I’ve put together 12 essential tips to dominate the harsh and beautiful land of Oros.

Early on you’ll recruit Tensay the Shaman. While he has a penchant for making deliciously appetising soup from blood and eyeballs, he also helps Takkar get in touch with his spiritual side. Specifically, he gives you access to your owl, the most vital tool for almost any mission involving an enemy force.

Pressing Up on the d-pad will summon your feathered friend, allowing you to survey the immediate area from above. Not only can you use Hunter Vision to mark targets, you can also drop bombs, dive-attack the enemy, set a waypoint or send your pet in for a kill. Spending skill points in the Beast Master tree will allow you to use the owl longer and more often. You can’t avoid meeting Sayla the Gatherer, a charming lass who likes to wear necklaces made of ears, right after the intense tutorial. Luckily, she has a talent for mixing potions and poultices from leaves and roots which you can find all over Oros.

Hitting Left brings up the food menu, from which you can craft and eat food with various effects, such as resistance to fire, increased stamina or the ability to mask your smell from predators. These can give you a huge advantage when hunting big game or dealing with enemies who favour fire and sport tough armour.

The frozen north of the map is a pretty daunting place, and while Karoosh the Warrior will eventually allow you to make clothing that protects you from the cold entirely, at first you’ll only be able to survive without a source of heat for four, and later ten, real-time minutes, which isn’t a great deal considering that bonfires and camp-sites are more widespread up there. But as long as you’ve got clubs and animal fat, torches are an easy way to stave off the icy fingers of hypothermia, whether you need one to see by or not.

By the time you’re six or seven hours in you’ll have unlocked and upgraded a decent arsenal. You’ll have a frightening and loyal pet, an owl to scout ahead; you might even be able to ride mammoths and sabretooths by then. But if you go into every encounter with the same tactic you’ll find it tough going. Instead, learn to make use of the whole of Takkar’s impressive array of weapons and tricks.

Arrows are good for silent kills or precision headshots. Spears are powerful and accurate, but they make a lot of mess and you’ll never be able to carry more than four at a time. The club is great up-close and does decent damage when thrown, but it can be inaccurate and clumsy against smaller animals and quick-footed foes. Remember your bombs and throwing shards, and learn the pros and cons of using one or two-handed clubs, the shortbow or double-bow, and the advantages of traps. Far Cry: Primal gets tough in the later game, and you’ll need to maximise your efficiency to stay alive.

At first, getting stuck out at night is dangerous and a little bit scary as you wander around with your torch out, jumping at every rustle of the undergrowth. As you grow stronger and your arsenal improves, you’ll realise that going out at night can be handy. For one, there’s an abundance of wolves and you need their skin for a lot of crafting recipes. You’ll also find rarer predators out under the moonlight, and you’ll often come across Udam and Izila tribesmen snoozing or chatting round campfires for easy XP and loot.

Taming animals is surprisingly easy, and while it’s handy to have a furry buddy to help you murder your foes or ride around on, taming is also a good way to get out of trouble. I recently found myself surrounded by angry mammoths and enemy tribesmen with my sabretooth bleeding out, when another one unexpectedly joined in the fight. Rather than even try to reach my pet (sorry, Lucy), I crafted some bait and hurled it, then simply tamed the newcomer for an instant ally. Oh, and Bait is also a great way to get an angry, tenacious bear off your tail long enough to get away.

7. WINNERS TAKE IT ALL

This kind of goes without saying, but you should try to take absolutely everything you see. If your pack is full it won’t tell you until you’ve tried to take something, but the resources will randomly respawn all over the map. You need lots of things like reeds, maple and rock dust to upgrade your village and weaponry, so it’s best to pull up everything you see. Likewise for the dead: loot every corpse and skin every carcass, it will help you maintain a good supply of meat, hardwood, animal fat and hide.

The Wenja are a hardy bunch for sure, but they’re not all that smart or cautious, and you’ll always find them in trouble. They might give you straight-up side-quests that appear on the map, or they’ll wait for you where you see an orange circle. The latter are always one of several mission types that usually only take a few minutes. They’ll often want you to escort them somewhere, kill a pack of animals, or retrieve something from a nearby cave.

Alternatively, dull gold diamonds that appear randomly signify Wenja Events; these don’t last long but offer decent XP rewards and population boosts if you get there quick enough, and usually only require a daring rescue. Completing tasks for people can sometimes feel like busy work, but it’s a great way to earn XP and respect.

9. GO FORTH AND CONQUER

It might look different, but Primal is very much a Far Cry game. It may have replaced military camps with tribal outposts and radio towers with bonfires, but there’s still an onus on exploration and advancement. Inch your way across the map, daring to tackle the red-coloured bonfires and forts as you go to unlock fast travel points, and claim bonfires to secure spawn points in the event that you catch the business end of an Udam spear or a grizzly paw. Be brave and make your mark, and progress will be much easier.

The more villagers you have and the more advanced the huts of your lieutenants (for want of a better word), the more goodies you’ll find in your Reward Stash every morning. It can make a real difference after a tough mission or hunt to replenish your stocks without having to go out risking your life straight away. You’ll often find shards, meat and resources in there, and later on you’ll occasionally find rare offerings, too. Remember to check it every day.

As soon as you’re able, head out to recruit Karoosh the Warrior. He’s the furthest main NPC away from your base village, but he may be the most useful next to Tensay. He doesn’t provide the weaponry boosts like Jayma the Hunter or the gear upgrades like Wogah the Crafter, but he does offer winter clothing, the two-handed club and, most importantly, the Mammoth Rider and Beast Rider skills. You’ll find him under attack by Udam and will need to protect him in order to recruit him, but it’s not so tough if you’ve got a strong pet and a good supply of arrows. After he returns to your village you’ll have access to his skill tree, and 3 Skill Points later you’ll be able to mount younger Mammoths for transit and combat. The last skill on that particular line lets you mount and ride your own sabretooth or grizzly, which is exactly as cool as it sounds.

Oros is a tough neighbourhood, and one you’ll need to acclimate to if you want to survive. Pay attention to the map for which animals roam which areas, listen for the tell-tale signs of approaching predators like big cats and God-damned eagles, watch your footing on cliffsides and remember to use Hunter Vision before going for a swim: crocodiles and bitefish can both be deadly to the unprepared. Ultimately, the best way to stay alive is to stay aware. You can walk into trouble at any time if you’re not careful, and death is never much fun. Go sightseeing if you want to, but always be ready for a tussle.

Senior Content Editor Mick has been playing games for over 30 years and writing about them for around 12. After drifting from site to site for a while, settling briefly at the now-defunct Made2Game and freelancing for the gone-but-not-forgotten NintendoGamer Magazine, he came at last to rest at Godisageek. Mick has been a reviewer, staff writer and content editor here for some time, while also moonlighting a little for Red Bull Games. He has 4 kids, has written 2 novels, and sometimes even manages to pay a bill or two. You'll usually find him defending the galaxy in Destiny 2, battling evil in Diablo 3, or lurking in the background on Twitter. Find him there @Jedi_Beats_Tank, or on XBL (JediWaster247), PSN (Jedi_Waster) or Nintendo (JediWaster).
MORE LIKE THIS
far cry primalUbisoft