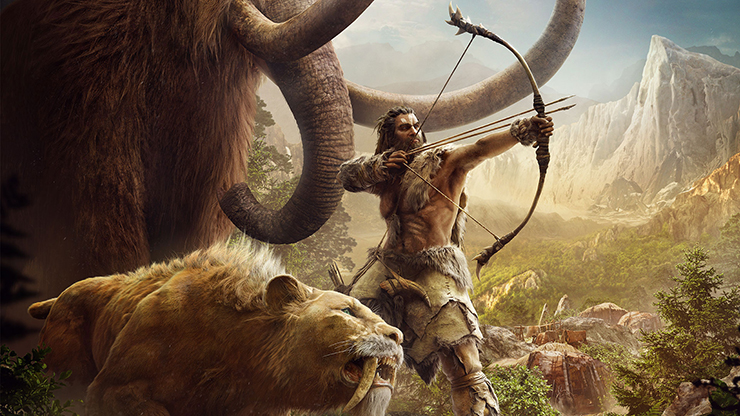 Jason Graves is a BAFTA award-winning composer responsible for some of the most immersive and epic soundtracks in the history of gaming. His latest challenge has been Ubisoft’s open-world caveman adventure, Far Cry Primal. I’ve been playing quite a lot recently and there is so much going on in terms of its score; it never fails to amaze me at how diverse Jason’s music is regardless of the story or setting.

With working on games that are mostly linear, writing a score for such a huge game was surely his biggest game to date. “Oh definitely, and it’s a franchise so there was the usual concern personally about being able to carry on the torch, but also reiterate what other guys have done before. Fortunately none of the other Far Cry games were cavemen games so that made it pretty easy to distinguish and make different.”

You always have to wonder what kind of freedom a composer gets in writing their music, especially when the game they’re writing for is being developed by a company as big as Ubisoft. “Yeah, there was a lot of freedom, but Ubisoft really knew what they were doing. They didn’t just say anything goes. They had very specific ideas; they didn’t want regional kind of sounds – they didn’t want it to sound African or South American. They didn’t want it to sound futuristic, obviously. They wanted something that would not necessarily fit as a piece of music back then, but the kind of sounds that would sound very natural and organic.” The kind of backbone of the score is the drums, and it doesn’t make it specific to any regional, it just makes it feel very tribal. One of the things I love about the soundtrack is the screams of the tribes, like in the track ‘Fires of Conquest’ and the haunting whispers on ‘Visions of Fires.’ Jason was pretty chuffed I’d picked out these tracks as he was a big fan of them himself. There is such a deep though process going into his soundtracks, and in Far Cry: Primal, he had a certain idea in mind. “So, you’ve got these three tribes in the game, right, and I was really intent on doing something really different for each one of them. For the Udam I used no actual instruments, it’s all bushes and dirt and clay pots. For the Izila, I used an Aztec death whistle that goes really well with Malukah’s voice.”

“Malukah is a wonderful singer, and she did all of the screams, chants and whispers for the Izila, so when you hear that female vocal, that’s her – it was super inspirational.” Jason also used a different approach to the way he wrote the soundtrack, especially when incorporating Malukah. “I kind of worked backwards from the way most people would; I did not write a piece of music, send it to her and say “sing to this”. I just sent an idea, like one combat track and basically said “don’t sing over this directly, but sing things you think could be inspired by this”. Then, I took her pieces and picked certain things and wrote music around it. The music works even better with her vocal because I literally wrote the vocal to what she had already done.”

We talked a little more about the power of the vocal and how commanding it is, especially with the wood instruments surrounding them. “It just cuts, doesn’t it? That was the coolest thing – there was no metal in the score. It was all skin drums and wooden shakers and stuff like that, so as soon as you put those vocals in there they really sit naturally. I love the idea of having one wind instrument and one vocal for each of the tribes. Like I said, for the Izila you have the Aztec death whistle and Malukah’s vocal. For the Wenja, you get lots of different kinds of flutes and these low sort of drones in the more reflective moments of the game. Then, for the Udam you get these big horns and my vocal which is a caveman’s grunting, breathing sound.” Jason kept talking about the Aztec death whistle and it fascinated me. I mean, how the hell do you even find one? “Well, the Aztec death whistle was the sound that I thought would totally make the score, and that was something that Ubisoft had found when they were researching that tribal stuff in general. They discovered some YouTube videos of someone playing it and they showed it to me as a reference, not saying “go get an Aztec death whistle”, but maybe you could do something with textures that sounds really interesting like this. I found a guy in the States that makes very accurate recreations so I ordered a couple.”

Writing music for open-world games must be a completely different process to writing a game with a definitive path. There are plenty of sandbox titles that allow you to explore the map and do whatever you want. I was curious how you’d write for the times you spend just wandering around and not doing any of the main missions, and how the game triggered certain tracks. “The easy answer is that you just write a lot of music. The slightly more detailed answer is the score is split in half. The first half that I did was the mission music, so we knew when you are hunting a woolly mammoth these certain events would happen and this music was written for these events. The second half of the music was for all of the open-world music, and that was more about geographically where you go through the map.”

It was also interesting to know Jason puts in subtle links between certain areas of the game by referencing each of the three tribes. “When you start crossing in to Izila territory the music will start to have an Izila flare to it and you’ll hear Malukah start to chant and some death whistles in the background. You’ll know you’re getting into Udam territory when you hear those low horn things and the caveman grunting. It really gave me a lot of freedom because there were specific things for the mission music and general things for the open world – it was a good balance.”

As much fun as talking about Far Cry Primal was, Jason Graves wrote the music to Dead Space, which in my book is one of the greatest horror games ever. I didn’t want to miss the opportunity to talk about it and how he managed to build such tension as you played through it. “I’m glad you mentioned Dead Space because so much of that tension and anticipation the player feels when they’re going through a certain corridor comes down to implementation – the way the music’s put in the game,” Jason began to talk about one of the industry’s finest audio directors and I was fascinated.

“I learned this on the first Dead Space. Don Veca was the audio director. He’s at Activision now doing all the Call of Duty games and still winning awards for all the audio that they do, but he made a big point; it didn’t always matter what you did on the boo, or scare moment, it was all about the build up to the boo; it was all about the tension and the atmosphere and the apprehension.” It always came across in the way Jason spoke about how respectful he was of his peers and those that have taught him along the way. “That was his mentality when he was putting the music in the game and the rest of the guys picked up on that and it started shaping up a lot of how the gameplay came together. So it is a lot of implementation, and the music has a lot to do with it as well, but is about slow, steady, wide movements with the music. Let the listener’s mind wander a little bit to where the next beat is going to come in; we can imagine things that are a lot scarier than anyone can ever put into a game.”

Over the last decade, music in video games has reached new heights and there are plenty of composers who’ve written some incredible scores. It’s always interesting to know what composers think of other composer’s work, and it turns out that Jason is a big fan of Jessica Curry. “I love all the kind of stuff Jess has done because she started with, at least one of the first things I heard, was the Machine for Pigs soundtrack, which actually sounded a lot like a chamber version of something that I would have done for a Dead Space game. I met her for the first time in London when I was recording at Abbey Road. She came by the studio and I was so taken with how wonderful and charming, and enchanting she was as a person. We’ve become good friends, and the Rapture score was just gorgeous.”

Jason’s love of Jessica Curry got me thinking: would Jason like to write for a smaller, wander-game like Everybody’s Gone to the Rapture? “Oh I wish. Things like that just leave so much room for the music to breathe. You can kind of sit back and relax a little, where a lot of these shooters or games that deal with a lot of interactivity, whether there’s a level of intensity or ambience, you have to maintain something. There’s got to be something going on so when that’s triggered you know something’s going to play, and when that combat music comes in you need to make sure it’s at a minimal level of X. It would be wonderful to be able to do stuff that can breathe, and can have some quiet spots. Yeah, I would really love to do something like that.”

Jason isn’t as big a gamer as he used to be, but we got talking about our kids and how growing up and having families has allowed us to pass the video game torch to our children. “I enjoy watching them – the LEGO stuff is fun, and we’re playing through Limbo right now. Also, they love Hohokum.” It was so nice talking with Jason; he was incredibly humble and down to Earth, talking openly about the hard work he has put into the Far Cry Primal soundtrack amongst other things. It also turns out Jason keeps his ketchup in the fridge, which knowing this makes everyone here very happy. “Well, we’re American so I don’t know if that makes a difference, but we keep our ketchup in the fridge.”

Video games are cool. Don't let anybody tell you any different.
MORE LIKE THIS
Far Cryfar cry primalUbisoft