It hit me whilst cruising through the sun-kissed streets of Yara in a Beaumont Valentina, singing my lungs out to Livin’ La Vida Loca by Ricky Martin (the protagonist, not me) without a care in the world. Far Cry 6 is just insane. Like, bona fide bat shit crazy. One minute I’m chasing a mongoose for a key to some treasure, the next I’m having my molars ripped out. I’ve defended a surgeon performing an operation as buckets of grenades are thrown at me; dived off a hundred-metre high cliff with a shark painted on the side of it; sent a rooster into cockfight in the style of Street Fighter; and reclaimed a prehistoric theme park back from a bunch of soldiers.

CHECK THIS OUT: Being back in Bright Falls is a great feeling | Read our Alan Wake review

To say I’ve had a lot of fun would be a massive understatement. Far Cry 6 is a bottomless toy box for adults. Guns, bombs, cars, planes. Weaponised backpacks and animal sidekicks. The sky isn’t even the limit to the amount of things you can do. I spent almost 70 hours playing the previous entry in the series, and after a few hours in Ubisoft’s latest, it was apparent how bigger everything was. The map is gigantic; the vehicles range from tanks to fancy cars to horses; and the guns…oh, the guns. Despite it being chaotic almost all the time, it’s story has a lot of heart, and plenty to say about despotism and those living under the weight of a dictator. 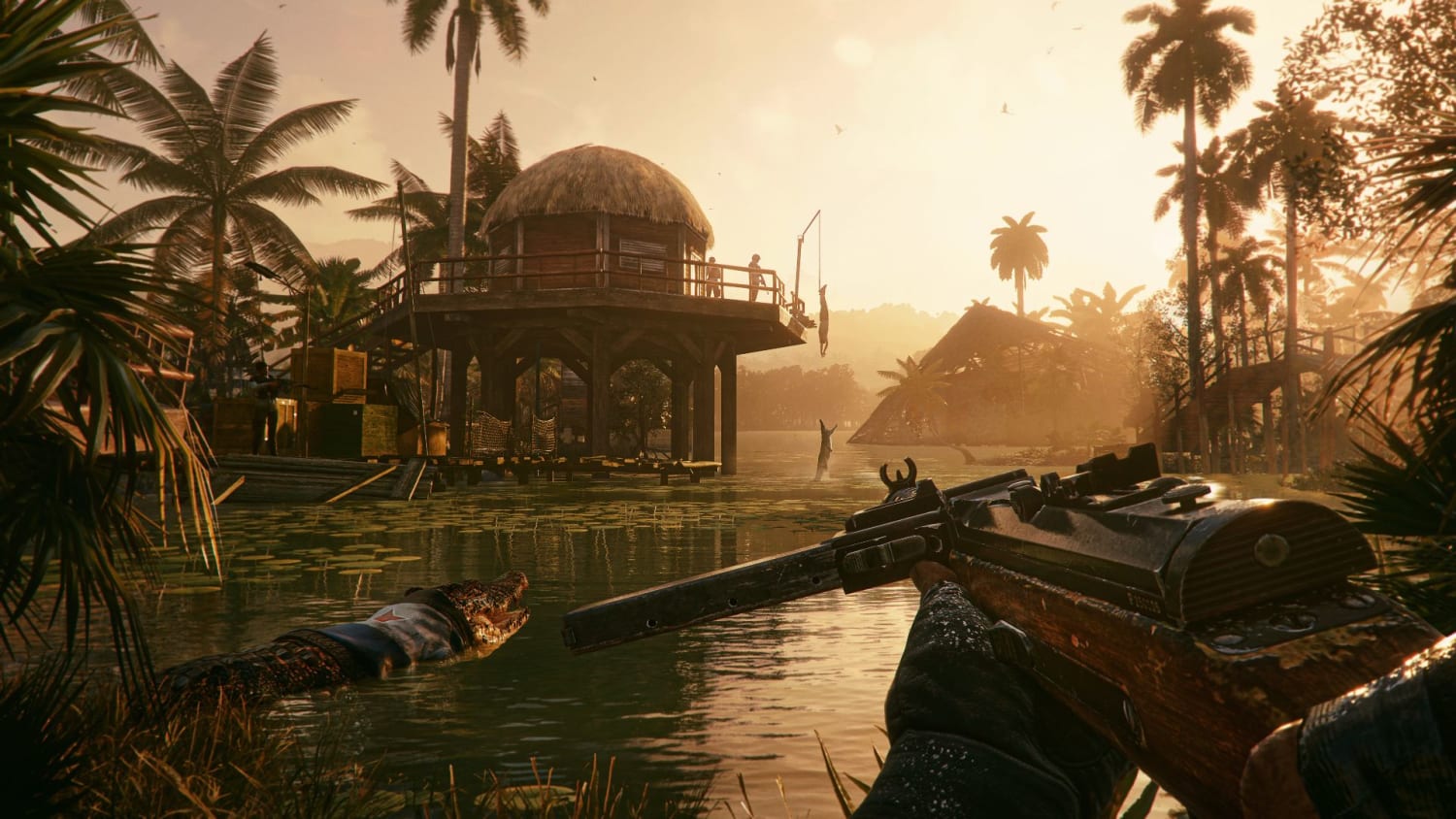 You play as Dani Rojas, a person who helps a revolution gain traction in Yara. Playing as either a man or woman, you must bring various guerrillas together to topple Anton Castillo (voiced superbly by Giancarlo Esposito), a man hell-bent on ruling Yara with an iron fist. Unlike Far Cry 5, Rojas is fully voiced. It’s hugely important, especially as they’re someone who are passionate about their freedom and fighting for change on such a huge scale. Castillo believes he is a good man, helping to cure cancer, but is oblivious to the actual cost of doing such important work. He’s a vile human being, but in his head he’s a god.

A gripping tale of revolution

The supporting cast of characters are all fantastic. Juan Cortez is an old-timer who’s seen a lot of war before. Yelena is young, but has felt the wrath of Castillo from a young age. Jonrón is a young and fierce guerrilla, but she has a lot to learn. A lot of the cast fit into the story so well, never feeling like bit characters. They are given time to shine in their own spotlight, and each one is passionate about making Yara great once more. As for Yara, it’s heavily influenced by Cuba. With so much bloodshed and fierce leadership, it feels somewhat stuck in the 1950s. Like an old photo, come to life. There’re jungles, shanty towns, beautiful beaches, and abandoned zoos. It’s both beautiful and ugly all at the same time. 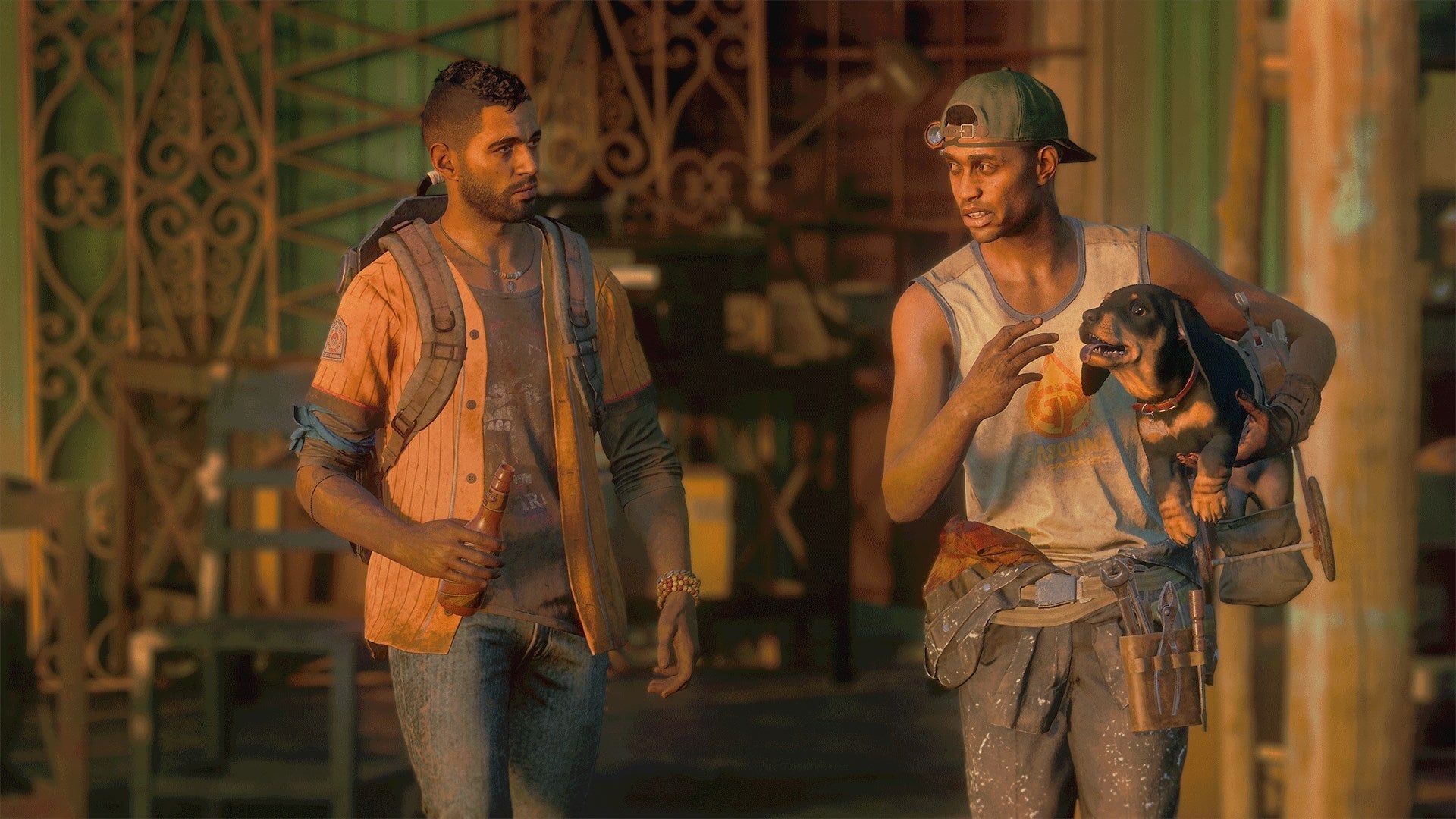 The main crux of Far Cry 6 is similar to the majority that came before. Complete main missions to progress the story. Infiltrate bases and outposts by turning off alarms and liberating them for your own use. Take part in side missions that give you extra stuff to play with. The main difference here is that there is just so much on offer. Let’s go back to the weapons for a second. You can unlock or buy a large amount of rifles, shotguns, and sniper rifles, as well as other things like a gun that launches compact discs at sickening speeds towards enemies. I realised about 20 hours in that I’d been using the same weapon from the start, but if you’re fond of variety, Yara has you covered. If you’re in it for the long haul, I doubt you’ll ever want to – or be able to – stop playing.

You can now upgrade weapons on workbenches scattered around the map. By collected scraps of metal, broken glass, and other parts, new mods can be built that improve your weapon of choice. Along with the vast array of guns, you have a backpack called a Supremo. New ones can be bought or unlocked throughout your time in Yara, each with a unique ability. One deals poison damage and another emits an EMP wave capable of knocking out all alarms, as well as enemy helicopters from out of the sky. Again, I only ever used three particular ones, but there’re loads for you to get your hands on. After causing chaos in Yara, a gauge will fill up, indicating its main power can be used. It’s quite the game-changer. 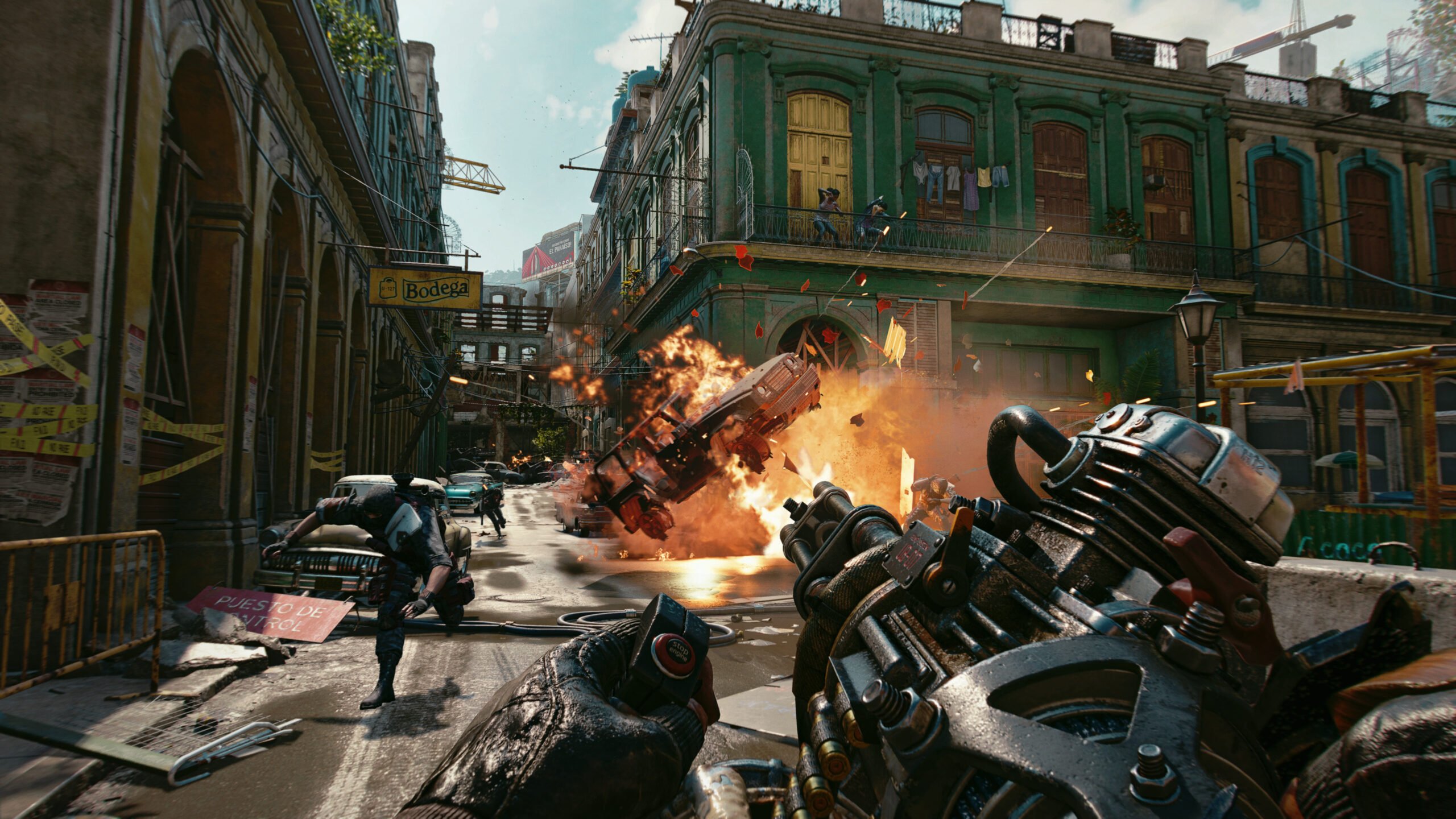 A lot of the gameplay is very similar to the previous instalments. Apart from using the Supremo, the familiar gunplay and movement remains untouched, albeit sharper and more responsive. On PS5, each weapon feels different thanks to the haptic feedback, and there’s resistance when you pull the trigger. The same goes for driving, piloting, or riding. It’s one smooth beast, with wonderful control in every area. Although it feels similar, the environments are so different. With so many locations to visit, some places require more verticality and free-running than others. You’ll never visit everywhere in one sitting unless you plan on finishing every piece of side content.

Take Esperanza, for example. It’s the only proper city in Far Cry 6. You won’t be heading there early on, but when you do, it has a much different feel. Your approach is more along the lines of using rooftops to avoid conflict and climbing ladders to get off ground. There’re tons of enemies in Yara, but you don’t have to fight all of them. Weapons can now be holstered, meaning not all soldiers try to blow your brains out the moment they see you. It’s a small yet smart addition to Far Cry. Even though you’re in the middle of a revolution, not everybody knows the name Dani Rojas yet, or that you’re a member of Libertad. 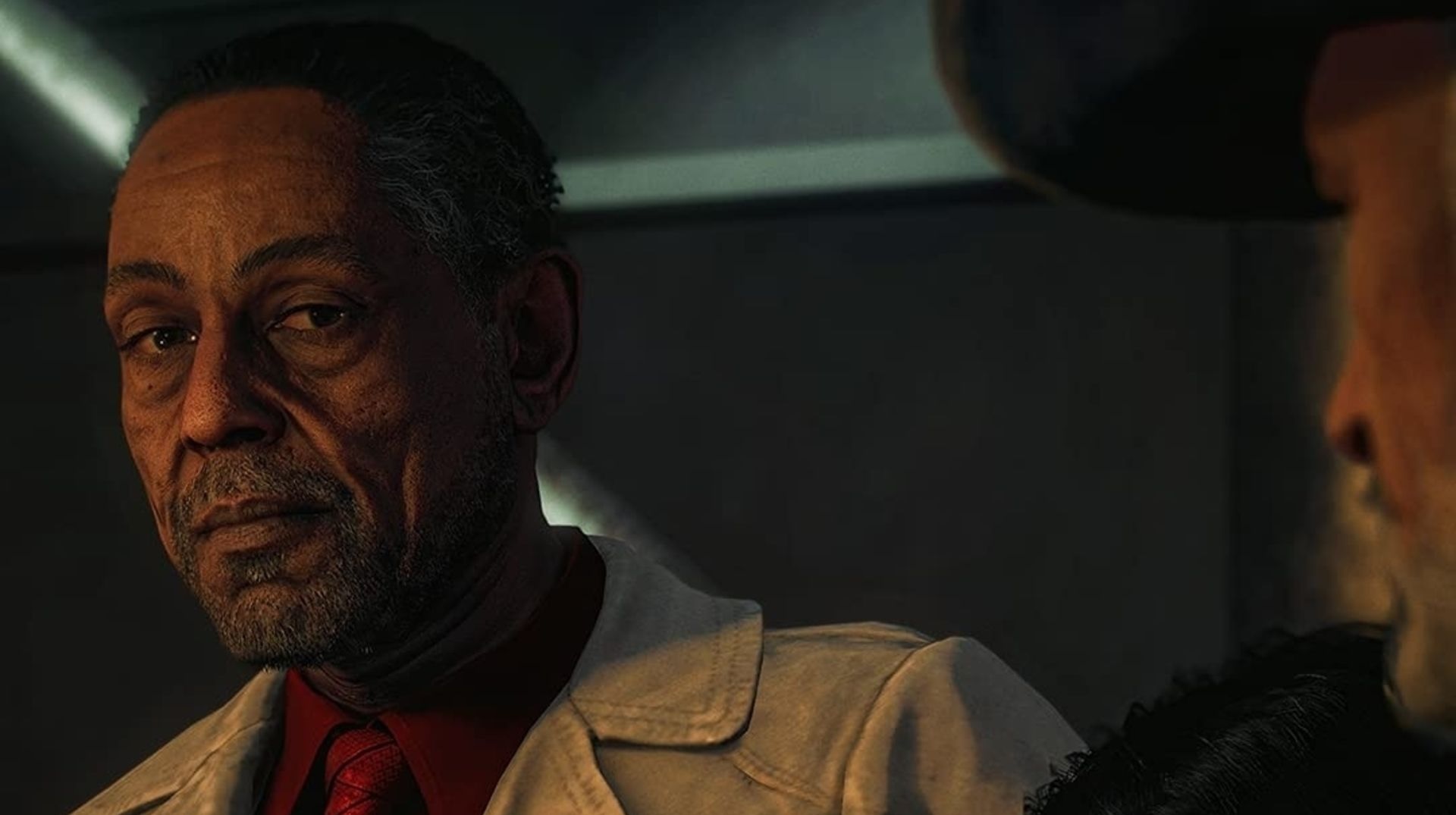 Yara is enormous. With a map so big, there’s more than enough to keep you occupied. On many of the roads, Castillo’s men have set up blockades for you to destroy. There’re anti-aircraft canons that need destroying so you can fly overhead without being shot down. The soldados (soldiers) are everywhere, reflecting just how much of a hold Castillo has on Yara. Thankfully, this means you can cause as much chaos as humanly possible, however you want. The huge bases that the army occupy have vehicles you can unlock, and there are various FND caches scatter the map for you to find. Fancy intercepting an FND convoy for camp resources? Want to race the army to a supply drop and get the gear before them? Go right ahead.

As you build friendships across Yara, you’ll be able to upgrade the camps for where your new allies live. Medicine and metal can then be used to build new buildings that offer everything from special hunting spots and fishing locations to improved Guerrilla support when taking on certain missions. From these camps, you can team up with players online to complete special missions, and also fight as chickens in cockfights. Yara Stories involve completing missions for side characters, and they help to flesh out their stories. Fangs for Hire are now called Amigos. You can complete missions to unlock new animals to support you in your revolution, all with individual skills to help you out. There’s just so much to do you’re never going to be bored. For some, this will be overwhelming, but for those who love Far Cry 6, it means you’ll have so many reasons to keep playing. 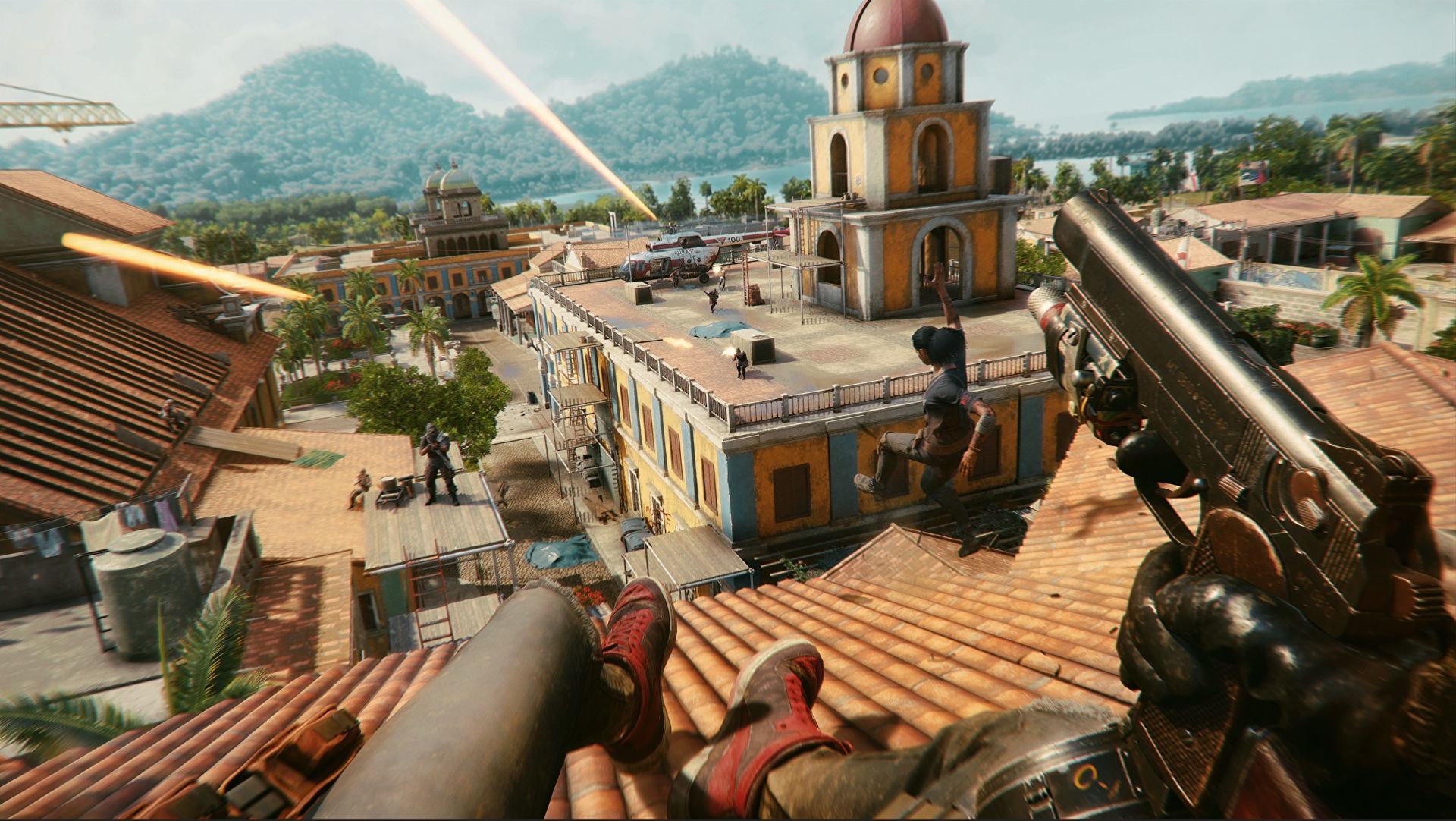 Far Cry 6 also gives you a special car that can be called at any time from your weapon wheel. It can be upgraded with different weapon types or colours, as well as decorations and horns. More cars can be unlocked for you to call instantaneously by taking part in special races as well. The sheer amount of content on offer will be overwhelming. I found I barely used the workbenches to upgrade weapons. That was mainly down to the fact I had my set weapons that I liked using. I stuck with the same car and rarely went fishing or hunting. I had enough gear that all the other stuff felt arbitrary.

CHECK THIS OUT: BPM: Bullets Per Minute features addictive gameplay and a great soundtrack | Our review

Similar approach, but bigger and better

Still, Ubisoft has put a hell of a lot of work into giving the player hours and hours of stuff to do. Whilst the same formulaic approach features, it’s so enjoyable blowing stuff up and killing the hundreds of soldiers. Other touches like using certain ammo types to take out enemies plays a roll, but again, I never really switched up weapons for a better effect. I was so invested in the story, and watching these affected guerillas, both young and old, fight together against a dictatorship needing to be overthrown was more than enough to draw me in. It’s more Far Cry, except this time it’s bigger and better. I’m a sucker for Far Cry, and even though there sometimes feel like there’s too much on offer, I enjoyed every second.

Far Cry 6 is a massive game, with plenty to do and see. It features a gripping story and combat that plays like a dream. I had so much fun doing everything I possibly could, and I'll be diving back in to finish off all the side content.