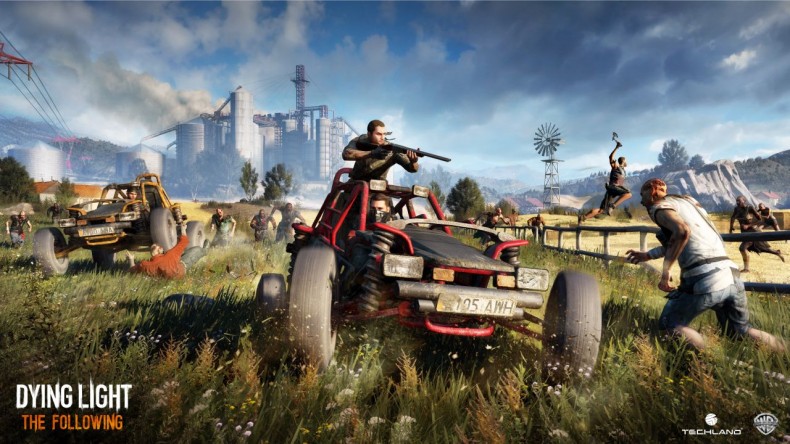 Dying Light was better than we thought it was going to be, let’s be dead honest. Not only that, but it continued to get better after release thanks to the constant stream of downloadable content with which Polish developer Techland kept us sweet. The Bozak Horde endurance challenge, the table-turning “Be the Zombie”, mode and a suite of blueprints, weapons, and outfits for beleaguered hero Kyle Crane spoiled us, and many were pretty happy before the announcement of full-fat expansion, The Following.

You can jump into the expansion from the main menu whenever you like and export any of your saved characters in, although it recommends you be at least Survivor Level 12 (which takes between 10 and 15 hours on an average first-time playthrough). Level 12 is important because that’s when you unlock the grapple, unarguably the handiest tool in the whole game.

The action is relocated from the sun-soaked backstreets of Harran to the sun-soaked countryside just beyond Harran, but don’t be dismayed: The Following is huge. A map almost as big as the main game at first seems worryingly open; as you first gaze upon its daunting breadth (and you get that opportunity very early on, cleverly) you may well worry that it’s too open. You’ll wonder how they’re going to make empty fields and idyllic countryside vistas menacing. Well, they manage it.

Before long, you’re up to your arse-pockets in shamblers, the majority milling around together in fields like blood and gore-soaked sheep. Switching the city for the country at first seems like it might mute the fun somewhat: the reduced need or opportunity for parkour is counter to what made Dying Light so playable in the first place – but thankfully, this expansion replaces break-neck sprinting with break-neck driving, and it’s just as insane. Where Harran was custom-built for climbing, leaping, and grappling away from the infected, this is a stunt-driver’s paradise.

You find yourself behind the wheel of your own buggy within the first half an hour or so, and from then on it’s entirely your responsibility (although, it’s not the only one available). You’ll need to upgrade it, repair it, and refurbish it, but if you thought the weapon durability was irritating in the campaign, this won’t make you much happier, at least not initially. Constantly having to scavenge for fuel subtracts a little from the fun, but it’s at least in keeping with the core ethos: you’re up shit-creek with more than enough paddles, but you keep snapping them on zombie skulls.

Luckily, the buggy handles just how you’d expect: like a bolt of greased lightning stuck in the back-end of a runaway colt. Spinning bloody donuts into the corn-rows is about as cathartic as it gets, and every zombie smushed under your wheels grants XP in the new driving skill tree. It feels no slower zipping from mission to missions on four wheels than it did on two feet, but I did occasionally miss the down-and-dirty feel of escaping a flesh-eating horde by springbokking across the rooftops.

The story of the new content is a bit throwaway, focusing on Crane’s investigation of a cult who are immune to the virus even after being bitten. It’s more creepier than the main campaign, but the characters are less interesting than Rais, Brecken, and Jade – which is saying something. The script is still hammy, though, and Crane is no less dumbfounded by everyone’s unwillingness to pull together and help him out amidst the crisis.

Extra guns and ammo are welcome, but they’re still too damn loud to over-indulge. Thankfully, the new crossbow is silent and just as lethal. It’s not as much fun as unloading with a military rifle or shotgun, and it’s not as therapeutic as running the bastards down, but it’s more effective and doesn’t attract virals. That being said, you’ll come across the special infected fairly often – and you won’t always be ready. The Following has a steep difficulty curve and if you’re not ready for it, either where XP or gear is concerned, you may find it a genuine challenge as your under-developed buggy bounces clean off a hulking meat-wall and you’re forced to bail in the middle of a ravenous horde.

Where Dying Light’s end-game was a bit of a reward-less grind after you’d maxed out your three main skill trees, The Following adds yet another tree titled legendary. Stacked with a whopping 250 levels, climbing it introduces incremental perks and boosts to Crane’s performance that make busting heads, leaping fences, and completing missions worthwhile again. The new buggy-based challenges are a treat, even if they do cost you valuable resources – though it’s no different to wasting medikits and metal parts in the standard challenges.

Aesthetically, the change of scenery is hugely welcome. Harran is a gorgeous game-scape, don’t get me wrong, filled with things to do, secrets to find, and breathtaking views to sit and enjoy while the locals try to eat you – but the wide-open spaces of the expansion are occasionally almost humbling in their scale. From the opening descent down a mountain – complete with waterfall and ominous, Far Cry-style rock paintings – to desperate races across moon-dappled fields when you venture out at night, it’s an incredibly good-looking adventure, only marred by odd visual glitches and a smattering of slow-down here and there.

Most importantly, this feels like a true expansion. The new area is huge, and it introduces an entirely new gameplay mechanic that slots straight in as though it was always there. The addition of legendary XP levels and the ninja-like crossbow give you a reason to re-visit Harran and mop up those side-quests and challenges you may have missed, while The Following itself is the perfect way to mix it up and challenge yourself anew, even after you’re done with the story.

Review code provided by publisher. The PS4 version of the enhanced edition was also tested and our score for that version should be considered the same as that of the expansion.

Still takes a while to truly get going.
Story takes a backseat0
They still haven't ironed out the glitches0

The Following is a huge expansion that swaps the ruined city for the rugged countryside, but loses none of the desperate thrills of the original campaign.