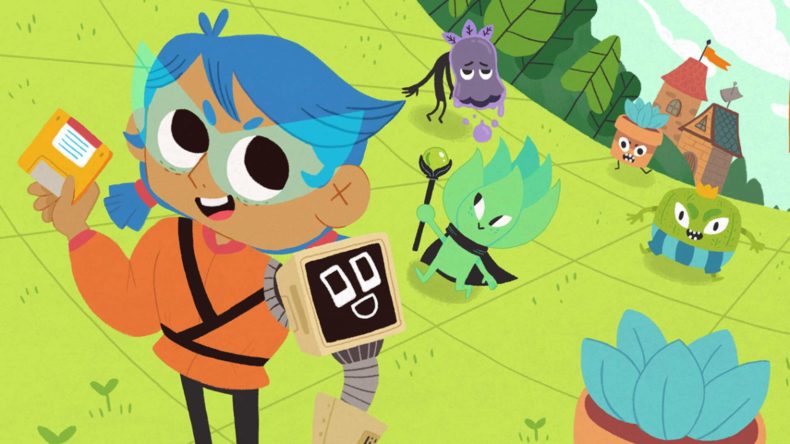 Although I enjoy a good tactics game, it’s a genre I often find myself struggling with. Strategic thinking just isn’t my strong point I suppose, and it takes something special to help me make it to the end of a game that requires it. Fortunately Floppy Knights combines the tactics with deck building, to create a truly spectacular and innovative experience.

Phoebe lives in a world full of magic, but has always been more interested in machines than casting fireballs. With her parents desperate to convince her to pack in her tinkering, Phoebe creates Floppy Knights to prove them wrong. These little dudes can be summoned from floppy discs and will do your bidding, so obviously Phoebe decides to use them to perform oddjobs so that she can make some bank and move into her own place. 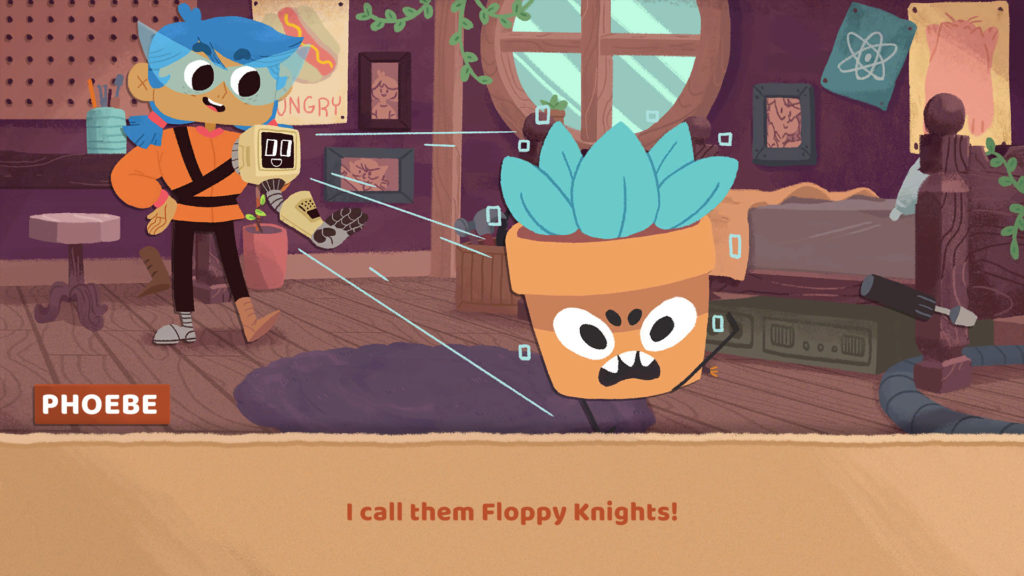 These oddjobs quickly turn into turn-based battles on a grid, with a twist. You need to use cards to control your army of creatures. Each turn you’ll draw six cards from your deck, and can spend energy points to use them. At a basic level these cards will allow you to move and attack with your units, but you’ll also get new knights, cards that draw more cards and buffs in your deck before you know it.

At the start of each battle you’ll be able to place your chosen commander (initially a big humanoid plant with a sword), and if they are defeated you’ll instantly lose the level. You’ll need to summon an army of other plants to defend him, each with their own strengths and weaknesses. The cactus attacks every adjacent enemy at once, the mushroom uses a poison slingshot to inflict damage and status effects from afar, and the potted plant is cheap to summon and give you a free movement card. It’s always exciting to unlock new Floppy Knights by beating missions, and shove them in your deck.

Deck building is a huge part of Floppy Knights, because you won’t get far unless you bring the right cards to the mission. It’s all well and good bringing loads of buffs and healing cards, but if you don’t draw a movement card or two each turn you’ll be a sitting duck. Balancing offence and mobility is tricky, but when you draw the perfect hand and take down a wall of enemy units it’s all worthwhile. 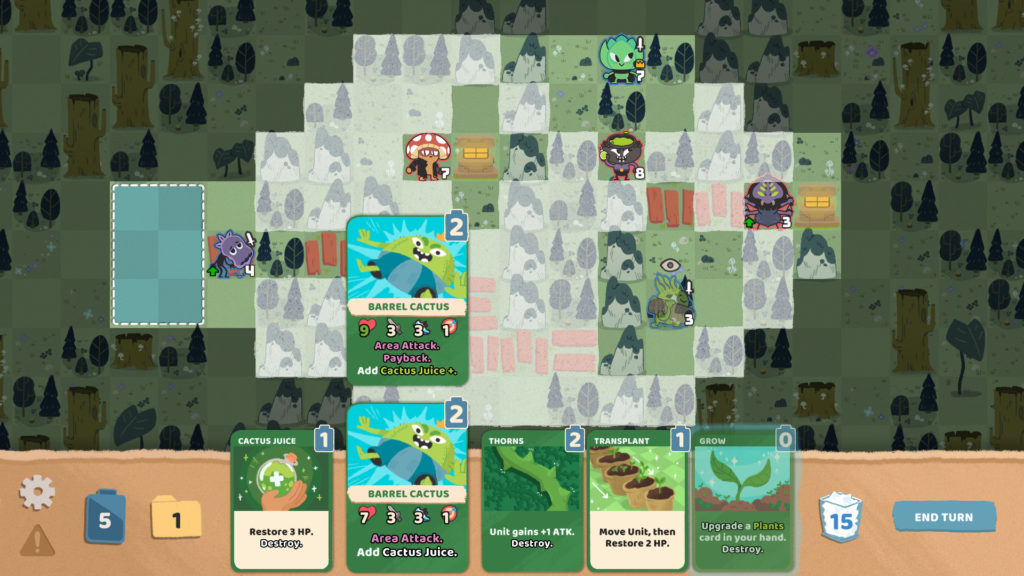 Each mission in Floppy Knights feels completely different from the last, with a whole host of objectives to accomplish. Occasionally you’ll just need to beat up all the baddies, but there are also missions where you need to capture and hold a specific square, steal a flag, or in one instance even attack a giant’s fingers so he falls off a mountain. As well as the main mission, each stage has a side objective to aim for if you want some extra currency and cards.

Complete enough objectives and you’ll bag a nice pile of coins to spend at the shop. After most levels there’s new cards added to the shelves, and if you want a more consistent deck you’ll need to grab them.

Don’t worry too much about running out of funds though, because you’ll be able to stock up on gold in bonus missions. Every time you beat a world you’ll get access to these tactical challenges, which give you a premade deck to beat a previous stage with. It’s an interesting change of pace, and gives you a chance to check out different strategies to add to your own decks. 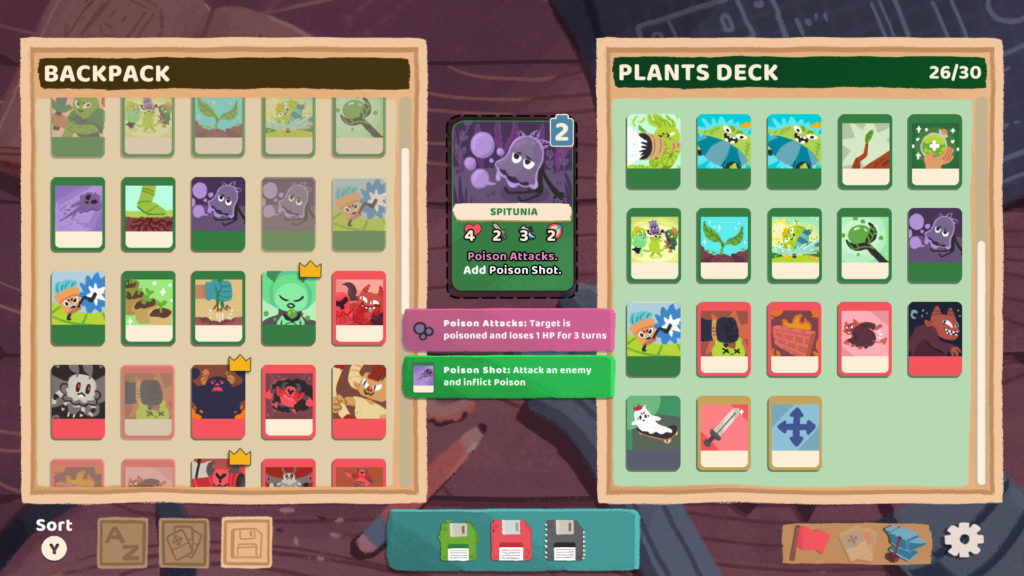 The sheer variety is really what sets Floppy Knights apart from other tactics games. Each new world introduces all manner of new mechanics, from lava and flaming boulders to enemy spawn portals and full on fog of war that hides your enemies. It’s always a treat to see what’s next and try to adjust your decks accordingly.

I really love so much of what Floppy Knights brings to the tactics genre, but it does have an unexpected issue – it occasionally suffers from slowdown. It seems bizarre that the Series S would struggle with a 2d tactics game, and although it doesn’t really affect the turn-based gameplay it can get a little distracting.

Floppy Knights is one of the best tactics games I’ve played in a long time, and can easily hang with all time greats like Fire Emblem and Into the Breach. The combination of turn based strategy gameplay with deck building is exceptional, and the variety of the worlds and objectives keeps the game fresh from start to finish. Available on Game Pass from day one, there’s simply no excuse to miss out of this delightful genre mashup.

Some very unexpected slow down

Floppy Knights combines card game and turn-based tactics to create an experience that demands to be played. And it’s on Game Pass now!

You may also like
Day one Game PassFloppy Knights